Its not often I brew a low alcohol golden ale. That’s mainly because these days the UK cask market is swamped with them. Every brewer has a golden session ale (or seven) and these days I am often inclined to to think the style is becomeing a bit of a sellout. It’s almost like every pub you visit selling cask ale has some kind of session golden ale on of some kind, and this is not ideal for those seeking the diversity of beer as beer hunting can become repetative. In a sense (and OK these beers don't quite dominate the cask market completely yet) you could argue this limits consumer choice.

But out of intrigue I decided to brew one of my own golden ales at work using my home brew kit and for the first time its came out rather quaffable. The thing I found with golden ales brewed at home in Alnwick is that they always had some minor defect (probably due to inferior water and available wort cooling systems). Mild ales I admit I did rather well in Alnwick, probably due to the colored malts balancing the acidity of the water I suspect is high in bi-carbonates. But never golden ales.

I have also always had the problem of low gravity beers attenuating too far and this occurred with this brew adding dryness to the finish but it kind of adds to the drinkability. My 3.5% golden ale is brewed with lager malt, pale malt and torrified wheat, and hopped with Willamette, Cascade and Styrian goldings hops. The other night I brought 3 bottles back home so I could try one for quality control testing thinking it would be a bit young at just over a week old, hazy and immature. But it had almost dropped bright and tasted delightful, I ended up drinking all 3 bottles. 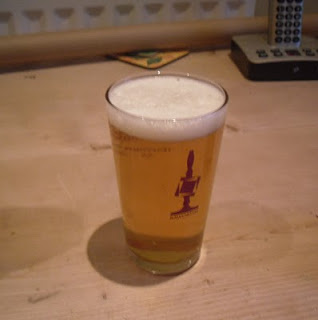 I shall be brewing more low abv session beers in future. The problem is they tend not to keep for a long time so (and this has happened before) much of it can go stale and get wasted. If anyone in the northeast out there is willing help out drinking my stock I would be happy brew more low gravity beer and spread some bottles around.
Posted by Rob at 07:05