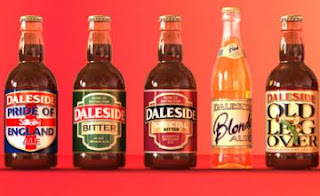 This is kind of an off the wall fantasy post based on what I was thinking about the other day, which was 'what would I do if I owned Daleside brewery?'. I'm sure every beer geek fantasises about the romantic side of owning a brewery and brewing their own beer. OK I will probably never own Daleside, and am not sure if I would ever want to, but if I did the following ideas would be carried out.
Morocco Ale:
This most recognised speciality beer will be permanently intensified from its standing 5.5% to 7% abv. Special 'single batch reserve' batches will be aged in port, bourbon and Madeira oak casks for bottling. Announcement dates would be made for releases.
Monkey Wrench:
Our much loved dark strong ale won't be changed, but a spin off version, even stronger, more brutal than the original (at about 8%) would be brewed called 'Double Monkey Wrench Imperial Brown Ale' would be brewed. Same formulation but intensified.
Other beers:
An Imperial Stout, a Saison for summer and an annual Daleside Vintage reserve ale (at about 9% brewed to a slightly different recipe each year) would also be brewed. An Imperial Pilsner and Dunkel Weazen Bock would be added to the bottled beer portfolio.
Other Stuff:

All bottled beers about 5% abv would be bottled in 330ml bottles (not 500ml) and our dark brown bitter 'Old Leg Over' would be re-named 'Arrogant Dalesman Ale', Old Lubrication would be changed for a 7.4% Chinook, Simco and Centennial hopped to 75IBU India Pale ale called 'Hop Monster 5000' (with a follow on one off  'Hop Monster 10000' being a 9.3% 120IBU double IPA. I would still brew once or twice a week and when I did I would brew to some brutal music like Black Dahlia Murder or classic Slayer. However, much of my time would have to be spent in a leather coated swivel chair in the office wearing shades and a green and crimson red suit (possibly smoking cigars). This I would wear to some of the companies new prestigious events that I would organise. A beer and cheese evening, beer and chocolate night and a huge beer dinner where I would invite the likes of Garrett Oliver, Randy Mosher, Melissa Cole, The Beer Wench, Mark Dredge, Woolpacker Dave, Adrian Tierney-Jones, Brew Dogs Martin & James, Zak Avery and my mate Ed to the event celebrating our 25th year anniversary (or something like that) with the Daleside crew.
Other than that, wouldn't change a thing...
Posted by Rob at 18:30 10 comments:

The End Of History

An immense 50% alcohol achieved through freeze distillation. masses of hops, eccentric ingredients and a bizarre bottle. You guessed it, the Brew Dog Boys are back. An this time Martin has a new hair cut. Brutal. Mind you as much as I would love to try it, I don't have a spare £500 (cost per bottle) to pay for it. The question is, which beer blogger is dedicated enough to get hold of one first? My moneys on Dredgie but you can never tell.


The End of History from BrewDog on Vimeo.


Gripping stuff. And indeed I have on many occasions suggested at work we make some videos dressed as furry animals but the idea was turned down...

Is it just me or is this whole freeze distilled extreme beer thing getting a bit repetitive?
Posted by Rob at 12:17 2 comments:

Originally I wanted to call this beer something like Hop Monster IPA, Alpha Attack or something cool like that and amp it up to say 60 or so IBU but the powers that be wouldn't allow it. None the less being let loose to make your own commercial beer on a 20 barrel brew plant is definitely a privilege. Even if these 10 barrels of IPA will be sold only and exclusively to the Weatherspoons Spoons beer festival in Leeds running from the 20th to 29th of August. As the second beer I have designed for Daleside, the difference this time was I wasn't watching someone else do most of the work (as with Autumn Leaves) as my brewing training is now long complete. So the day began with a steady mash in. The 65.3oC mash was followed by sparging to collect 12 barrels of IPA wort, rich golden, bulked out with Munich and caramel malts. The hops were weighed out carefully. As usual a nosefuly was taken from each... Summit, Amarillo, Centennial (you can guess the last two)... Feeling them, rubbing and sniffing, I just couldn't wait to get these into that rich aromatic wort with its heady rich, juicy, bready aromas.

Much thought went into the recipe, and knowing that the likes of Leigh and Zak Avery may even be trying it (both Leeds bloggers) means more pressure. Then we have the Leeds Weatherspoons Managerial team who popped down for the day (a great bunch a lads), who had some photos taken and some complementary beers and pies. My hope was to maybe get them scooping the masses of hops out of the copper at the end of the day or doing some tedious labour, but it didn't happen. But since the brew size was small for our capacity not a huge amount of hops or malts were actually needed. 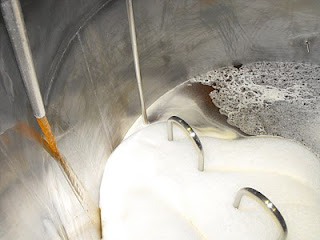 Transfer to the fermentation vessel

At the end of the day our extracts were sufficient to achive our 5.8% abv target, and we also got some photos taken for the Weatherspoons magazine. Apparently all the Weatherspoons folks are coming back early next month for and IPA tasting. I'm planning possible escape routs from the building now so if it does not go well I can avoid all conflict. But at least that means if I can't make it for the festival I can try it cask conditioned.

I have never staged an event talking to an audience about beer (or anything else) before, so big nerves for this one. I stuck with my football analogy that my selection of chosen beers and cheeses were my squad of 12 (not 11), with myself being the manager. This is because the outcome of the event would depend ultimately on how well they worked together. I know how good they are, they knew how good they were, it's time for them to prove how good they are. Enough of that Carlsberg ad rubbish, Here was the lineup and how they went down with the crowd:

Both soft textured, subtle and fluffy, a real crowd pleaser that went down well.

The fruity yeasty, hoppy character of this Belgian Golden session beer attempt to harmonise with the strong fruity, salty flavours of this mould ripened Northeast cheese. Again not bad considering this one was thought up last minute and next time I would probably consider replacing the beer with a Belgian Triple or similar.

Waves of citrus, tropical fruit like hop flavours cutting across the rich Scottish blue cheese. In brief, it works, but if aggressively hopped beers are not thing it won't go down well. So a mixed response here.

A pairing of real power and intensity that actually received a very positive response.


So a great night was had and at times I wished I wasn't standing up talking through it all so I could sit back and take in the awesome pairings. All the samples were brought out on time, and many questions were asked (admittedly I struggled with the cheese questions, I tried to revise as much as I could about cheese, but I'm no expert). The only real flaw of event came early on, it was a big flaw that ultimately meant the event ran at a loss. Proceedings went a little like this...

19:00: Arrive in the pouring rain, restaurant looks quiet, lets go an chat to the staff, get things sorted. Every ones ready for the sum total of 10 people who agreed to be here to turn up shortly.

19:15: Still quiet, getting beers out the fridge now to be served at the right temperature. Cheeses are lined up, Beers are lined up in order, bar staff educated ready to go.

19:22: Only 8 minutes to go but still no ones arrived! Whats going on has the rain put them off (in combination with the fact that only 2 tickets were pre paid for).

19:29: Still no one here yet. I sit next to my home brewed 4.5 gallon pin of golden ale brewed especially to be served complementary for the event (what a waste of beer, maybe I'll draw off another pint).


So myself and my capacity crowd of 3 people enjoyed a lovely evening of beer and cheese. I got to chat to the audience more than expected and the whole thing had a very personal feel. Do I class my efforts as successful or a complete failure? Going by numbers (only 5 of 30 tickets were sold) it was a failure. But like the feedback says, 'who wants to go to an £18 event in and area that's not that easy to find on a Wednesday night' maybe the tactical approach was a bit wrong. Anyway, it was memorable none the less.
Posted by Rob at 12:58 4 comments:

Too much going on.

First was my birthday, now here comes the climax to the Beer and Cheese evening and my first ever unsupervised brew of my self designed IPA for Weatherspoons (as discussed in my last post), the world cup finals, a crazed gunman on the loose in the local area. An amongst all this I'm trying to move house (hence the lack of posting recently). Apart from being exited about it all I also look forward to getting it over with as I have one last quality present which I can only have after moving house. I get to spend the sum of £100 on beer ordered from the Internet, which means I can get hold of a lot of long sought after beers from places like Italy and Holland that till now I have only dreamed of whilst reading about what the other bloggers made of them. Does anyone have any advice on where to buy rare or exceptional beers on the Internet? Up to now I am only familiar with Beers of Europe, which are often out of stock on some of the ones I really want. Some other retailers only sell in cases not individual bottles. Fellow beer nerds, feel free to help me out.
Posted by Rob at 12:37 3 comments: 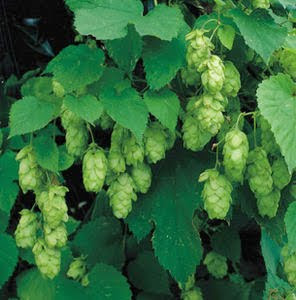 Summit hops
Yes that's right, I'm designing another beer for work.  A single batch of only 10 barrels of US style IPA will be brewed at Daleside brewery this month for the sole purpose of being served at the Wetherspoons beer festival in Leeds (named the Spoons beer festival) which takes place during the last full week of august. Apparently some Weatherspoons officials are coming in to get photos taken of them pitching yeast, throwing hops in the copper and so forth. I myself am hoping to get them scooping out the brutal quantities of spent hops left in the copper.
The thing that excites me about this project is that firstly this is my second ever commercial brew on the Daleside kit. Brewing your own on a full scale 20 barrel brew kit is always exciting, lots of the effort of homebrewing is taken out and more people get to try your product. The 5.8% IPA will be Daleside brewery's first American style IPA combining 5 different hop varieties giving a higher EBU (European bitterness units) than any other Daleside beer ever produced (hardcore). Alright maybe not hardcore, lovers of extreme hop bombs would probably call it softcore. Should be interesting none the less.
Posted by Rob at 19:14 5 comments: