The Northumberland Beer Festival is becoming an annual highlight of mine. Based in Longframlington memorial hall, this year it pulled the same cards as previous years plus more including pies, nuts and fairly well-chosen range of local beers. This time we weren't with the kids either. 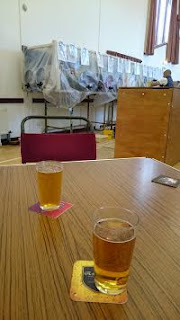 Last year the strong mild Endangered Species carried the flag for Mordue Brewery and the Panda Frog Project. This year its mirror opposite, contemporary golden ale Allelic Drift took its place. Bringing mango and pine the 5% pale golden Allelic Drift is hopped with Simco, Citra and Chinook and, from what I hear, it sold out. This year the theme seemed more about the blonde ale/pale ale and to start things off we had Solstice and Summer from the much respected Five Town brewery. Acton Ales Triple pale and Two by Two Monkey Puzzle IPA were both very good.

Also from Acton, American Dark Knight. Sweetish caramel malt front with dark berry fruit and hints of roast grain, very smooth. I also got to finally try the highly rated Allendale Sauvin Saison. A complex 6% apostle of tart gooseberry meets earthy farmhouse yeast. A rustic sophisticated affair. Also from the more abstract side was The Dogs Nuts from Dog and Rabbit brewery. An oak aged smoked bourbon porter that to me was a bit harsh and oaky to really enjoy although some people seemed to like it. So that was it for another year of great beer and great company.
.