What is your favourite beer?

As a beer enthusiast I have been asked the question many times. What is my favourite beer? I always gauge that the person asking me the question think that I rate beer on a fixed set of parameters. This would be true if it was a different question like what are your favourite brand of crisps? The obvious answer is Kettle chips. The same with Sainsbury’s own tomato ketchup, in my opinion the best one going. Leeks are the best vegetable, but asparagus and mushrooms are close contenders. Samsung do better phones than Apple, Branston make better baked beans than Heinz but Shortbread are the finest form of biscuits without question.

Then again with beer a similar deduction process to select one all superior brew isn’t possible. It maybe could be if I only ever drank a narrow range of beers like say cask blonde ales or mega brand lagers but no. By this point in Rob’s Beer Quest I have turned more to rating a beer experience as a moment or experience as much as it is a beer.

Take for example the first time I tried Rochefort 10. For Rochefort 10 to be my favourite beer I have to compare it to other inspirational moments like discovering Pliny the Elder. But Rochefort and Pliny can’t really be compared. That’s like steak vs pizza, both are very different. What I also notice about these occasional perfect beer moments is that they are rarely the same second time round. Sometimes the beer has changed or you are just in a different moment but other times a beer can be better on second tasting. But inevitably the answer to the question ends with a no, there is no favourite beer or greatest beer in the world. Often I may attempt to brew the greatest beer in the world at work but I know it won’t be, it would just be a tribute. Like the greatest song in the world, a matter of opinion.
Posted by Rob at 18:10 7 comments: 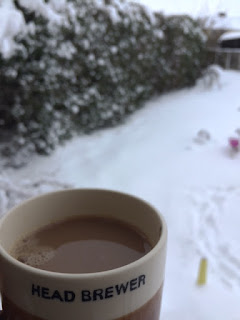 As many of you are probably aware, it’s been snowing a lot lately. With Northumberland being one of the worse hit areas this means no work for me. Lots of work for the journalist other half and lots of time with the children. With it being March now it’s like spring is having some problems loading.


My final journey back from work on Tuesday afternoon seemed to follow a clear gradient from the moderately snowy Wallsend to the grim, dark, desolate isolation of Siberian themed Alnwick. Our friends the yeast don’t like it too cold I explained to the bairns, it slows them down. Luckily the blokes at work have been re-heating those fermenters. But no work means no free beer, and supplies are getting short on that front. 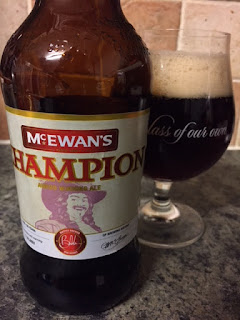 I bring you the co-ops finest. McEwan’s Champion is another one of those supermarket strong beers that no one noticed it was 7.3% before pricing it. It’s decent stuff, all fruit cake and burnt caramel. After this I got to the end of the Flavourly box. 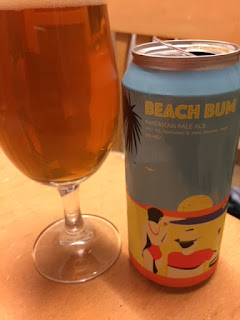 Beatnikz Republic Beach Bumpstead is a US, NZ and Australian hopped pale ale that's tastes of pure nectar from the gods compared to some heavily filtered/pasteurised supermarket equivalents. Tropical zesty but clean. According to the can meant to be drank in the sun or reminiscing about drinking in the sun. Sadly will have to settle for the latter.
Posted by Rob at 21:17 3 comments:

Alas it is 2018. 2017 is over, Last year was a mainly neutral sort of year that went very fast. There was operation Serpent Shadow  (winning Newcastle beer festival Battle of the beers again) and some nice holidays.

The main agenda at Mordue Brewery this year is Beeronomy, the ultimate Mordue and Panda Frog beer and food experience. But plenty of other stuff is on the horizon, not to mention getting a new canning line. The coming spring obviously means SIBA events and all their grandeur. Then there’s Newcastle beer festival and Battle Of The Beers 7. Obviously if I were (although statistically unlikely) to win this year it would make Mordue the only brewery to ever achieve a three year hat-trick of wins at the event. Not just a chance of winning, a chance of immortality. But who knows, I’m just a man and his will to survive. 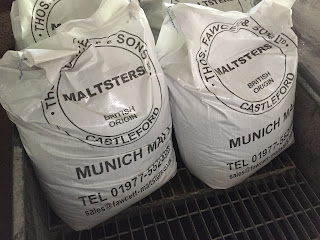 Finally Killswitch 51 is back from a long break of missing 2017,  and a new Panda Frog E=PF2 (or squared) an Ekuanot - El Dorado hopped wheat beer is on the way. The new ‘Mash Sessions’ set of seasonals will bring back past Battle of The Beers winners Code Red 40 and 5PA along with some new beers. In all possibility 2018 could be a bumpy ride.

Hopefully I can maintain enough effort to keep blogging. These days life isn’t as compatible with beer blogging as it was back in the day. Then again the beer blogging scene isn’t what it was either. Back then you weren’t just a beer blogger, you were part of the REVOLUTION! And every delve into the blogging world was like going to the theatre. Where Beer vs Wine and beer duty were considered serious debates that could easily escalate into a punch up. New beer or beer an food pairing discoveries were embraced with awe like newly discovered species of butterfly. So many diverse views and characters but at the end of the day everyone just wanted to enjoy good/preferred beer in good company... That and all fall on Alistair Darling and give him a good drubbing, like a proper good drubbing.

So I’m obviously hoping for some kind of beer and cheese like event some point this year (already in the pre planning stage). Going to France again to get more way underpriced Rochefort 8 and brewing a sour beer. An interesting sort of line up.
Posted by Rob at 16:40 2 comments: