There is beer in the house 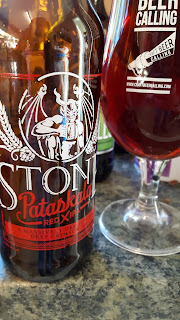 One of the most comforting thoughts of them all, the knowledge that beer is in the house. Although the majority of the time, some beer is in the house. Normally it's from a tank or cask at work or found locally, the expanding range of the local Aldi (aka Wonderland, where every man's a rich man) for example.

On this occasion we have none of the sort. Stone Pataskala Red X IPA is a relatively new release from San Diego based Stone brewery yet to be released on the UK market (my aunty Wendy from California is to thank for this). It's a big red 7.3% Red IPA brewed with Mosaic, Cascade and Amarillo hops and the German malt variety BESTMALZ. A unique take on the Red IPA as it says on the bottle and seems reminiscent of so many other Stone beers. The flavours are smoothed out yet big and burly with a perfumed pine aroma from aggressive dry hopping that doesn't compromise approachability (as with many Stone beers). Sweet red fruit, grapefruit like citric notes mix with boozy toffee and thick malt. A big mouth feel contrasted by hop pine. All in all certainly worth a try if you can get hold of it.
Posted by Rob at 20:34 3 comments: