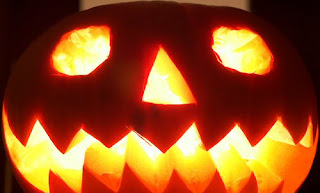 I used to like Halloween. During my University years Halloween was a time for watching the scariest movies or listening to black metal with the lights out (or just dimmed a bit). It rocked, but these days I’m not that bothered. My perceptions have changed and today I find the event to be straight gimmicky, commercialised and just damn right annoying especially when your harassed several times a night at the front door by kids asking for sweets. Anyway, my question of this blog post is what are the best beers suited for Halloween? Secondly, how do you define one? The obvious Pumpkin beers seem to be the thing in the US but over here I rarely see them. A few beer writers have attached Porter style beer to Halloween which seems to fit, dark and mysterious is the way to go. Then you have those offerings that are just bizarre, Brew Dog Dogma for example. Something that completely throws your expectations by being nothing like what you anticipated. 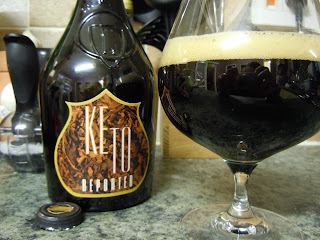 And to me an Italian tobacco infused Porter sounded quite crazy, that’s why I decided to crack open my Del Borgo Keto Reporter the other day. I have to say that it wasn’t as bizarre as expected but an exceptional beer none the less. The tobacco flavour is quite subtle, and gradually develops as you drank. Lots of chocolate and roast malt notes encountered here and overall a medium bodied well crafted porter.

Porter seems to be a theme of this week, especially since I have been brewing some for the first time for work and it’s not often Daleside porter is brewed.  The man behind the formulation is a bloke called Dann Paquette, now owner of the Pretty Things beer and Ale Project in the States. His beers for our brewery have been some of Daleside’s best offerings and Porter is no exception. 4.4% heavy bodied with dark fruit and chocolate notes. In fact when I first tried this beer I thought it to be very similar to another beer I favour, Acorn Old Moor Porter. The two are similar and probably two of the best Porters in Yorkshire. 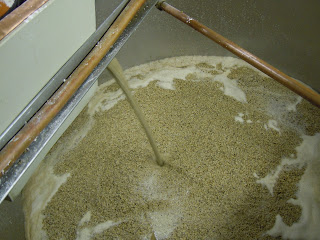 Mashing in: It soon thickened up. 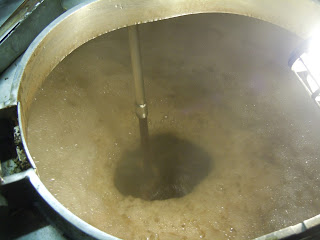 In copper bringing it to the boil. 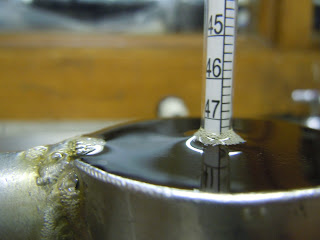 Copper up gravity (a bit high)
Anyway I will probably find out next week if I done Dann’s beer any justice. The brewing went well, gravities were on the high side but apart from that all was fine. Until then I shall be fending off trick or treaters and contemplating re-home brewing my Christmas special ale as it seems the first lot is running out already (brewing it in August was not the best idea). I should also maybe get looking for those old black metal albums.
Posted by Rob at 09:45 3 comments: 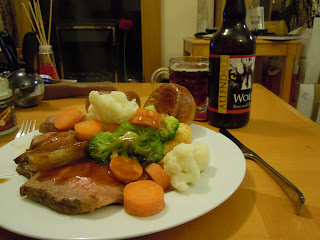 OK last weekend wasn't the most exciting of weekends but this was definitely the highlight. Allendale Wolf with a roast beef dinner. My wife does an awesome roast beef and this joint was obtained from our local butchers, the famous (in Alnwick) Turnbulls. Wolf is basically Allendale's powerhouse 5.5% strong/brown ale and you read my ramblings on it and some other Allendale beers here. A long time back I did a bit of voluntary work for Allendale so I know them quite well. But anyway the pairing itself works brilliantly with the whole full bodied caramelly/roasty notes latching into the caramelisation of the meat. Definitely recommended.

More recent news is that I have finally got Operation Elizabeth up and running. The only technical flaw was the absence of the White Labs Dry English Ale yeast. So I used the Daleside house strain instead and knowing the fermentation might struggle I over quadrupled my pitching rate and aerated well. Because of this our friends the yeast were off like I bomb and the 1091 OG has dropped below 1030 inside of just 3 days. I just hope I don't get any diacetyl or off flavours produced from too much yeast matter hanging around. The good news is the fermentation temperature hasn't gone out of control and it seems to be slowing up now. I plan to let it steadily ferment out to it's target gravity before I cool and skim it. More on this later.
Posted by Rob at 17:20 No comments:

A belated Oktoberfest at home. 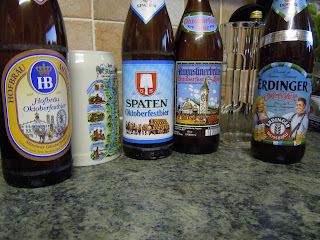 This journalism work isn’t half tough some times. I had to review all these beers for my monthly column in the Northumberland Gazette’s supplement Northumberland Now. I thought since it’s October and all I would make a theme of it (even tho the actual Oktoberfest has been and gone) and maybe even get in some pretzels and chicken. But not so.


Tto tell the truth I have never really remembered trying any Oktoberfest/ Märzen style beers in the past so this made it more interesting. One of them (the Erdinger) was actually a Wheat beer, and I’m not sure why. The other three Märzens were nice strong golden malt driven lagers, but I hear the style used to be traditionally darker. But in the words of Dredgy’s more recent postings, beer styles are like ‘moving targets’ that change and evolve constantly. In that knowledge I can conclude that this tasting session has taught me little about Märzen. The highlight of the pack however was defiantly the HB which was bold and malt driven with a firm herbal hop bitterness and featured just a hint of caramelised malt. The Erdinger was also very flavourful but for me the HB would be the only one I would hunt out again.
Posted by Rob at 17:42 9 comments:

I just realised after all that time supping all those cocktails through straws in Cuba that straws themselves were invented themselves via historical brewing. Check it out here.
Posted by Rob at 12:06 No comments: 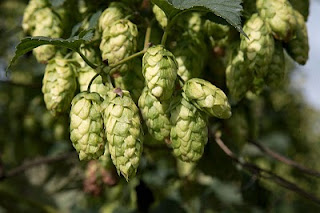 OK this post is a bit late coming, but is actually linked to what I did in this post. A US Amber ale experiment using the New Zealand Motueka hop. In reference to that previous post, I must mention that this particular review of my Amber ale (that I have just been drinking for quality control purposes) was actually a re-brew of the original, this time with a slightly more simplified grist and using only Motueka hops (instead of in combination with Chinook and Centennial). Here it is.

I was pleased this came out better than the original. Mid bronze to amber in colour with a nose of tropical fruit and spice (a touch Saaz like). Medium bodied with a touch of caramel and a dry finish with lingering spicy hops. A good beer and a touch drier than intended due to the slight over attenuation (original target was 1011). But overall I have decided I like Motueka hops. Flavour and aroma properties are a touch like Saaz, a touch like Cascade, and a touch like nothing else I know. They would probably blend well with a lot of US or German varieties and apparently are good in many lager beers.

In my hop store I also have some Pacific Gem and Nelson Sauvin, so I shall be looking forward to brewing up some hardcore beers with them in the not so distant future.
Posted by Rob at 20:15 22 comments: 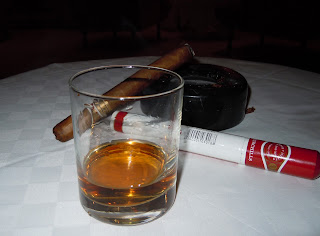 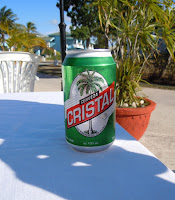 I have to say, it's good to be back. Back to real beer, cheese and that lovely, welcoming cool English weather. The last two weeks have been mostly spent chilling out, drinking Rum and cooking lager, smoking Cigars and going on trips out around the island. Don't get me wrong, unlike Hawaii, Cuba is a much more raw, unadulterated place. Lots of culture, sun, sand, old American cars and blokes trying to flog you fake Cigars, hand made items or sometimes drugs. But for me they get it wrong. Any back street hustler offering even a can of Bass or something, I would have taken up the offer. But despite my issues with the lack of decent beer on this island I have to say it's been a good holiday, and what I have gathered is that the Cubans are  actually very enthusiastic about beer. Or to be more accurate enthusiastic about cooking lager, which I have to admit in the baking heat does offer one refreshment. But the Cubans didn't complain about it, they always seemed happy. 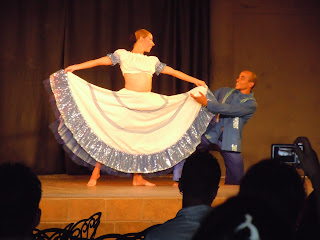 Professional Dancers take to the stage for an evenings entertainment at the hotel.
(You can prance around all you like, it ain't going to get me a proper pint)
Another thing that's good about being back is getting up in the morning and not have to cover ones self in factor 30 sun cream. Some sun burn was encountered, but so were a few brutal storms and spells of heavy rain. But luckily this didn't overlap with our trips snorkeling, swimming with dolphins, horse riding, visiting little villages and the likes, and at the end of the day it wasn't all hard work. 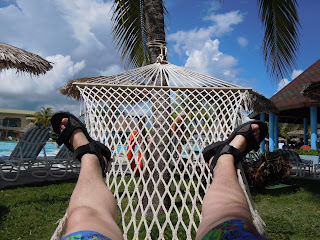 Swimming in the crystal clear Caribbean sea and enjoying neat Rum and Cigars in the Cigar Lounge were some other good moments. I still can't wait to try Cigars with Whisky. A nice Ardbeg maybe, but they go nicely with dark Rum like Havana Club Barrel Proof. 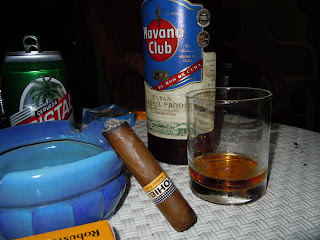 Thinking of barrels, next week I hope to get my Operation Elizabeth underway for a lengthy fermentation. All I need are the malts then everythings in place. Its gonna rock! Back at work now I have managed to get a try of the new Nightjar Brown Ale (single batch reserve for now) which head brewer Craig is concerned about it having too much bitterness, I think it has a nice edge to it, but I suspect it may be redeveloped if we decide to brew it again. Mind you my judgements might have been swayed by the fact that every beer Ive had since getting back has been like the most awesome experience. That's all for now.
Posted by Rob at 09:31 No comments: