That's right I am now officially in my late twenties. But it ain't so bad, after all 28 is the same age as Ryu was from the classic video game Super Street Fighter 2. Not that I now have the ability to shoot fireballs from the palms of my hands. But I thought it would be good to do something for my birthday and since I rarely get round to going out in Newcastle, and it has many good pubs, I thought that the night on the Toon was the way to go. 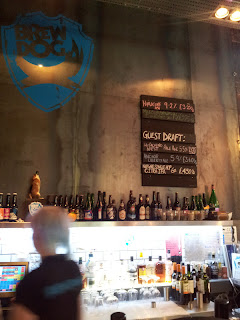 To start things off we ended up in the much tweeted about Brew Dog Newcastle. As my first time in a Brew Dog bar I found it to be more or less what I expected. Bright edgy fonts everywhere, uber trendy and not a single bar staff member looking over 16. If you're a Brew Dog fan you will love this place and I don't think I've ever seen a specialist beer bar try so hard with image. Besides this Stone Oaked Arrogant Bastard Ale proved to be an interesting twist on the original and Brew Dog Centennial Columbus IPA and Nogne Citra were both sound new world IPAs but for me seemed a bit overly chilled from the keg dispense.

Moving on it was time to hit the Broad Chare for burgers with some delicious Wylam Writer's Block which has enough attributes of an American pale ale to pull off that classic Pale ale/IPA-burger no brainer pairing. After this there was various options as the Toon is littered with great pubs, but with a heavily pregnant wife as our driver it was time to cut to the chase. 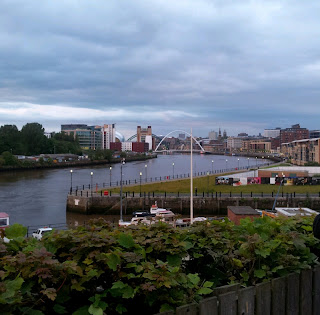 The Free Trade Inn is a classic geordie pub that I barely see enough of. It hosts a great range of beers and advocates new beer released around the region and further afield. So being in with what's current a Brew Star Anarchy was in order, along side a Mordue IPA for quality control purposes. 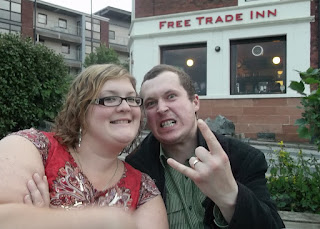 But after a not so long night it was time to head home. After all I am getting on being 28 and all. But the party wasn't completely over as birthday celebrations officially ended today (on my official birthday) with a beer dinner made by the wife. 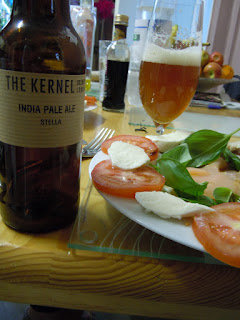 To start things off smoked salmon, tomato, mozzarella and basil salad served with The Kernel India Pale Ale Stella. A beer chosen almost randomly that stangely seemed to work with the dish. The beer was mainly chosen because I have never tried any IPAs from The Kernel and because I'm unfamiliar with the hop variety Stella. It's a big naturally conditioned beer packed full of big resiny hops backed up by burly malt. The Stella hop seems moderately interesting, a tad like galaxy, a tad like centennial, a tad like various others but with a slight earthy, robust almost peppery character. A great beer. 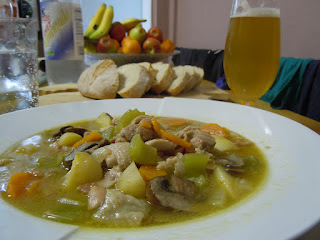 Stepping down a notch with the hops it was time for some Mordue Nothumbrian Blonde (straight from the conditioning tank at work) served with a chicken stew derived from the cookbook Appetite for Ale by Fiona Beckett. Sierra Nevada Chicken was basically adapted to being Northumbrian Blonde chicken. Great stuff and very filling. But that just about sums up my twenty eighth birthday experience, my last birthday not being a dad.
﻿
Posted by Rob at 22:08 33 comments:

At last... The bottling. 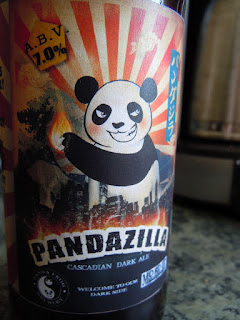 One of the problems with bottle conditioning your own beers on site is time. You need to find the time, space and manpower to get through it. It's been a long time coming but this week the folks of Mordue Brewery have finally managed to get our limited edition Panda Frog Pandazilla beer bottled. 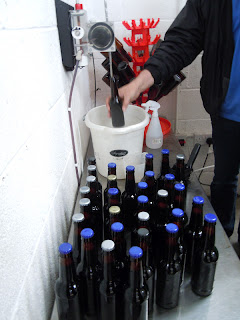 So after labelling up all three hundred plus bottles (like I say, limited edition) all there is left to do is hope my carefully calculated additions of priming sugar and yeast provide the bottled beer with just the right amount of condition. We did have the idea of encasing the bottles in dead rodents carcasses and selling them for £300 each but no, it has to have the classic Pandazilla label at the fore.

Of course, now Pandazilla is in bottled form it is free to be unleashed upon the world (or as far and wide as 300 bottles can go) and some select bloggers will receive some (the chosen ones). Additionally a few chosen pubs will also be harbouring the beast, not in bottled but key-kegged form. It will be interesting to see how it varies from the cask version. So there you have it, Pandazilla back for round 2 the sequel, you could call it 'Pandazilla 2, return of the black stuff'.

Here's a newly released beer I came across recently at my local the 3 Wise Monkeys and decided to take one home. I already knew Brew Star for their beers of a well-refined, composed and balanced nature and this offering really takes that to the next level. 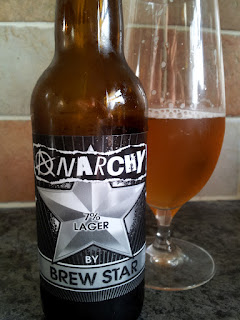 The very name Anarchy suggests nothing of what the beer is really like. The beer itself is an approachable yet sophisticated affair. A strong lager that's pale golden in colour, 7% abv, 20EBU and with upfront peachy fruit and hints of leafy noble hops in the aroma. The palate sings immediately with bold, smooth malt and with a well integrated tang of fruit. The finish is clean and the whole experience hides the 7% abv well, which does urge for a note of caution considering this beer's immense drinkability.

So the hat comes off to Brew Star, who when wanting to bring their first big beer to market decided to go against the currently traditional approach of 'let's throw a ton of hops at this and be like POW! Yeah! Awesome!' and instead decided to showcase professional brewing with something crafted as intricately and finely-tuned as a German sports car. I can see a lot of beer geeks loving it but more importantly I can see a lot people taking a step back to say "wow, did I really say I didn't like beer?".
Posted by Rob at 18:57 5 comments: 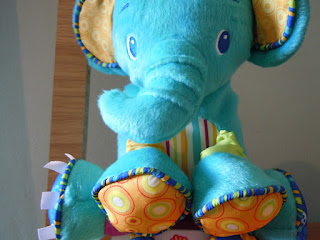 Yes, thats approximately how long it is till I officially become a Dad. I can't say I'm not scared, it sure is daunting.

In preparation I've studied and questioned the activities of some other parents I know. I've watched them manage their bairns on a daily basis and I reckon I have it sussed. My concluding thoughts were that managing kids through a day is kind of like managing a fermentation, but a bit more intensive. The blighters will rise in the morning, then once log stage fermentation kicks in they're off. Without control the yeast/kids will inevitably do whatever they want, which is fine until they misbehave, which is why you need to keep checking on them. I know kids dont give off CO2 or alcohol but give them more sugar and they become more lively but eventually they tire themselves out.

But it doesn't stop there. You could argue that managing a family is as tough as managing an entire brewery, but we'll not go into that. There's been lots of debate and preparations. Names, spare rooms, nurseries. Yet the very important matter of what to brew for the birth of the first born is not completely sorted.

At first I thought something low abv and fresh, like a golden ale, Belgian Wit or a mild ale would be fitting to symbolise youth and vitality. This would also be handy to have on draught in the house whilst on my two week paternity leave (baby in one arm pint in the other). My other obvious option was to go the complete opposite and brew some kind of insanely strong Barley wine or Imperial Stout to be kept over the years to commemorate the event. You never know, in 18 years time little Sauron might get to drink it him/herself.

In an ideal world I would like to brew both of these, but considering these days my opportunities at home brewing are few and far between I'm settling on a single brew. My current plan is to aim right down the middle with a 6-7% strong ale using two of my favourite hop varieties, Progress and Cascade and plenty of chunky crystal malt in the mix. The beer will be named after the baby, but that's still undecided (it's not going to be Sauron but it should be good), .
Posted by Rob at 17:22 8 comments: