I often say to visiting Brewlab students that Workie is the most old school beer we do. Some would call it a brown ale, others a Scotch ale cross best bitter ('style hybrid' dare I say?).
Workie Ticket is a classic ale of the North East region that's been around since way back into my school days. Chocolatey almond goodness meets rugged grain and underpinning hop bitterness in the finish. It's northern beer with character that almost echos decades of Geordie history. 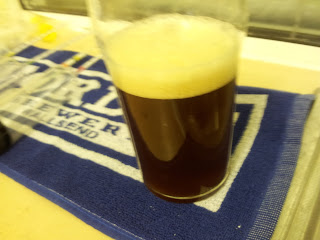 Workie Ticket is  retro. It's the notes you've heard before yet not quite in that order. It's like Oasis 'Wonderwall' suddenly sparking up on the radio. This beer sits alongside its cousin IPAs, blonde ales Panda Frogs and others and is yet still at heart and soul of Mordue Brewery.

Workie Ticket is a lovely beer and I am a proud successor to its architect.

In addition to this I am even more proud to have been representing this arguably iconic North East beer at the Great British Beer Festival in London this week. With the Mordue team we represented our region, our brewery and our Workie Ticket.

Return of the Killswitch

Many will remember Killswitch 51 as Mordue's entry to last year's battle of the beers at Newcastle beer festival. This year we're bringing it back. Well I say bringing it back, as it's not quite the same beer. Let me explain. 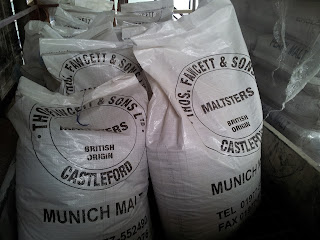 It's always a difficult decision to make when dealt sub-standard hops. Never had I seen Galaxy hops so brown. Do you use them anyway or substitute completely? So in short Killswitch 51 (2012 version) became a sort of kit car beer, where a lot was made up as we went along. Though in the end we were happy with the outcome.

This year however we had the hops to make this beer the way it was originally intended. The original article you may say. Deepish amber with Melon and liquorice, smooth pine and backing of cinder toffee mellowing things out. Still Munich malt based although more complex and floral I would say. Strangely enough both brew days yielded the same exact 1051 original gravity. Killswitch 51 is available in cask and (very shortly) in keg form and for those who didn't guess the origin of the name first time round, then this link reveals all. I will be trying to hunt this out for sure.
Posted by Rob at 20:57 No comments: