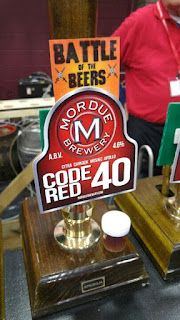 'Energy cannot be created or destroyed, it can only be changed from one form to another'
Albert Einstein


Newcastle Beer Festival trade session day is always a highlight of the year. In a sense like Christmas day but without the presents. A time to catch up with everybody that's anybody from the local beer scene and try various beers from the always impressive beer range. This year it was 40th ever festival and their was a special announcement from Hugh Price on the history of the festival. The venue may have changed, the faces have changed but the spirit remains the same was the jist of it. Many North East brewers and beers were in attendance. From old timers like Hexhamshire and Big Lamp to Northern Alchemy at the cutting edge of new world craft. After Hugh's talk was the announcement of the Battle of the Beers winners and that unforgettable almost agonising 10-15 second period between announcing runner-up and winner.

Code Red 40 is a name modified originally from the Napalm Death Album/song 'The Code is Red, long live the code' was our Battle of the Beers entry and winner. It is brewed with four hop varieties in fitting with this years rules of the competition  (4 hop varieties, between 3-6% abv and named after the number 40 or year 1976). Chinook, Apollo, Citra and Mosaic were the hops used and the malt profile was made rich and heavy with a deep red colour from the use of six different malts and oats compacted to a modest 4.6%.

Yet the story behind the beer goes back much further than just the last 3 or so weeks its been in production. Code Red 40 is the end point of a 12 month conquest for redemption which manifested into the campagne code named 'Operation Crimson Pheonix Thunder'. 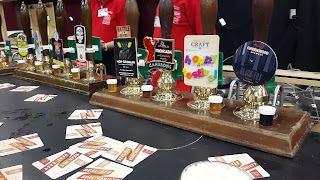 In November 2014 a huge (speculative) brew plan was drawn up covering spring 2015. It intention was to guide the ideal conditions for SIBA and battle of the beers victories (concerning new yeast propagation etc). Taking the triple on Mordue's 20th year, the ultimate prize 'Get me in there, get me in that zone' it whispers in my head. Sadly the paternity leave says no. I never really gave the deserved accolade to Matt for running the bulk of 'Operation Gold Serpent Seige' with integrity, precision and discipline, yet like anything, playing well doesn't guarantee anything.

Another time another place a new competition with new rules. The last 3 weeks I revelled 'being back in the zone'. 2016 and brewing forces from the region were amassing in greater numbers than before for the opportunity for recognition in the fifth installment of 'Battle of the Beers' saga. It was time to be bold, this time I wouldn't be taking no prisoners.

Code Red 40 I have often compared to the the antagonist dinosaur from the film Jurassic World the Indominus Rex. It's build upon the DNA of various other beers in the Mordue park. Part Killswitch part Apollo 40 part Maximo No 5, a hint of Pandademic and others, but with (as they say in the film) 'more teeth'. Fortified juicy malt under forest fruit and citrus hop assault this beer was built to ruthlessly decimate the opposition laying waste to entrant after entrant. From the carnage only Big Lamp and Credence brewing were able to hold ground but would eventually fall (into joint second place respectably). I knew a beer with pedigree would at least score well but was apprehensive about our entrant drinking more like a plus 5% beer and thus compromising its drinkability factor.


So all ends well at this year's Newcastle beer festival. I got to catch up with various folk and try quite a few beers. Next year I obviously wont be returning to Battle of the Beers with a vengeance, so might just tone things down a bit. A malty hoppy ale, with a malty hoppy finish, classic tasting notes.