It's been a long time coming. It almost seems like it's been decades but it's only been months since Mordue Brewery's Panda Frog project hit the drawing board. Those that remember last November's twissup in the Toon may remember trying free samples of the Pandazilla trial batch. But now the time is finally closing in to get the stuff officially re-brewed on the Mordue kit and finally unleash the mighty 7% (thay's right, we're keeping it 7%) Pandazilla cascadian dark ale to world. 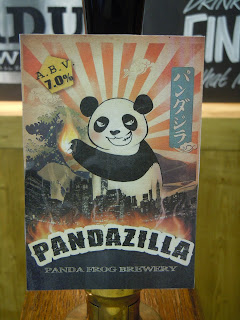 Well I can't get too excited yet. At the moment Mordue's elusive Panda Frog project consists of four, ten barrel brews which at this moment exist mostly only on paper. Each will be released more or less in line with a season (the first being spring). Many things such as artwork and future official release dates are pending. But I can tell you Pandazilla will be released to the wider public for the first time on Wednesday 18th April at the Newcastle Beer Festival at Northumbria University.

I won't be giving you any more information, but from now I will be opening a new page on the blog titled Panda Frog. This temporarily compensates for the Panda Frog project not yet having an official web page. That's all for now.
Posted by Rob at 18:49 118 comments:

You could say what got me started thinking about this was when at work Mordue brewery's Kerry (our friendly face in the office) happened to be in the cold room when I gave her a sample of a new batch of beer from a cask. "Very bitter", she said, "citric and bitter". Interestingly later in the day I gave her another sample of beer in which the response was more like "toffee-caramel and winter fruits, not all that bitter".

The first beer mentioned in this story, was Winter Tyne. The second beer was also Winter Tyne. The trick was basically to place the cold unconditioned sample on top of the hot liquor tank (which is hot) for a few moments then bingo, you have a majorly different tasting experience. The fact that temperature affects one's perception of beer is no secret, and sadly I have yet to try Winter Tyne in all its glory from a hand pull.

To go into it in depth you could say that your impression of a beer is affected by psychological factors such as mood and environment as well as factors affecting the beer itself such as serving temperature and carbonation. Marketing also plays a big part (and this applies to niche products as well as mass market brands). Here's another question.

Would you rate a Rochefort 10 higher in this glass sat outside a Belgian cafe on a summer afternoon...

Or from a straight cobalt blue glass served in an enclosed odour free booth indoors? To be honest, in the second scenario I probably wouldn't even guess I was drinking Rochefort 10 (unless I already knew about it). As I have picked up on these things over time it has made me think more and more about the book. 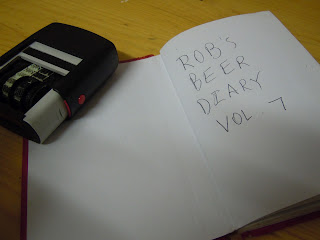 Many readers may be familiar with the book, as it has been going now for nearly six and a half years and is on its seventh volume. It is a form of ticker's notebook that contains dates and tasting notes of almost every new beer I have tried since 2005. It's been with me to pubs and bars across counties and continents, from holiday cottages to honeymoons to roadside pubs for lunch on long car journeys. The book has been around a while now.
Yet when I first started the book, it was meant to portray accurate tasting notes of as many different beers as possible and at the time psychological factors or any of the above were overlooked. And looking back over notes now is more interesting especially when you see accidental repeats of the same beer that actually read quite different reviews. Now could this be due to physiological factors? Batch to batch variation at the brewery? Maybe the first was fresher? Or could the review be tainted by the fact I'd just sunk five pints before writing it?
I have some reviews that are totally illegible drunken scrawl where all you can make out are the last few words that say something like "was really good". Then there was that time I reviewed standing up in a crowded gents lavatory at a club whilst some bloke was throwing up nearby. Happy days.
More recently I've started to think more on the lines of; who cares? I don't think beer is ever meant to be taken that seriously. So from now on I look back at tasting notes more as memories of what I thought of that beer at that time and the words I chose to express it. I've also cut back on the old 300 plus word in depth essays on individual beers, I just keep it short.
So there you have the divide. The divide between tasting beer analytically (which is important for a brewer) and actually drinking and enjoying beer. Its the same divide that separates the beer geek from the beer drinker. But the question is, if you analyse what you drink too much does it actually hinder the enjoyment? My view is it depends entirely what beer and what environment you're drinking it in.
Posted by Rob at 17:40 3 comments:

Allendale is a brewery that has undergone a lot of product development recenty.  It was a long time back now when Allendale gave me my first valuable work experience in an actual brewery. For that week head man Tom Hick showed me some of the trials and tribulations of running a ten-barrel brewery in an old farm building with only two or three people. I even helped them paint their first pub (for a few hours anyway).

Since then Tom has won an entranpreneur award and had kids. They now have new brewers, new beers and a new website. 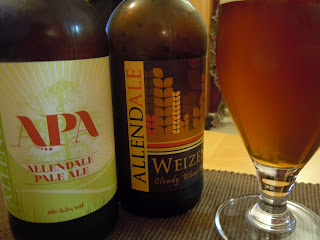 Anyhow, on to the beers..Allendale Weizen (5%) pours is a rich golden in colour with a slight haze. Corriander spice, orange peel and citric aromas dominate in a very textbook Belgian wheat beer sort of way. Palate wise you get banana, clove, caramelised grain and fluffy-grainy wheat all over a smooth slightly toasted malt mouthfeel that leads to more lingering banana, soft grain and a hint of apple right at the end. Some might think this to be a touch too malt forward for an authentic wheat beer, though I myself don't care. The beer basically drinks more like a German Weizen yet smells like a Belgian Wit. It has great composure and drinkabaility and I imagine this pairing nicely with a lot of different foods (Weizen's are normally uber food versatile).

Next up, Allendale Pale Ale is a 5.5% very pale golden take on a new world American pale ale. This beer speaks with plenty of hugely perfumed mango, papaya, tropical fruit and citric notes in the aroma (i'm guessing a dry hopping of citra hops?). The palate then gives more papaya, mango and tropical fruit over a light malt body and some very sappy (yet subtle) hop resins linger in the finish. A very sexy pale ale indeed, this isn't your typical Allendale beer but closer to something you would expect from the likes of Roosters or Magic Rock. Slick and clean on the fermentation and malt flavours with lots of resonating leafy citric hops. This would be great for the summer, so its a shame its a freezing cold febuary night.

All in all its good to see new stuff from Allendale, Tom, Rob's beer quest salutes you. And it just goes to show how the current North East brewing scene is evolving in the right direction. New brewers, new pubs (with bigger beer ranges) new beers, new beer styles, craft keg the list goes on. A world apart from back when I was a lad and most Geordies associated local beer with 'The Fed' or 'Newky Broon'. The likes of Durham and newcomers Tynebank are constantly pushing on the extreme ideas front. Wylam and Jarrow have been tuning up the hops lately, and newcomers like Ouseburn Valley and Scottish Borders bring their own brewing styles and beers to the table. Though as much as I big up the new kids on the block, I don't think Geordie beer would be Geordie beer without old timers like Mordue and Big Lamp.

Here at Mordue we are soon to release our first Panda Frog beer to the public as the Pandazilla cascadian dark ale brew date is getting closer and closer, it sure is gripping stuff. It sure will be interesting to see the public response.
Posted by Rob at 18:22 2 comments: 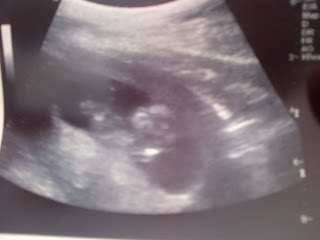 Well not till August anyway. That's right, a baby brewmaster. You see I'm getting on a bit now (28 this year) and those familiar with Star Wars or the SAW series will know that at some point in the story the archetype must pass the torch, so to speak, to new blood. And before you ask yes you can teach kids to brew I saw Zak Avery doing it on Twitter.

But the truth is I'm not entirely sure what to expect and a bit nervous. Ok well more than a bit (shitting myself) but whatever happens I'm sure little Sauron (a lovely name for a boy) will be a lovely addition to the family. Even if it does mean less opportunities to spend nights down the John Bull or the Tanners or even just to kick back with various bottled beers for the night whilst watching various classic movies such as Scum or Commando. But I'm sure when little Sauron (or Kurgan (Centennial if a girl)) gets old enough he or she too can endulge in these great cinematic masterpieces. It could be a tough ride, but surely I must survive.

Anyhow we have decided not to find out the sex of the unborn one so I thought It would be cool for a new poll (since I haven't done a poll in ages). This ones called guess the sex of baby Millichamp and basically has four simple answers because basically the baby can only be ether A; 'a boy' B; 'a girl' C; ' a hermaphrodite' or D; 'one of those chest buster things from the film Alien'
﻿
Place your bets now...﻿
Posted by Rob at 18:11 10 comments: