A new dawn for Panda Frog. Bullfrogs At Dawn 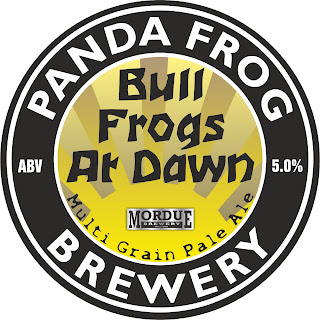 Alas the Panda Frog Saga continues at Mordue brewery. December seems a long time back now and to open the 2013 lineup we bring you Bullfrogs at Dawn, a 5% multi-grain spiced pale ale. Named after a North American amphibian, the beer, naturally, features North American hops Chinook and Amarillo over a slightly abstract grist of oats, rye and wheat. As for the spices, well I will only leave clues.

Lots of fun brewing this one and the resulting beer reminded me slightly of your typical crazy Italian craft offering. Bright yet smooth and oily with tangerine like citric hops leading to spicy rye notes in the finish. A multi-layered affair with a mouthfeel I'm very pleased with. I'm also happy to announce that Bullfrog's is heading to this year's Newcastle beer festival (last years Pandazilla passes down the torch). 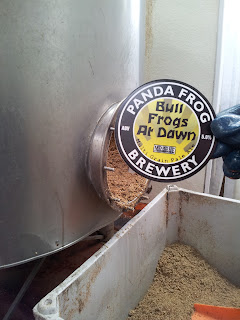 Bullfrogs at Dawn is available presently in cask only form. and throughout April we hope to get it bottled.
Posted by Rob at 16:14 5 comments: 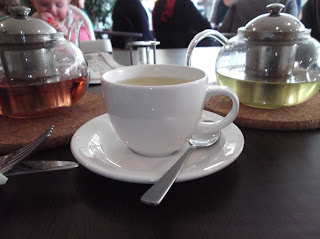 Tea is one of those fascinating beverages I manage to explore every now and then. Unlike wine or whisky (covered in Rogue post 1) it won't break the bank. Tea can be bold, like an estate black, or incredibly subtle and refreshing like a an Oolong or a green tea such as the Japanese Gyokuro (pictured above)  In the right mood tea is my favourite soft drink and a great place to discover it is Alnwick's very own Bari Tea. They do a good cheese platter and some nice cakes too.

A long time back, I mean way back, tea was thought of as a fierce rival to beer. People were given access to foreign goods and both competed for the place of national staple beverage of the nation. A place for everything I would say.
Posted by Rob at 21:35 1 comment:

Old Dairy Tsar Top and Over The Top

It seems a continuous feature of the modern brewing scene to be littered with the opinionated, the renegades, mavericks and those brewers with that personal fetish for certain styles and methods of brewing. Former microbiologist and Heriot Watt student Ed Wray of Kent-based Old Dairy brewery is no exception to this. Some may remember his beer being featured on the quest back in December. This time I'm covering Ed's more specialist offerings, both of these offerings being inoculated with a brettanomyces yeast culture dated from 1910 bottles of English stock ale.

For both of these beers the words 'old school' come to mind. Think not Hawkwind cover band but more seventeenth century Baroque. Lots of classy complexity and subtleties without many bold statements. First in comes the imperial stout Tzar Top at 10% pouring with immediately lively carbonation and a quickly fading head. Aromas are leathery and familiar with more leathery notes on the palate.  Sweet liquorish and deep cherry is countered by an almost lactic sour note. Late on this turns to dry tobacco and peppery hop bitterness that lingers in the finish. The mouth feel is slick, oily and brings everything together with an almost red wine sort of feel. As one of the more sophisticated Imperial stouts I've tried it takes a little time to get to know and would  pair nicely with a nice medium bodied cigar. 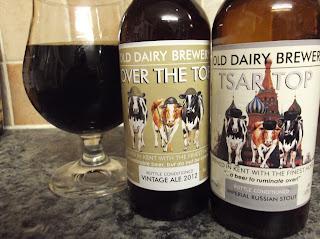 Next up, Over The Top vintage ale 2012 a peculiar little number at 10.5%. The first thing I thought when I saw the bottle was 'funky wild yeast, big abv vintage ale, this has cheeseboard written all over it', It's a worthy match for cheese, but without any sharp bitter or acidic elements to it to contrast, it struggled with the big cheddars a little. Again a big yet subtle beast but with a lot of slightly underdeveloped nuances about it. Deep bronze and dominated by an orange marmalade like character. Damp leather mingles with some sweet malt and there's an overall mustiness present.  My overall thoughts are that it needs more ageing but the overall flavours are nice. 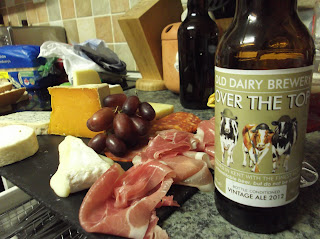