Since when did tea become the drink of Britain?

Following the conclusion to Oz and Clarks recent series of Drink of Britain, many people that I have spoken to have been much disappointed that apparently (according to Oz and Clark) the drink of Britain is tea. However this makes no sense as tea is not even grown in Britain, and is consumed traditionally in places all over the world (especially Asia), and to be honest is not actually that popular over here. They might as well have said water was the drink of Britain! To be honest I was quite disappointed, and you could tell in the last two serises Oz was going a bit over the top with vinyards (when hundreds of superb breweries had still not been covered, not to mention specialist beer styles such as Barley wine and Imperial Russian stout). But at least the series didn’t scoop to the same lows as Morrissey Fox did.
Posted by Rob at 23:30 No comments:

A valentines day adventure of beer and food.

It was only previous week when I visited my local the John Bull on an icy cold, blustery night to seek out some quality winter beers. For a Saturday night the place seemed unchanged (despite recent economic conditions) with folk of the local community arriving at a steady pace to enjoy the quality pints on offer. I began as usual reviewing the cask ales available, giving particular praise to Hadrian & Borders new Ouseburn Porter, before finishing with a Westmalle Dubbel. It was by this point that the group of middle aged couples who I was sat next to, had assembled to cheese board with several varieties of cheeses. After chatting to the lady next to me (about beer mainly) I was able to get some cheese samples to see if the Westmalle paired well with any of the cheeses. Luckily enough it seemed to match almost all of the cheeses fairly well. The beer seemed to strip the fat from my palate, almost dissolving it to leave the flavors of both beer and cheese to amalgamate together in a harmonious dance between fruity yeasty phenolics and intense mature cheese flavors. This was more than bliss, and considering Westmalle Dubbel is no lightweight beer at 7%abv, it squared up to anything the cheese board could throw at it, even the blue cheese, which I admit wasn’t the best pairing. Is this inspiration to host my own beer and cheese evening I thought? How many people should I invite and who? What beer with what cheese?

The planning of the event is still pending. But it was only the following weekend that my good lady was preparing a three course meal for us both for valentines day, and with this came the idea to match each course with a complementing beer specially selected. To be honest not all the beers used were 100% adequate for the pairing, but I would class it as a good attempt.

Sear scallops with king prawns on a bed of salad and a lemon wedge. 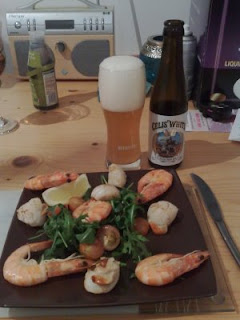 To a certain level this pairing was a shot in the dark as I had never tried Celis white but had an idea that seafood and fish paired well with Belgian wheat beer and this was the only example of the style I had available. Overall the match was quite good with the yeast texture picking up on the scallops a little. The intensity of both beer and food was also well balanced however I felt the beers lively citric flavors and racy acidity really longed for something to dance with or lift from the palate. I would recommend this beer to be paired with something a little more lively, Mexican food maybe? 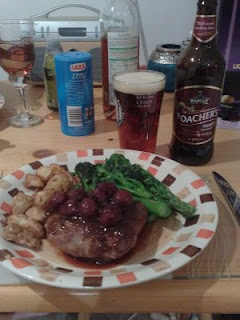 This was a bottle I had kept for awhile just waiting for that game dish to go with. It even advises on the bottle to serve with game. As some will know this a very rich malt balanced beer, brewed with liquorish and damson to make it truly individual. The flavors of the beer seemed to purposely mimic that of the cherry sauce and the beer harmonized well with the meat whilst leaving a rugged sweetness and warming alcohols in the mouth. A success!
The Dessert.
Chocolate pear and ginger pudding. 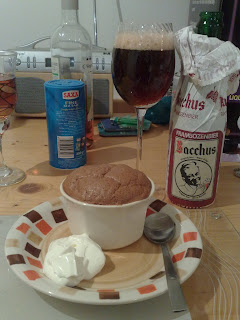 This was chosen from the supermarket earlier in the day after the realization that I had no beer in the house that would match this dish adequately. The rational of choosing the raspberry variety over the cherry was simple, raspberry is a more intense fruit so would stand up to the ginger. As things turned out, I was right, and the lively fruits and spritzy carbonation of the beer seemed to marry superbly with chocolate and pear whilst the ginger seemed to ride alongside, bringing that extra complexity to the piece. This was defiantly the best pairing of the evening.
Something for after dinner.
Kasteel Triple. 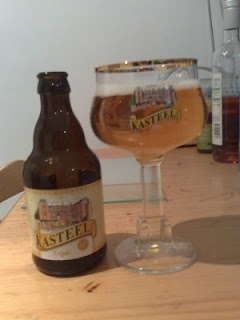 Was by coincidence a beer very suited for valentines day with bold apricot and pear like sweet malty flavors and generous warming alcohols. This one rounded off a perfectly splendid evening of quality food and company (thanks to the lovely Helen my wife to be) with well chosen quality beers. Cheers.

As many UK readers will have realized, this winter has been the longest and coldest for a long time with plenty of snowfall, ice, sleet and blizzards. It is such weather that calls for hard core winter warmer beers such as Scotch ales, Barley wines and various Belgian strong ales. By inconvenience most of the harsh weather has been after New Year, and hence after the bulk of my winter beer supplies had been consumed. Non-the less tonight I shall be visiting the might John Bull, the greatest pub in Alnwick to hunt some winter beers. Landlord Gus usually changes his cask beers to suit the occasion, and does so quite frequently unlike many of the other inferior, pub-co owned Alnwick pubs.

Arguably winter brings some of the most exciting and varied seasonal beers. In fact some breweries even release wheat beers as seasonal (a white colored beer to resemble snow perhaps?) something only done for the summer usually. In fact for my wedding in December I will be having a small but good selection of winter beers available, which reminds me I still have a bottle of Rochefort 10 tucked away in my beer stocks. 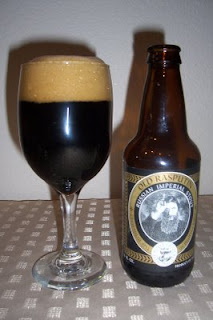 A beer to be sadly missed this winter, the mighty Old Rasputin Russian imperial stout is a mighty 9% abv winter warmer from North Coast brewery in California.