I will always remember the lecturer at University who told me on repeated occasions that British cask beer is a small dying market. But to be honest I have struggled to believe this. Recent news has told of nothing but survival of small independent breweries in the current economic crisis. In reports from both CAMRA and Alistar Guilmore Small brewers have began thriving in the current credit crunch, these have included reports that brewers such as Allendale (Northumberland) and Mordue (Tyneside) have struggled to keep up with demand. Further more if this was not so at the Daleside brewery in North Yorkshire I would not be working in my current position. But the reasoning behind such survival has been put down to various theories. Take for example pricing, the price of a pint of standard mass produced lager at the pub is equivalent to that of a cask conditioned ale, considering that the drinkers have less money they thus want more for their money. Secondly in the current age real beer has gradually gained recognition, in America more obviously than over here. But the UK has seen more and more brewers springing up in various areas as well as more pubs selling at least one cask product or even just expanding the beer range alittle (believe me Iv seen it in my area). Beer festivals are frequent and conducted in all areas of the country and events such as Beers of the World live have aimed to bring the experience of craft beer enjoyment and understanding to a wider audience.
Coincidently this can be compared to the food market. Today health conscious customers want to know more about what they eat and are attracted to products that are not packed with artificial colours, flavours, starch adjuncts, trans fats etc, etc. One can easily argue that this can be applied to beer. Even more good news is that late this year will see more beer related programmes on TV thanks partly to Neil Morrissey and Co's new documentary about opening a brewpub in North Yorkshire. So finally after all these years of wine stealing the limelight of being the greatest respected fermented beverage (mostly due to social snobbery) Beer can finally gain back the respect it deserves. 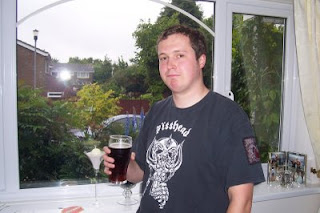 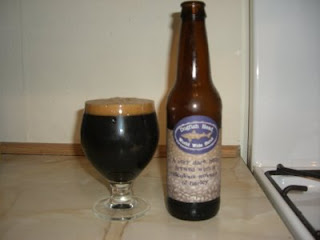 Greetings again readers apologies for the late post. Of recent times I have been given the opportunity to do my first official Beer journalism work, and by that I mean writing for an official beer magazine, Beers of the World. As a guest taster I have had to taste and review 9 imperial stouts (although one was a porter). Many of these I had been hunting for a ages now, so it was a great privilege. The list included:

Samuel Smiths Imperial stout: An old favorite of mine and looks like a baby at only 7%abv. Nicely drinkable, roasty and elegant as always.

Zywiec porter: A lovely middleweight dissert like beer with soft creamy textures. Scored highly but seemed out of place as the only porter.

De Struise Brouwers. Black Albert: This one I was particularly fascinated by. All the usual funky yeasty character you find in a Belgian ale well integrated into a 13% abv stout that exceptionally drinkable.

A Le Coq. Imperial extra double stout. 9% abv. 2003 vintage: Drinks more like a port wine with virtually no carbonation, but tends to grow on you with an intriguing lethery/ oily texture and big ‘alcohol soaked fruit’ like flavors.

Dogfish head. World wide stout: Basically an 18% abv monster of a stout that attacks full on with warming alcoholic flavors and tastes half way between a brandy an a stout/barley wine. The thing is, after hearing so much about Dogfish head and hunting them for so long I was intrigued to get hold of one. But the term used by one of my Uni mates from Canada often used, ‘over the top’ seemed somewhat fitting for this example. Another term, ‘insanely over the top’ also fits as the palate blasts one with a whole spectrum of malty and warming alcohol flavors all at once. However although overpowering at first the beer does seem to grow on you and develops into a lovely warming after dinner drink of huge complexity.


Overall the two highest scoring were the Black albert, creative and elegant, against the bold and beautiful Great Divide Yeti Imperial stout from Denver Colorado. In fact most of the American examples seemed to aim for a similar effect of boldness to the palate, Left hand seemed to go alittle on the sweet malty side, whereas Dogfish head seemed go for the stronger the better approach. But do you really need to push things to the extreme to make the best extreme styles? Examples from Zywiec and Samuel Smiths proved this wrong whereas Great Divide Yeti suggests extremism could be the way forward in the style. In my opinion there is always wrong ways and right ways to develop massively flavored beers. For this the brewer needs to keep in control various elements of brewing for example the temperature of fermentation, the quantities of colored and roast malts used and the level of attenuation. But a major factor of imperial stout brewing as with other high gravity beers is time, as such beers can take years to develop in character.
Posted by Rob at 19:39 4 comments:

The beer before time

Greetings all and as we know it is the start of a new month and thus a new beer style of the month. This time I have taken the option of another age old British beer style, originating from London, that became the most popular beer style in the UK during the Industrial revolution. As with IPA porter helped fuel the British empire, except where IPA was sent abroad Porter was drank in-land. Originally the beer was created from an innovative beer called 'entire butt', a beer brewed to mimic the palate of blend of beers called three threads, a blend of old and young beers that had to be blended by the publican in the cellar (as they had no beer engine and thus no hand pumps) before serving. The popularity of entire butt amongst the porters of London eventually gave the beer its current name.

But after the 1830s the style went into decline as the public slowly turned their favour to lower gravity less aged beers such as mild or pale ale. Today the style is recreated by craft brewers across the globe, commonly crafted from grist combinations that include pale, crystal, chocolate and black malts often bittered with old style British hops such as Fuggles, Bramling X or Northdown. In fact from word of mouth I have heard recent praise for the porter made by the Daleside brewery which I work for, by CAMRA members, and currently my home brewed example of the style is slowly maturing under the stairs.
Posted by Rob at 19:45 7 comments: