A small quarrel with wood.

Something I realised recently after reading this post from Tandleman is that of recent years I seemed to have lost interest in oak aged beers. I was trying to think; what was the last big oaky beer I was impressed with? I'm sure I tried a few and the novelty factor was there but were there any exceptional ones at all?

Before I start I'd have to say that my exceptions to this are American sours or lambics. Most beers that involve purposeful infection via microrganisms in the barrel are pretty interesting. What I'm really getting at here are beers with a big influence of oak. Take for example (back in the day) my first taste of Harvestoun Old Dube. When it came out it was indeed highly rated, it got endless blogger attention, but somehow (despite thinking it was a decent winter warmer) I just didn't get the hype. In the same way I remember thinking Brew Dog's Paradox was crazy and intense yet somhow only tolerable in a single dose. More recently I've had a number of offerings from modern self-labelled 'craft' brewers. Big abvs, big beers, loaded with massive oaky tones yet left thinking that the Imperial Stout would have tasted much better without the resiny wood notes. Stuff like Brewdog Mikkeller Devine Rebel also had me choking (that's 330ml of pain right there).

Admitting this makes me feel slightly guilty as for my entire life as a beer geek I have always tried to embrace every style of beer (without favourites). Belgian sours, smoked beers, wheat wines and all forms of mega hopped-up IPAs are challenging and yet approachable for me. Yet when the tast of oak is anything more than subtly I'm never really inclined to hunt it out again.

But I do have an exception to this...

Here it is, re-edited and ready for release in all its glory. 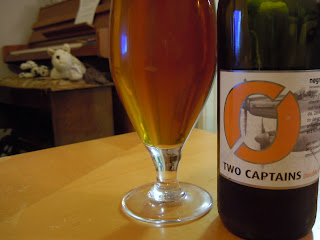 Double IPA is not normally a beer style I give a lot of attention to. This is mainly because many of them rest on that fragile line between brilliant showcase of hops or straight pain. Normally it's a bit of both, like eating chillies or really hot curry. Usually I find the style best appreciated mid way through a session after warming up on a few hoppy pale ales.

Anyhow, Nøgne Ø is a Norwegian brewery I've occasionally come across and till now have enjoyed their offerings. Nøgne Ø Two Captains is no exception. The beer was the brainchild of award-winning homebrewer Jan Halvor Fjeld. It's 8.5% (on the richtor scale) and a nice golden bronze in colour. Aroma wise you get up front orange pith and pine (dry hopping of centennial?) with a hint of marmalade. The hop attack on tasting is up front, pithy, resiny tangerine and Centennial hop esque supported by a heavy caramelised malt base. The overall feel is slightly on the heavy side with warming alcohols and fruity fermentation flavours adding to the avalanche of resiny citric hops making this fairly complex for the style. In short, its not overly intimidating, a little more complex than most double IPAs and has a nice balance to it. That's a thumbs up from me.
Posted by Rob at 20:09 No comments: 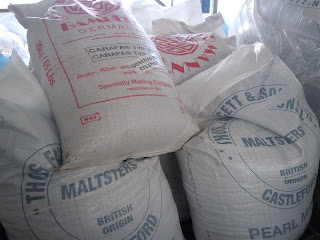 Pandazilla week. After all the suspense it finally came round. Pandazilla week was no ordinary week. For a start we had to spend the entire Monday without a working cask washer, and since it was Monday/cask washing day this was detrimental to our productivity. Sadly this meant the actual Pandazilla brew would have to be postponed till later in the week so we could make up for lost time. How much time no one knew as we were reliant on the technician's arrival which meant we would probably end up behind scedule. Many people that know me will know that I don't do behind.

Tuesday; Arrived at work to find still no technician. To cut the story short it turned out that we needed to find one thousand brown M&Ms to fill a brandy glass or else the technician wouldn't turn up that morning. So assistant man Dave pops his head round the door and mentions a little sweet shop at the end of town. We go, and it's closed. So there was me Dave and Matt Fawson breaking into this sweet shop at the end of town. Guarding the shop was this huge Bengal Tiger. I managed to take out the tiger with a can of mace, but the shop keeper and his son...

That's a different story all together...

Well I won't finish because by now many readers should have realised that most of that last paragraph was ripped straight out of Wayne's World 2 and was mostly fictional. But sure enough the technician did turn up and taking advantage of some free labour from some brew lab students (thanks Chris and Adam for all the hard work) we managed to blaze through a lot of casks, rack a heap load of stock and generally catch up.

Wednesday; the brew kit gets warmed up with a batch of Workie Ticket and Me and Dave head out to Sunderland for a meet the brewer at The Corner Flag. Sadly the place was largely empty so it wasn't to be.

Sunderland is a lovely place filled with lovely people. Remember that, lovely. 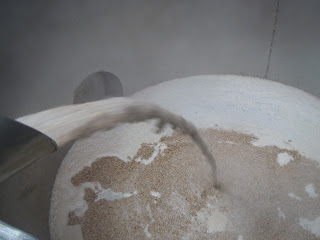 Waking up like a coiled spring, it was finally the Pandazilla brew day. Since this was to be the second batch of a double brew this gave me time to get in early and get my multiple hop additions for my complex hopping schedule weighed out. Summit hops really are quite pungent. I get earthy spice and orange and a feel of raw, uncompromising hop power. I have often thought that if Darth Vader had a favourite hop variety, he would choose this one.


After a runoff to the fermenter that lasted a little quicker that I would have liked, worts were brought to the boil and a copper up gravity was taken: 1058! I know I over sparged but F**K! That's like out by nearly ten degrees! In short the situation was recovered by boiling the shit out of it for an extended boil time. This, combined with a massive hop bed in the copper (bigger than any I have ever seen for a 20 barrel brew... But this was only ten) meant  a fair volume may have been lost (mainly) due to evaporation. But I was pleased that the wort that was pumped into the fermenter smelt awesome.

A day on and I'm taking the day off chilling out on the sofa. Then I see this picture on twitter...

What was that I was saying about spring?

Normally around this time of year, most people are usually sick of winter (this time last year Alnwick folk were virtually praying for the ice sheets to withdraw). The seemingly endless icy conditions and darkness make struggling fermentation' struggle even more and journeys to local pubs hazardous. Though finally, it seems spring is on the way.

It feels odd leaving work in broad daylight, almost dirty. The conscience is saying "why are you leaving so early, it's not even dark yet? Is this skiving?". I'm not complaining. Some may remember a while back that I mentioned that spring was my least favourite season, this is still true but I do like it for some reasons. This spring plenty of exciting developments are underway at Mordue Brewery. Spring Tyne, Bunny Hop, the mighty Pandazilla and other secret projects (must remind the gaffer to get a sheet over those weapons of mass destruction before the next CAMRA visit). And let's not forget Newcastle Beer Festival. 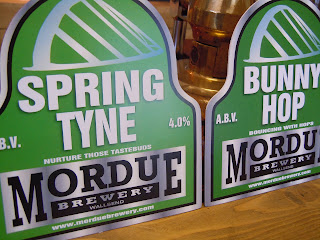 So yes, spring isn't all that bad and I am also aware that this is  my last spring not being a father. Better enjoy it.