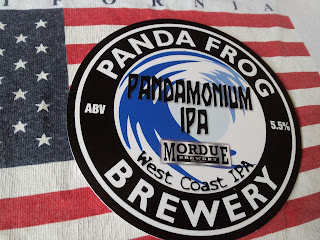 
Excessive quantities of US hops...


That's right, another Panda Frog project has been released into the wilderness. Pandamonium IPA (I just couldn't resist that name), soon to be kegged and bottled, is the sixth instalment of the Panda Frog saga. 5.5% and 80IBU. Brewed in the style a classic Californian IPA, Pandamonium is bright and vibrant with plenty of that classic grapefruit kick and smooth resiny pine. Great fun was had brewing this one, especially the hour-long weighing out of hops interval. Officially the 'brewing my dream IPA' long time fantasy has been fulfilled and the results were most pleasant. But don't just take it from me, hunt the stuff down now.
Posted by Rob at 21:52 No comments: 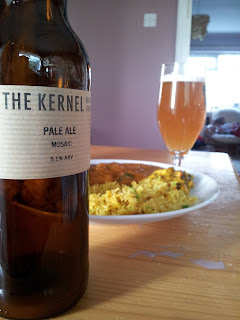 Beer and curry, a difficult combination to beat. Beer and pizza comes close. Tonight's chosen beer, The Kernel Pale ale Mosaic is a single hop variety IPA from the much reputed Kernel brewery in London. The curry was by none other than Alnwick's newest and finest Indian restaurant and takeaway Mivesi.

The thing about bitter beers with spicy food is that it only seems to work up to certain extremes, beyond which it becomes painful. For me this combination edges towards the pain threshold but works well enough that it doesn't matter so much. The Sri Lanka curry offers coconut, tropical and lemon flavours that complement the beer well whilst intensity wise nether hop bitterness or spice seemed to dominate. Overall a nice yet rather intense pairing that almost borders on the 'intense bitterness with intense spice = pain' theory.

I found the Mosaic hop to be quite fascinating and complex, combining a little of that galaxy esque floral melon and passionfruit with soft citrus and a bitter lime edge. The aroma is very pungent with a smooth bitterness and there's a slight earthy dimension to it to. This is obviously one of the new breed of super hops that can act great as a stand alone hop variety in a beer. A good offering from The Kernel, though you would never guess it was a single hop beer.

Is it me or does chap on the label look more cartoony than he used to? That aside I'm sure this beer used to look darker. 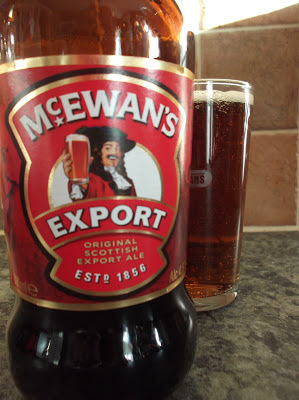 Basically McEwan's Export goes a long way back in my beer-drinking history. It's been a hell of a long time since I last re-visited it so, seeing it on the supermarket shelves the other week, I thought 'what the hell' and picked up a bottle of the first beer I ever tried. So before Mordue or Daleside brewing, before Rob's beer quest university days and the rest of it around 70ml or so in the bottom of a tumbler glass was all my dad would allow me. The dark brown liquid with the frothy white head poured from a can. To be honest I never liked the taste much, but I felt like a big man drinking it. An acquired taste you may say. Eight or so years later I would be exploring new beers like Carling, Stella or Newcastle Brown.
.
My first year university days involved a lot of beer consumption. As the grant for the term came in I would visit the local Booth's supermarket to stock up on bottled beers. Bottled ales from around the nation would adorn my bedroom shelves from the Waggledance to the Old Peculiar. Yet the odd four pack of McEwan's would always be tucked away at the back, four red cans to conveniently take to the next house party or stash for the odd camping trip.

Towards the end of the night is when the McEwan's would come out. The sub on the bench role is how I used to think of it. Once I'd lost the will and abilities to ponder over the nuances of a Black Sheep Riggwelter or the closest local micro's 'Real ale in a bottle' (the word 'craft' in those days existed only in America) the McEwan's would be cracked open. Often accompanied by lashings of Bells Whisky it was almost like a chill-out beer - cheap and requiring little effort to appreciate. The correct terminology, taken from a former, great blogging master is neckable grog.

I think everyone needs neckable grog in their lives from time to time which is partly why I picked up this bottle. I have never tried the stuff from the bottle but pouring it out into a glass for analysis was almost like studying ancient ruins yet somehow the nostalgia wasn't as strong as I thought it would be. In fact I remember it  different to this, darker with more deep grainy flavours. I suspect it might have been toyed with over the years. The aroma and initial flavour is of sweet, burnt cinder toffee. Sweet, grainy, crystal malts follow into the finish. It's obviously heavily filtered with a prickly carbonation (a common feature of many triple filtered, pasteurised supermarket bottled beers) but there's still a very subtle underpinning of English hops.

All in all it's not a bad beer. Looking back at all I've tried between now and my first taste poured from the red can I've had a lot worse. The blandest mass market lagers. The vinegary pints, the half stale on the way out pints, diacetly bombs and ropey, vegetal and even explosive bottle conditioned beers. All of them fall short of this. McEwan's Export is the sort of beer you'd be happy to find in some distant beer desert abroad at a Scottish themed bar, or at someone's party in a working men's club where options are severely limited. Yet sadly that's probably the best praise I can give it. Happy memories though.
Posted by Rob at 21:46 7 comments: