Pleased To Meet You 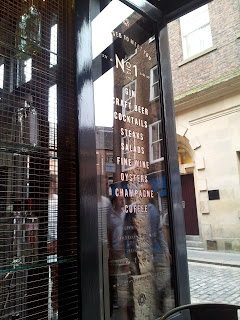 If you haven't worked it out it's the name of the pub, or should I call it a bar. Pleased To Meet You is a relatively new craft beer hotspot in Newcastle I have been meaning to visit for a long time. It seemed everyone's been, except me, so I had to do something about it.

Before I start I must mention that this isn't another one of those bars you wished you could sit in for an entire day and try the bulk of the beer range getting merry in a sort of beery paradise. This is more of a bar you wished was situated next to your house, so every few days you could pop in to try something new, whether it be more beers from the taps, new whiskies, wines or even cocktails. You could devote an entire evening just to getting to know gin, or you could continually chase the changing guest draft beers. In short the emphasis on choice here is epic, with an atmosphere that's very charming and friendly. 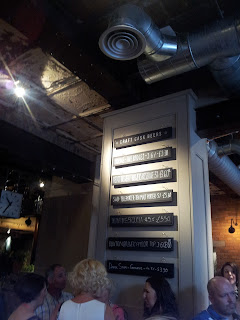 So where to start, cask or Keg? Way more was on offer than could possibly be consumed in a sitting. The likes of Dark Star, Thornbridge and Marble were out in force while Tyne Bank and Mordue held the local front. A few beers down the line and the urge for something different arose. Amble Butcher's Chorizo and saffron mash with a De Struise Westoek XX is a half decent combination. This weighty 8% Belgian strong ale has a sweetish body and lots of tart wild yeast character with dark fruit. Classic Belgian to the core. Rustic, nuanced and unpredictable. More of a random wildcard pairing given the menu advises pairing this dish with 'gutsy red wine or a powerful hoppy IPA' but it worked ok. 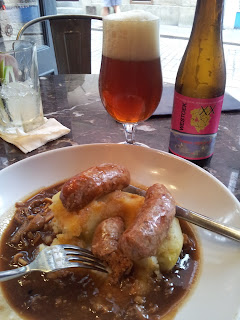 Next up was the dessert named 'coffee and doughnuts' with my chosen beverage Dark Star 1910 Porter. This beer is one clean cut hit of Espresso with bitter dark chocolate that contrasted my doughnuts quite well. The menu suggests pairing an imperial stout but I honestly thought a heavy barley wine or rich Belgian strong ale would do better at lapping up all the sugary deliciousness of this dessert. 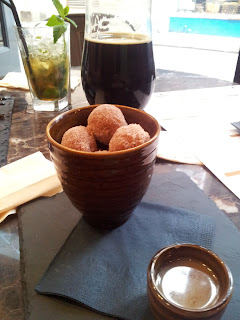 Next up a beer from the menu under the category 'peculiar' meaning not really fitting in a style category. This I like. Bristol Beer Factory Vintage 2012 sort of comes across a tad like a well aged old school barley wine but at 6.6%. Nice dried sultana and apricot esters over underlying woody notes. Probably excellent with a nice medium strength cheddar that's all about the texture. 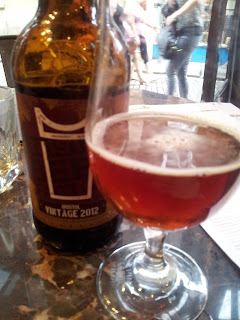 So after a cracking evening was time to finish by turning to the extensive whisky range. Scottish, English, Japanese, American......

Again, this is probably worth another visit.
Posted by Rob at 20:56 2 comments:

Three beers from the fridge 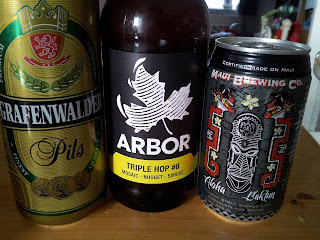 One pan of Jambalaya 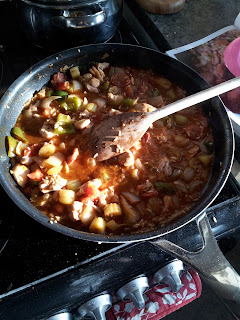 But which one to pair with it???

This is another one of those posts that arose out of coincidence. So it was Saturday night and the wife was cooking Jambalaya. I was pondering over which beers would be the better match for this Southern American dish. It later occurred to me that Mark Dredge had covered this way back in 2011, coincidentally using an almost similar set of beers. Nothing wrong with repeating an experiment I thought, so let's get them all opened.

Well it was almost a repeat. A big difference here was that this Jambalaya recipe was taken from the Hairy Bikers, and does not involve scotch bonnet chillies (like Dredge's Jamie Oliver one). In other words, the Dredge was obviously pairing beers with a much hotter dish. Jambalaya is a kind of mixed meat spicy risotto and in Dredge's 2011 experiment, the unexpected winner was the underdog, none other than your staple macro brewed Budweiser lager. For this reason my equivalent, the Graffenwalder Pils was the favourite to conquer in tonight's pairing challenge. 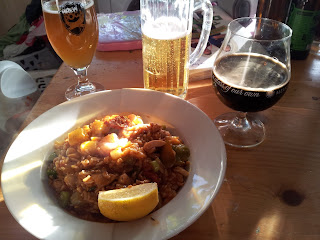 Shoppers at Lidl supermarket may be familiar with the 4.8% Grafenwalder Pils. Brewed probably in some random UK-based factory owned by a faceless corporation. At only 85p per can it's not a bad take on your standard pale lager. Heavier and less neutral than Budweiser with a touch of cooked corn/DMS about it which I don't mind too much. With Jambalaya I immediately noticed what Dredgy was on about. The clean refresher certainly works with this.  The lager sits back whilst cleansing carbonation provides a nice contrast.

A nice, hoppy, bottle-conditioned 4% blonde ale. Plenty of soft fruity citrus and pine going on here. The slight yeast haze brings a smoothness combined with soft carbonation. For some reason it seems a bit thin, but nice flavours with the Mosaic thing obviously dominating. Enjoyed this greatly with Jambalaya, the nice citrus theme complements the mild spice nuances of the dish nicely. This beer might not have the cleansing power of carbonation Grafenwalder had but for intensity and flavour harmonies it sure hits the mark.

Now for something different. Aloha B'ak'tun is a 7% Belgian stout aged with chocolate and spices.  I never realised when I bought it that it was a Christmas beer, and a bloody good one at that. Christmas beer meets stout. Cinnamon spice leads to big sweet dark chocolate and coffee, alcohols warmth and Christmas spice. For me this is my favourite stand alone beer of the three. However with Jambalaya the mix is crazy. Bitter dark chocolate contrasts the spice brilliantly yet everything else meanders off in various directions. Very complex but doesn't completely work. It also seemed a bit weird drinking this on a sunny July evening.

So in conclusion this was a close one between the Arbor and the Grafenwalder. I honestly thought that if this dish had chilli kick the 85p lager would have walked it. But because both beer and food were on the moderately subtle side myself and the wife both agreed that Arbor Triple Hop worked the best.
Posted by Rob at 15:20 2 comments: