That's right, it's certainly gone quickly. 2015 has been an interesting year, for me I would say 2015 has been a year of change. That point where you think you had the game sussed, everything under control but then the game changes. Like looking after two kids instead of one for example.

While there's been sucess there's also been set backs but without a doubt the arrival of Harvey has been the highlight of the year. SIBA awards from IPA and Killswitch 51 also perked things up and on the whole it's been a good  year. Having a second kid has kicked ass more than it's been hard work, yet 2015 on the whole has been hard work. Nearly as hard work as 2012.

Not a great number of beers have been discovered this year hence the lack of material on the quest. There's been some intense periods of brewing (again affecting blogging duties) especially during the summer. Of course the wider beer world is changing too. More successful independent brewers being bought out by the dark side. Or is it really the grey or teal blue side depending who's opinion it is. The big get bigger, cover more territory to compete with the small brewers getting more numerous and diverse.

Locally more breweries are opening up, too many for me to keep up with. Will probably get to try the wares of many of them at next year's Newcastle beer fest, by that time another new wave of upstarts will be on the way.

One thing that has often surprised me is how much the North East beer scene has thrived in recent years. Despite the expanse of competition the respective brewers of our region are up scaling, thriving beyond the region's borders and winning awards. I am still enormously proud to be part of this region's beer scene and represent one of the oldest most respected breweries of the area.

So at the end of this very balanced year, I may not feel we totally smashed it like 2013 but I do feel the prospects ahead ain't half bad. Happy new year everyone.
Posted by Rob at 18:03 5 comments:

Being prepared for; The December effect 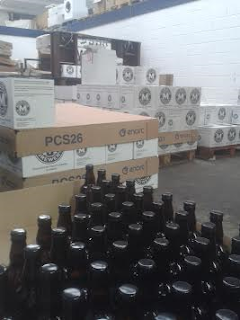 December, the busiest time of year for local trade at almost any brewery. Sometimes it's called unpredictable, almost every time it goes by like a festive flash of brewing, racking, cleaning, assembling orders and so on. Before you know it the relatively steady January period is here and it's all over.

So what is the December effect? Big sales and lots of beer going out? It's more complicated than that. You plan ahead, 10-20% increased stock flow from November. All the brew dates are in place, especially in response to national orders. But at some point things change, almost from under your feet, a few barrels of product leave the door. Next thing you know another core beer gets hit, then another. Panic sets in, next week's stock levels look somewhere between insufficient and very tight.

So within the space of an hour or so an entire fortnight's brew schedule has been re-written. Brew schedules get re-written far more often in December. So the answer must be simple I hear you say, just brew a heap load of beer. Yet one of the worst outcomes of this season is the possibility of landing in January with masses of (by then slow moving) stock.

So, like a very drawn out penalty shoot out the December effect is a long, enduring, nervy balancing act of stock fall against volumes brewed, solid graft against party, alcohol and relaxing with the family. So being prepared for the December effect isn't really that simple, its more about being prepared for anything.
Posted by Rob at 20:45 6 comments: