Have you ever spent nearly an entire afternoon bagging hops into small pellet sized pouches? Well that what I was doing last Saturday. Me my parents and future wife took on the task of packing up around ten bags per each of the ten chosen hop varieties we needed, all of which are to be used as wedding favors for my imminently impending wedding day. 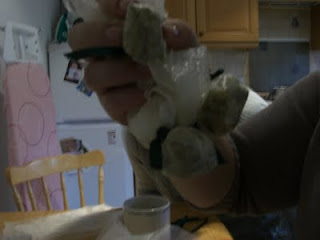 The plan is simple. During the sit down meal the ten tables (including the top table) are named after different hop varieties and the individuals on the table get one bag of hops each of the specified variety. The varieties were kind-of chosen to suit the personalities sitting at each table, but were arguably also chosen because they are amongst my favorite varieties. The varieties are as follows:

So mostly British and American varieties, but the absence of German varieties is mainly because Helen didn’t think the names sounded classy enough. 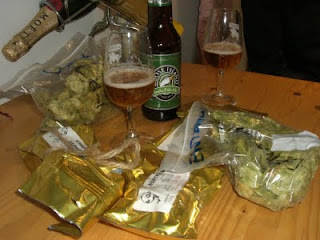 So whilst indulging in the brilliant aromas that filled the kitchen and educating my Dad on each variety at a time as we went through them I decided that this would be a fitting moment to have a beer that truly showcases brilliant hop aromas and flavor. So from the cupboard came the famous Goose Island India Pale Ale from Chicago, which did the trick brilliantly. With a great aroma and not so much bitterness I can understand how this has often been termed an English style IPA. Its not overpowering at all and everyone loved it, especially my old man who thought it actually made the experience of bagging hops ‘more’ interesting. The only slightly worrying part of the day was finding that the Northdown had gone a little brown, but the Cascade for the top table were super fresh.

Noticed allot of collaborative brewing going on these days. Stone and Brew Dog, Thornbridge and Brooklyn. It was only during my stag weekend that me and the lads from back at Heriot-Watt university (Simon and Ed) decided it would be a good idea to try one, even though we live hundreds of miles apart. So this Ed's 'Leaky Tap' home brewery down in Surrey Meets my 'Panda & Frog' kit used at Daleside brewery, meets Simon's 'Amber Dawn' home brewery in Cambridge brew was decided to be conducted as three separate identical as possible brews in three different counties. 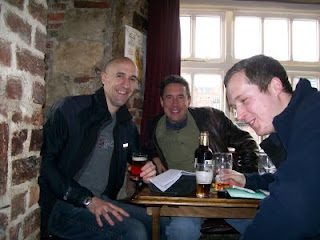 Me Ed and Simon on my stag weekend. 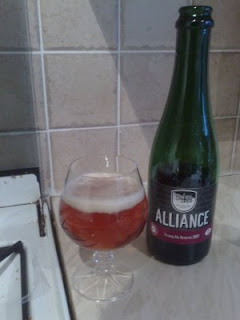 
Following this, once we have all the beers bottled we then send each other the beers for comparison. Obviously we knew of non-controllable water differences, copper evaporation rates and the fact that Ed and Simon can’t use Daleside breweries house yeast strain so have to opt for a similar commercial culture (brewing this at work, I didn’t want to risk any wild yeast contamination problems) . But we thought differences in the results would make it more interesting, like a taste the difference southern vs Yorkshire vs south eastern comparison.

The plan was for an old school British India pale ale, because in our day at Heriot-Watt University doing Brewing & Distilling as post grads, we were the only three English students on the course. So the style was both patriotic and fitting because at the time we were all along way from home (sort of), and amongst many Indian students (so you could almost imagine your in India, ignoring all the Scottish weather, lectures and signs in English etc).

So here is what I have brewed so far, Ed and Simon are still to brew:

In the mash tun.

(Note: all percentages refer to extracts not by weight)

The boil lasted 1 ½ hours with the following additions.

Fuggles 0 min added after wort had cooled for 30 min.

Pitched with Daleside breweries house yeast strain this one fermented down inside of around 4 days before being force cooled and transferred to demi-johns. From recent tastings the mid amber beer is firm and hoppy with plenty of fruity English hops dominating and a slight harshness that hopefully shall fade with time. Bottling commences Monday evening. Until then shall look forward to another tasting. Anther thought was wouldn't it be cool if Daleside did a collaborative brew, with Roosters perhaps? Yorkshire Dales? Or Acorn? We could put it on the website and make a video even? Can't see it happening though.
Posted by Rob at 09:40 4 comments: 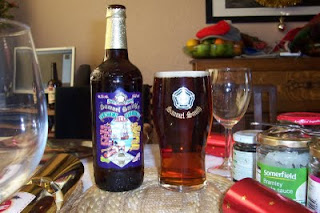 It's around this time of year that I have all my warming winter brews stockpiled up in my beer cupboard ready for the winter season. This annual stockpiling or gathering of beers I term 'Operation Winter Beaver' and usually starts in October time. This year however I have decided to take this a step further and have decided to separate the beers into different groups, each group to be consumed on a different days. The largest and most impressive of these is the group for Christmas day. So as the build up for Christmas gets going, here's what I will be drinking Christmas Day. The list is in approximate order starting in the morning. Let me know what you think?

Guiness Forgne Extra Stout (With dessert, which is usually Christmas pudding. But I don't think anything could top the legendary pairing experience of chocolate cake and cream with Meantime's Coffee Porter from back in 2007)

Svyturys Ekstra (Optional support pilsner depending where mood takes me)

Cantillon Iris (Highly regarded wild beer admired by experienced beer lovers Boak & Bailey. This was a must have when I visited Cantillon earlier this year)

Struise Brouwers Pannepot 2007 (Picked up in Brussels and have never tried before, looks like it could be quite dark, its spiced, and its 10% vol, so a definite wild card for the day)

Stone Brewing Old Guardian Barley wine 2009 early release (The optional bonus beer, for a possible beer and cheese showdown in the evening! My parents picked this one up whilst over in California visiting my auntie Wendy)

Well that's what I have so far, some of this may be changed round. But until then I have weddings to attend (my own) and some quality beer hunting in Hawaii to carry out. I must also note the mixed responses I get from people when I talk about 'operation winter beaver' as the word ' beaver is interpreted in different ways. But its usually carried out pretty accurately. I thought another quality idea would be to set up some sort of 'follow Rob' kind of feature on the blog, where users can click on it any time on Christmas day and it would bring up what beer I'm drinking e.g:

'it is 4:43pm, I will now be approximately half way through the 500ml bottle of Wood's Christmas Cracker 6%abv'

And so forth. But the problem is I don't have the computer knowledge to pull it off. Like the Idea tho.
Posted by Rob at 09:23 4 comments: 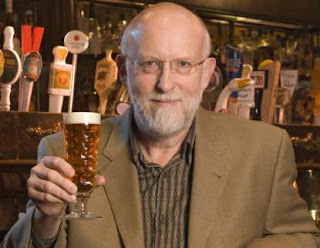 
Have you ever read a book and thought afterwards that if you had written it you would have written just about the exact same thing. Well that's what I thought about Randy Moshers Tasting Beer. Its a pretty interesting read that outlines pretty much all that is fascinating about the beer world.

But what really sets the book apart is that Randy's material seems set in the new world of craft brewing. No extensive ramblings on traditions and how such and such brewery has been been brewing real ale for so many years. This stuff just cuts to the core factors that make beer and brewing fascinating, diversity of flavour, creativity, beer styles, culture and science.

I will repeat that again.... Science. Something that's often swept under the carpet alittle by some beer writers. And the section on beer and food is also very informative. After this I will be strongly hunting Randy's other book Radical Brewing. As a beer writer and experienced home brewer Randy hails as some kind of Yoda like character of the brewing force. Strong with the brewing force, orator for the rebel brewing alliance. Let his work continue.
Posted by Rob at 16:00 5 comments:

A Halloween of more beer.

It’s the same story every year. I head out to collect my bottle of Wychwood Hobgoblin and any other bottled seasonals from the supermarket, we watch some scary films, then go to bed. Well most years anyway, Halloween has seemed pretty dull since I got into my twenties. This year me and the lovely Helen decided a slightly different approach was needed after a heavy stag weekend the previous week, so we got a log fire going and had a roast beef dinner. 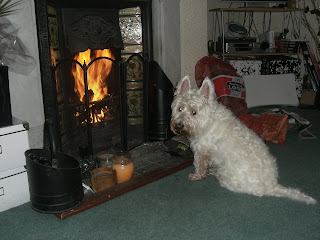 Our dog Troy is intrigued by wood fires, they make him sleepy


Oddly enough not many Halloween seasonal beers could be found this year, this happened last Christmas and I was told it was something to do with the recession making the supermarkets want to tone down that kind of thing. But anyhow I had some decent fireside beers in but no Hobgoblin this year which was sort of sad because it would have done a better job of pairing with the roast beef than the Hambleton Ales Nightmare that was used, not that it’s a bad beer, it just lacked that heavy malt substance that was required for the pairing, next time I’m going for something on the lines of a Brooklyn Brown ale, Meantime London Porter or a heavy Belgian Dubbel. 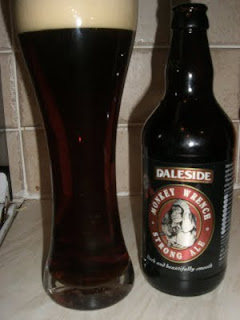 Daleside Monkey wrench is a pretty solid strong ale for the fireside, favored by many of the Daleside staff. The way I see it, Black Sheep have their Riggwelter, Theakstons have Old Peculiar, Daleside have this voluptuous, caramelized expression of rich malts that more than gives the latter two a run for their money. I have to admit the cask version is much superior. 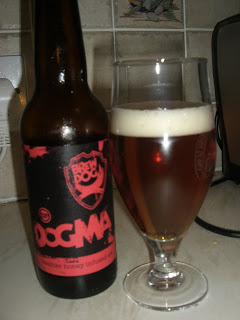 Next up was this bizarre little number from Brewdog. Dogma (formally known as Speedball) took awhile for me to get my head round. The easiest way to describe it is to say its almost like an American IPA base beer with a crazy mix of honey and spices added. At 7.8% a.b.v the bottle mentions the ingredients Guarana, poppy seeds, kola nut and heather honey. The palate opens with warming alcohols and a clean smack from plenty of US hops. Then it comes at you with interludes of honey, spice and even some strange undertones of cocoa and heather over a nutty texture that seems out of place. Pretty fascinating stuff, and 10/10 for effort to Brewdog for this one. But the flavors just didn’t harmonize in any way, the effect is bizarre. Its almost like listening a record from The Smiths full volume whilst someone plays some new school Cannibal Corpse over the top of it. Now you see what I mean.

And finally we did watch a scary movie, but wasn’t nearly as freaky as this beer. Overall I would say its worth a try, but not one of my favorite Brewdog beers.
Posted by Rob at 21:25 5 comments: