Now here's one of those random Twitter-advertised events I actually agree with. An excuse to drink more different types of beer during the month of January in spite of neo-prohibitionist driven 'Dry January'. Obviously a vicious evil ploy to crush the beer industry. But let's not forget the truth; the moderate consumption of beer increases bone density and reduces the risk of cardiovascular disease. So all in good health, the aim of the game was to try many new 'never tried before' beers. 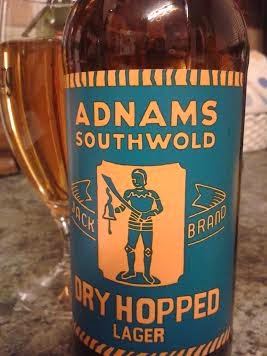 First up, from Adnams more experimental arm. Jack Brand Dry Hopped Lager. The crispness of a pale lager with tangerine and tropical notes. Overall quite pleasant. Next up, from Roosters new canned range, Fort Smith. A rather good beer it is too, brewed by none other than Oliver Fozard a brewer who was trained by the same master as myself. Although I would argue that Craig taught me some things that Olly didn't. Namely the five-move exploding heart trick. Nonetheless Fort Smith clean and up front with grapefruit, pine and tropical hops leading to a snappy lingering bitterness. 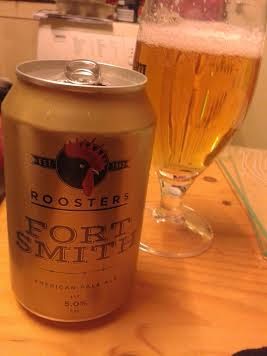 January also brought some IPAs, my favourites were both the most balanced. Siren Soundwave was resiny, smooth and all tropical and citrus. Lagunitas IPA surprisingly had more body to it than hop attack. Lovely, fruity, balanced and reminded me of my first ever Goose Island IPA. Salopian Sentinel and Tiny Rebel Hadouken were both big abv, heavy malt presence with lots of Cascadian hops struggling against the tide. Not really my sort of thing. 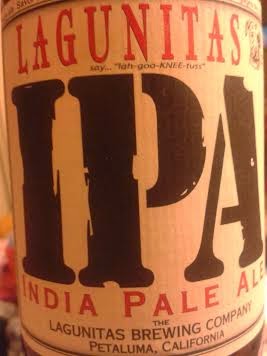 Moving on from IPA Schlosser Alt was a class act. Lovely waves of toast malt leading to caramelly finish. On a similar note Augustiner Edelstoff was a finely tuned 5.6% export lager. Bold and malt forward yet crisp and toasty with virtually no hint of alcohols. Obviously put together by textbook perfection in brewing practice. 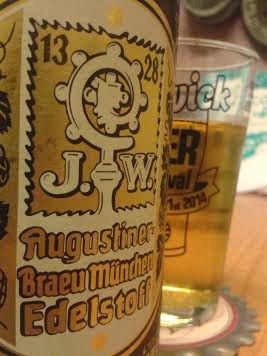 Bigging up the malt front also was Black Sheep Imperial Russian Stout. Which is sweetish and roasty with lots of coffee and dark fruits going on. A nice Imperial stout with good drinkability. Although to top things off I had to have a beer and food pairing somewhere down the line. 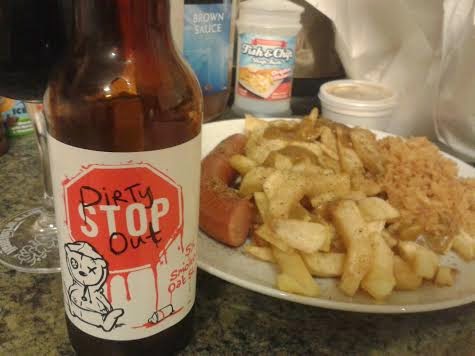 Tiny Rebel Dirty Stop Out is a smoked outmeal stout with a subtle smokeyness and brooding bitterness. A quality pairing for chip shop smokey sausage, chips and curry. A rather splendid end to the month.
Posted by Rob at 20:35 8 comments:

The twelth Geordie beer of Christmas 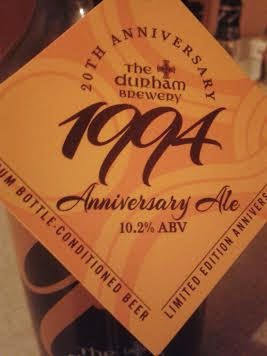 Landmarks are a sentimental aspect of the brewing industry. These days the Anniversary ale is a statement of perseverance, resilience, survival and pedigree. Every successful brewery on earth will one day be seen as dated; Will lose shelf space for the 'new kids on the block' and will be pressured into evolving their product range to suit the new market. This isn't about siding with the old timers, this it seems is the natural way of things.

For me the bold and eccentric bottled beer range of Durham Brewery is what sets them apart from the early days. Long before your Warheads, Imperial Cherry Stouts and double IPAs Durham's strong British and Belgian style ales were the region's high-octane, highly sought-after mega brews. Make no mistake this was in an era where putting out such beers that didn't 'play it safe' took balls.

In obvious honour to this heritage, Durham's anniversary ale is a 10.2% strong ale brewed with pink peppercorns and orange peel. It's certainly an interesting beer. Sweet orange and spice with an almost opal fruit like nuance ride on lively carbonation. The weighty, sweet orange like feel is stripped down by drying carbonation giving a kind of Belgian Tripel/Golden Strong ale like elegance to it. It's more tangy, snappy and racy than it is voluptuous. It's certainly worth trying but for me doesn't rival some of my best experiences with Durham beers.

Then again who am I to judge 20th Anniversary beers, It is after all my turn next...

So that's all from the twelve beer series and, despite restricting this series to local beers only, the overall standard has been great. This year the cheesy cartoon labelled bottles from random micros under dodgy names like Santa's Scrotum have been avoided. The same goes for discount supermarket offerings, all chosen in past series' to fill out the numbers. But sadly, after five successive years of 'twelve beers' this is in fact the last beer of the last series of 'beers of Christmas'.

It's been a long saga of festive beers. Many great memories of festive indulgences over heavy warming brews and sessions livened by festive spice. Every series for me has brought the odd two or three exceptional beers, but there was one especially memorable beer from one of my favourite brewers worldwide. It might have been the right mood and moment but hell there's loads more worth mentioning. Salutes go to Old Dairy, Williams Brothers, Mikkeller, Anchor (year on year), Wold Top, The Bruery, Hook Norton and more. It's been good.