The third Geordie beer of Christmas 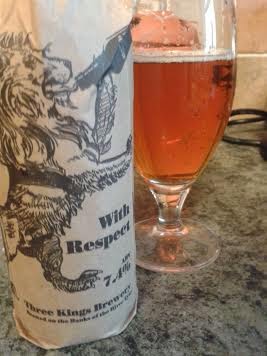 Now, Three Kings is a fairly new outfit to the local scene. Hailing from North Shields and run by the characterful, enthusiastic Ewan McCann who runs the two-and-a-half barrel plant known for its bottles wrapped in brown paper bags. A unique presentation feature.

I have not tried many Three Kings Beers and this was one was my first. It's a characterful, off-centre kind of beer and if you were to try it blind-folded you might think it's one of those crazy Belgian ales you find at bottle shops that have very vague labels. There's an imperial pale ale/Belgian ale thing going on. It's 7.4% and there's a fair dose of esters and alcohols combining with a decent dose of carbonation to give that untamed feel. A strong malt front with orange marmalade, bready banana, black pepper and an underpinning stab of blunt citrus bitterness sort of sums it up. If you find a more aged version it is a bit more refined with the signature cluster hop bitterness smoothed out a bit. All in all this is worth seeking out.

The second geordie beer of Christmas 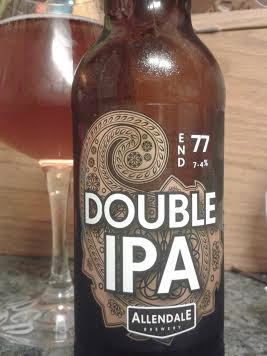 My second Geordie beer of Christmas comes from none other than the friendly folks at Allendale, or 'homies from the west side' as I sometimes call them. I have blogged about Allendale before here and will note that this beer is part of Allendale's END range. An exclusive range of limited run specials brain child of head brewer Neil Thomas, a quiet down to earth sort of character who keeps a low profile. Successor to company owner Tom Hick, Neil has produced some of the finest beers to come out of the region and has brought Allendale multiple awards with his generally concise, creative yet straight forward style of brewing.

Double IPA is a prime example of Allendale's brewing prowess. All orange blossom and pine to the nose. The palate is bold and balanced. Pithy citrus, mango and smooth pine over a medium bodied malt backbone. There's enough weight to it to balance out the hops with a hint of booze to remind you of the 7.4%. Overall, unlike many other Double IPA's this beer is about balance, approachability and the harmonious use of hops. It's big and hoppy without being just a mouthful of noisy resiny bitterness. All in all this is a great beer.
Posted by Rob at 17:02 4 comments:

The first geordie beer of Christmas

Mordue Brewery Howay in a Manger 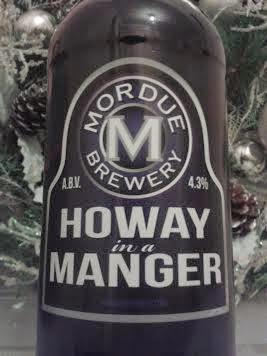 You could call this a repeat entry. But because this was on last year's 'Beers of Christmas' doesn't mean this can't open this year's 'Geordie beers of Christmas'. As you have probably guessed I have changed the concept slightly this year. Only beers local to the North East will be featured, not all of them seasonal.

Obviously this makes things a bit harder beer-hunting wise and, obviously, I have doubts on being able to pull out my dream line-up of beers. Certain restrictions, such as the more limited spare time I have these days and trying to get in the right place at the right time, come into play. But the twelve Geordie beers of Christmas is about the diversity of the local scene. It's the scene I (in a sense) grew up on, the scene I know the best, I'm most passionate about and the scene from which Rob's Beer Quest has evolved.

Here at Mordue we have often been given the label of 'stalwarts' of the local scene. An early pioneer of the 'real ale revolution', the Wallsend-based Mordue Brewery grafted through the ages, its name becoming synomous with Geordie-themed pump clips and the two Fawson brothers taking the champion beer of Britain award.

Nearly twenty years on and the focus hasn't changed but things have moved on, staff, equipment, a more diverse product range and an in-house bottling machine add to the fun. Alongside numerous awards at local and national levels and a continued drive to be one the best in North East, and remain in the spotlight.

Nonetheless the first Geordie beer of Christmas is a seasonal that's been a round a good number of years. Howay in a Manger is a 4.3% amber-hued ale featuring Amarillo and Styrian golding hops. A simple beer with a habit of outselling its predicted demand (which often leads to a short period of panic before an emergency batch is dealt with at short notice).

Pleasant sweet almond, caramelised malt and subtle, lingering citric notes bring a nice drinkability to it. As I said last year, Howay buy a bottle! Buy a case! Howay try it down the pub as well!
Posted by Rob at 21:43 4 comments:

Kent holiday. Craft beer calling and all that.

As you may have guessed, I've been on holiday. To Kent of all places. Home of British hops, picturesque villages, lots of southerners like Mark Dredge (originally) and the in-laws. Kent also has some cool towns like Whistable (with its Oysters and hidden beer shop) and Canterbury. Canterbury is a bit like York with wider streets and has an awesome brew pub called The Foundry, home of Canterbury Brewery.


In many ways Kent is a bit like Northumberland with its endless countryside but a bit more tame and sophisticated. Staying in a converted Oast house was a welcome novelty feature. Lots of time at the coast and with family. Although at one point I found myself doing battle with a hornet in the living room using a rolled up magazine.  My Gadd's Green hop as the sun sets more than out weighed this negative. Another highlight was this beer. 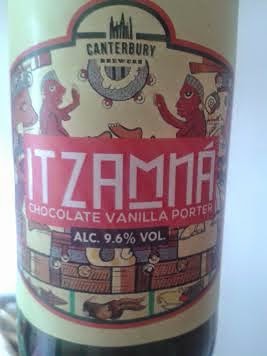 Itzamna Chocolate and Vanilla Porter at 9.6% was nothing short of outstanding on keg at The Foundry. A big oily voluptuous bear hug of chocolate, fruits and alcohol made it the stand out beer of the holiday. Nonetheless, all things come to an end and the bad news was the end of the holiday would overlap with the first two days of Newcastle's first ever Craft Beer Calling. A festival featuring countless keg and cask local and worldwide beers alongside street food. I for one was happy to hear that Panda Frog Dartfrog-48 Dunkel Rye Weizen sold out in three hours and was one of the first to go. Even Melissa Cole tried it.

I was surprised to see a full row beer lines available. Unlike your regular beer fest the lines seemed ever changing and didn't just run out leaving a turned pump clip. This is great but I got the impression that the day 1 and Saturday night people probably got the best deal with so much turn over and lines running out and being replaced. I missed a lot of good ones but the combination we got was no let down. Allendale's Export Stout was a must with its depth and roast malt bite. Along with this, Tyne Bank Heavenly Porter, Northern Alchemy lemon and vanilla porter and a couple of good ones from Bad Seed brewery were to name a few.

It was around 2pm when a few of us brewing types got hauled upstairs for a meet the brewer's like discussion on beer and the market. This interview was conducted by Matt from Wylam, and the discussion was manly about the meaning of craft beer and the shape of the market and where it's going. Although I didn't say much it was great to hear the input from the others on how they see things.

So all in all it was a great festival, and great to hang out with brewing folk which gives you the opportunity to talk almost exclusively about beer for great lengths of time. From what I hear Craft Beer Calling is due to make a return next year. Next time I would hope to experience more of it.