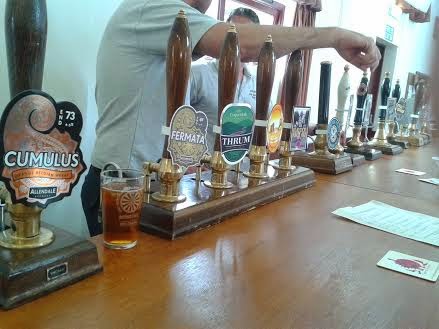 Here's an event we had to go back to. Northumberland Beer Festival is based in Longframlington Memorial Hall and run by the Coquetdale Round Table. Last year the festival opened its doors for the first time as a small affair driven by community spirit. This year it seemed the aim was to raise the game and double the beer range.

But wait, this wasn't just a bigger beer range, this was a fine selection of the region's beers with various new beers on offer. Starting things off I had Allendale Fermata, a 3.1% citra-hopped table beer that's made its name on the local scene. It sure goes down easily. Light malt base, citrus and melon overtones, and a light finish of more resonating citric hops. Sticking with Allendale, the slightly peculiar Belgian wit Cumulus sure hit the mark. A little like the excellent Allendale Weizen but with a big hit of raw, zesty, orange peel at the forefront. But then in the same off-centred wheat beer ballpark, Anarchy Grin and Bare it surprised as an impressive display of contemporary brewing. Soft-bodied orange and bubblegum yeasty fullness meets bold resiny hops. This beer was first released as a 2013 Newcastle Beer Festival battle of the beers entrant. Back then it seemed noisy, complicated and without a clear direction but now it seems Anarchy have made the concept work.

Some nice session blonde ales filled out the range like Wylam Magick and Mordue Summer Tyne then we meet Five Towns Strange Brew. A big burly 7% IPA that featured soft, floral, melon-like tones with a brisk, brooding bitterness. Not entirely that strange but a little odd selection of hops I'm thinking. But hey you don't always need odd-ball new wave beers to steal the moment and from what I was told my Mordue Panda Frog Project Endangered Species was well received. As a 6% strong mild it was designed to be a big, dark, characterful old school beer. Also holding the line of the dark and traditional was Cullercoat's Polly Donkin Oatmeal Stout,.a smooth velvety chocolate led affair backed by blackberry fruit and prickly English hops that develop in the finish. 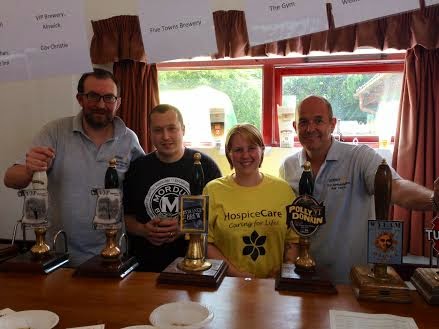 Me and the bar staff (showmon) 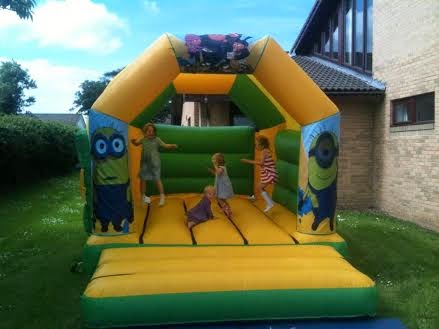 After the sixteenth half this was a hell of a lot of fun. The bairn seemed to like it to. 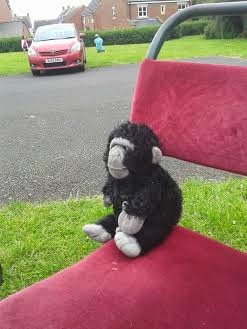 Garry the militant militia guerrilla joined us for a short period


So overall a great day was had by all and various great beers were tried. I will certainly be looking forward to a re-visit next year.
Posted by Rob at 21:28 5 comments:

The Return of Pandamonium 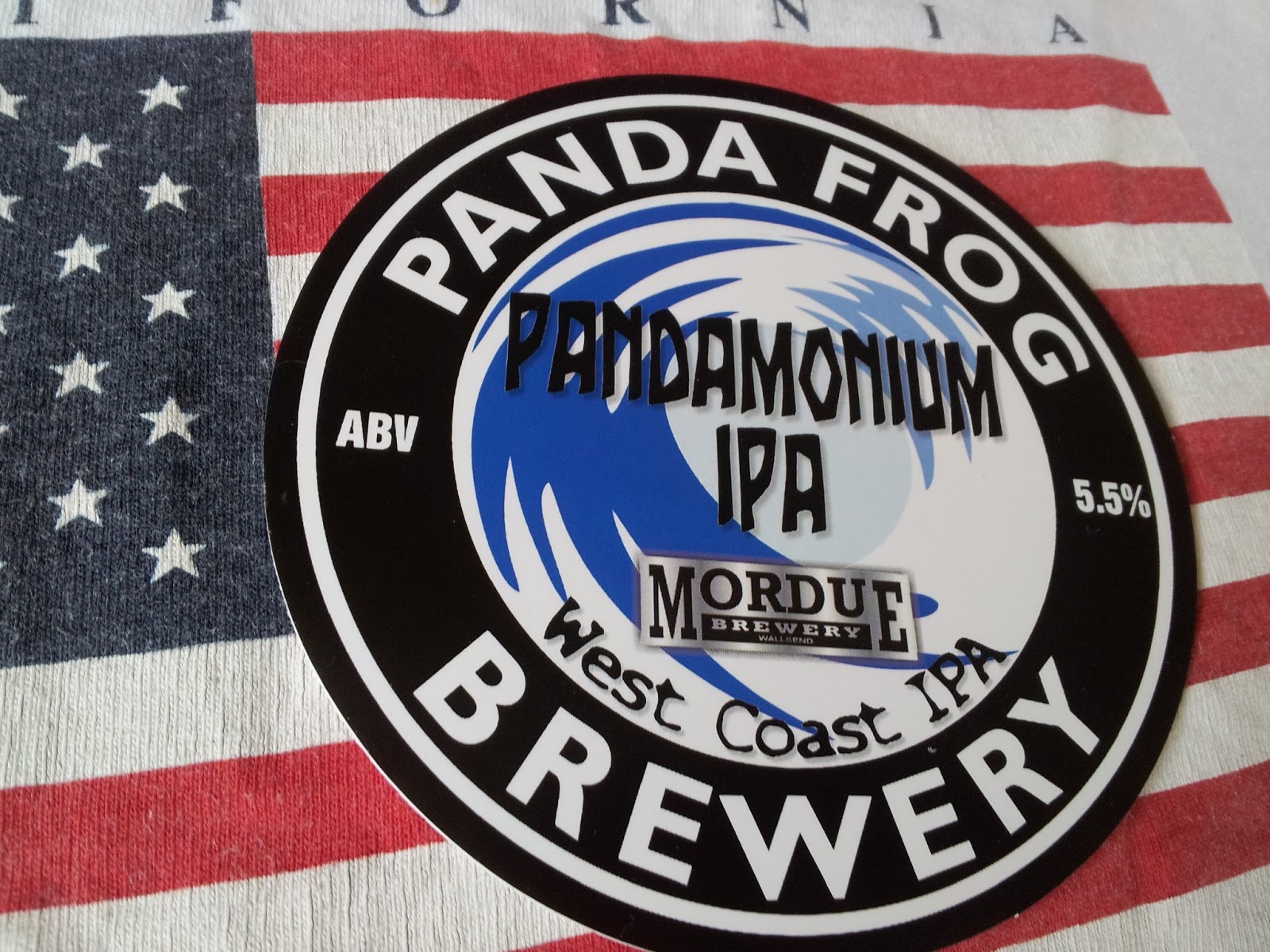 That's right. The west coast-style IPA from last year is back by popular demand. Which is officially the first time in Panda Frog history that this has ever happened. For those unfamiliar, the 2013 summer release Pandamonium is more or less a total turn around from the last Panda Frog Endangered Species. It's pale golden and brutally hopped with US hops. The inspiration for this one was basically to brew my dream IPA, and although I've often craved brewing British IPAs I (back in 2012) ended up falling for the idea of my dream Californian-style interpretation. 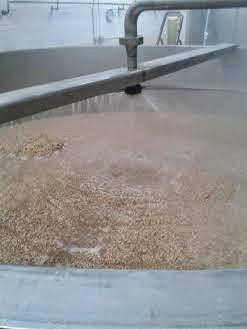 The thing is back in the day Panda Frog beers have always been brewed on the 10 barrel scale (like a half batch), a proportion was kegged and bottled and the few casks remaining were of an exclusive nature. Recently however there has been a push for (wherever possible i.e. the mash tun won't overflow) to brew all Panda Frog brews as full twenty barrel batches. With Pandamonium our mash tun wasn't overflowing (5.5%) but the copper got a pounding. Pandamonium carries the heaviest hops per barrel ratio ever used in a single batch in company history. Even more hops per barrel than 2013's Operation Red Thunder (you big burly red 6.8% thing). So thanks goes to Charles Farham for allowing us that hop contact extension. 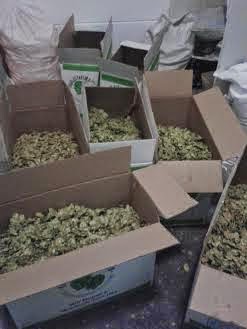 Later in the day we had a special visit. A visit from the big Pandamonium fan from 2013, it was none other than North East's Twitterati elite legend Gary A.K.A @TheAleTrail. He added the post-boil hops and asked various questions. 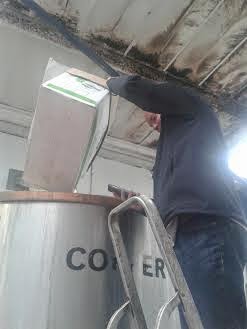 The Ale Trail on the copper. He wouldn't be twitterati if he wasn't distracted by his phone.
The Ale Trail came back a couple of weeks later for some sampling and even brought a few beers from London. He's a splendid chap, and we won't forget him from his stint on US television handing out a bottle of Workie Ticket. 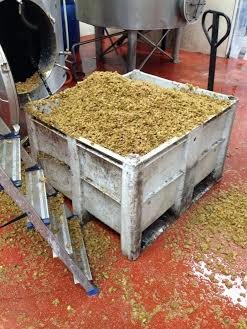 End of the day copper dig out; this was very, very sweaty and not pleasant hacking through layer upon layer of hops each holding wave upon wave of heat. In future may consider subbing in some pellets

So be on the lookout for Pandamonium in cask keg and bottled forms. Like last year I bloody loved brewing this one.
Posted by Rob at 21:28 4 comments:


So, does beer and metal music really mix? That's a question I pondered over often during my university days. Back in the day many of my metal head mates were happy to settle on drinking anything with alcohol in it, and let's face it, trying to enjoy great beer whilst in a mosh pit has its practical difficulties.

Trillians Rock Bar has always been a well reputed venue amongst the region's metal fans. The dark, underground venue has played host to an almost endless number of great metal bands from Nile to Napalm Death. But it's never had a credible beer range. That is prior to last Friday when four Mordue hand-pulled ales were launched as a permanent fixture to the venue. I was also pleased that they managed to serve them well, and various leather wearing tattooed people gave myself and the Mordue crew good feedback on how they thought it was a good move by the venue.

From the side-lines it was almost like watching market evolution in progress. Metal fans drinking cask ale. I was already confident that the concept would work, as many metal fans seem like decent folk who like good beer, but end up just tolerating whatever tosh rock venues offer them beverage wise. But I can see the potential market here, and hopefully good beer will continue to thrive in Trillians and other Rock Themed venues.
Posted by Rob at 20:39 7 comments: