As I’m sure you’re all aware, the nights colder and longer winter is setting in. For this reason every year I decide to make a few visits to my favorite beer shop the ale cellar in Darlington, a humble corner shop like outlet with walls filled with beer and glassware from around the world. Here I usually spend great lengths of time scoping the selection picking out both well known classics and beers not tried yet whilst trying not to spend too much money. In fact of recent times the Ale Cellar has got even better, bringing in superb beers for both Meantime and Samuel Smiths, check it out on http://www.alecellar.com/, you can even order online.
Anyway as my very own home brewed ‘Panda’s Christmas reserve’ ale is slowly maturing, I hunt for more examples of great winter beers to help celebrate the season. Obvious ones like Fullers ESB and Black sheep Riggwelter are easy to find and great full bodied winter warmers but various other gems can be found outside the supermarket range such as Sierra Nevada Celebration, a Trappistes Rochefort or perhaps a Daleside Morocco Ale. But what is it I question that makes a great winter ale? Must it be dark and full bodied? Heavily spiced? In fact some Christmas beers such as Wylam breweries legless Santa have been quite pale. So definitions are quite broad with some beers marrying well with the season naturally without being designed as Christmas beers.Melissa Cole reviews in the recent edition of Beers of the world covers some good ones. I myself will be looking for some new releases with the little budget I have available.
Posted by Rob at 15:26 8 comments:

I'm sure that all beer fans out there would have seen the debut episode of Neil Morrisseys Risky business mentioned in my previous post. Yes, I thought, eventually a program to raise awareness and respect for real beer, and I suppose it does. However some areas were disappointing (as a CAMRA member it is my duty to moan). Firstly were the gimmicks, I mean who has bath in beer!? Its just a waist of good beer. Secondly what is the point in getting some guy who's known for drinking beer in quantity and speed alone as a taste advocate. At this point in the show I was questioning weather they had lost the plot in favour of just trying to give the show a laddish persona? Furthermore no real brewer would simply homebrew up a test batch on a 5 gallon home brew system before asking members of the public if they liked the free samples. They obviously have no ideas of the unpredictability’s of home brewing compared to commercial brewing.

Apart from these points I admired their passion to succeed, and it was only the other day I managed to find a bottle of Morrissey fox blonde ale on the supermarket shelves. From my sources I have heard these blokes have been using some pretty nice brewing kit, under supervision from staff of Roosters Brewery in North Yorkshire. This explained why the beer itself was very much on the bitter side especially in the finish. Very pale in colour It opens well, clean and balanced with soft malt presenting apple and peardrop, before the finish brings mouth puckering bitterness and dry hop resins that bring almost a touch of astringency. Interesting beer though, from my guess very simple in design, which isn’t a bad thing, but my parents didn’t like it much. Overall I would recommend it to fans of dry German pilsners. 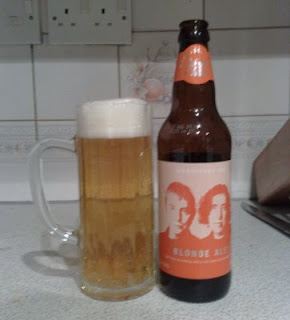