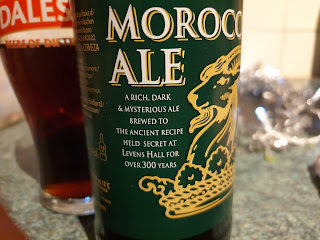 Morocco Ale is a beautiful way to sink into Christmas eve. Like liquid ginger cake in a glass it is a 5.5%, rich russet amber and arguably one of the most festive beers in the world, that isn't a seasonally released beer. Aside from timeless classics, Christmas eve in this household is traditionally the night for cheese. This year it would be mostly Yorkshire cheeses and the headline beer for the cheeseboard job was Sam Smith's Yorkshire Stingo. A big boozy 8% heavy weight with lots of dried fruit and subtle oak, it did a fair job as an all round cheese board complement. 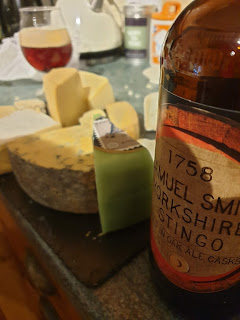 A bigger highlight was the pairing of Daleside Blonde with traditional Wensleydale. Floral citrus top notes and subtle carbonation lift into it beautifully whilst the smooth malt backbone finds an intricate union with Wensleydale's mild creaminess. By far the best beer match for Wensleydale I have ever come across in its cask-conditioned form. Another local offering, Harrogate Blue, is a bold creamy rich blue cheese and a great pairing for Daleside Monkey Wrench with its big boozy caramel malts that just wrap around it. Doesn't that sound beautiful? Actually I'll answer that question, it would be very beautiful. 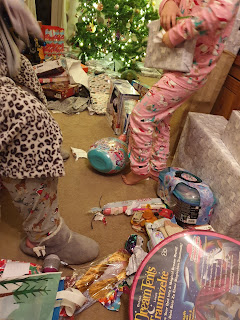 That aside Christmas day as usual was wrapping paper carnage everywhere. Again this year we had some good presents. Susie got her keyboard and Harvey got his Bat-bot and Black Panther costume. Thus meaning he now has virtually every super hero costume in the book. Except maybe Ant Man, Burnt Face Man and Ben Stokes. I got a gun that fires bottle caps. 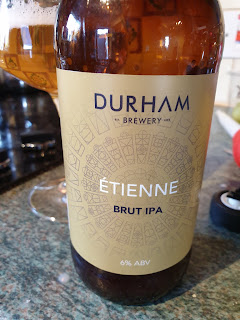 Durham Etienne Brut IPA is a great pre-Christmas dinner appetiser. It's dry and quaffable for its 6% abv and all peaches and pears. A really lovely beer with some Belgian influence though not as aggressively hoppy as some takes on the style. Admittedly I did vow to drink Santa's Progress with Christmas dinner this year but went with Daleside Greengrass Old Rogue Ale instead. In my recollection of beer blogging, the subject of pairing beer with Christmas dinner has never really been pinned down. It's not worth overthinking.


Overall our first Christmas in Harrogate went rather well. Unlike the old days when Christmas was more an extended celebration of Belgian strong ales served in elaborate glassware followed by passing out in front of Wallace and Gromit. This year was a great family experience, which also featured beer. 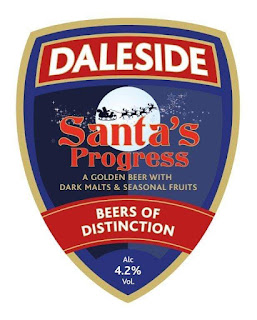 Alas the winter season is upon us once again. Here at Daleside we've been brewing our long-running Christmas seasonal Santa's Progress in significant volumes for departure across the nation. Like the name suggests Santa's Progress is brewed with Progress hops-  an English variety that come across like a fuggles but with more roundness. It's a rich, golden, 4.2% ale featuring herbal blackcurrant over fruity malt. It's an old school Christmas seasonal demonstrating beauty in simplicity so to speak, and is a joy to brew.

I have reviewed and discussed Christmas beers multiple times before on Rob's Beer Quest. There doesn't seem to be any rules on what counts as a Christmas beer. Santa's Progress was the first I had the privilege of brewing at a commercial level. At 4.2% it was quite different from the 7-8% Belgian style spiced seasonals I used to brew on the old home brew kit.


I always found Daleside brewery has a different ambiance in the winter. For a start its a trifle bit cold. But our friends the yeast still ferment away lovingly nurtured by added heating. Then on the upside the cooling works that tad bit quicker.

But overall there's been a lot to think about this Christmas. Our January seasonal Key-lime Wheat has been brewed on the trial kit and made a pre-debut at the Disappearing Chin in Harrogate. It's also the time to get out and party hard (or just go out drinking). Then there's all the present to sort then wrap. With the bairns getting older the expectations are higher. They know Santa pays up so the pressure is on... On Santa that is. I'm sure it'll be a blast. But to revive tradition this year I will be hoping to get hold of a mini-cask of sort of the old Santa's Progress to pound pints throughout Christmas day festivities.


Just the other week we managed to make it back to Alnwick to visit old friends. It wasn't a bad venture with plenty going on at the time. First in line was the Christmas lights switch on where we managed to bump into lots of old parent friends, and recognised lots of old faces. We didn't sit it out for the annual steady arrival of Santa into the market square though.

Alnwick, as always is Alnwick. There's no other way to describe it. It hasn't changed much apart from a big shopping centre development featuring Starbucks on the way in. 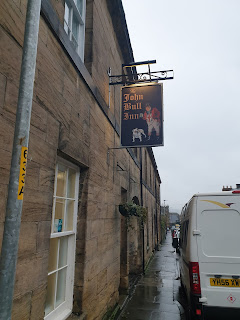 Anyhow I brought along some plastic sample bottles of Vermont Black IPA and the January seasonal (brewed on trial brew kit) for our mates Tony and Fiona to try. They went down well. We also visited the John Bull which is now changing hands again as the previous owner Gus is taking it back from Hadrian and Border Brewery. So we popped in to have some Porter from Hadrian and Border and Titanic Plum Porter Grand Reserve at 6.5%. Quite clean, boozy and better than the original, though I was never a fan of the original. 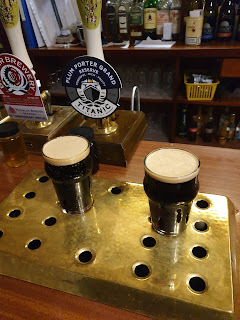 All in all it was great to see everyone and the venture ended at Alnwick working men's club drinking Sam Smith's Sovereign bitter on keg. Sort of like an upgraded Boddingtons though cheap as chips. A splendid weekend.