That's right, after victories at Darligton and Alnwick beer festivals, Mordue's Northumbrian Blonde has now gained a silver in the SIBA North competition. 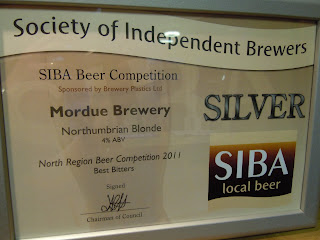 Fun to brew, fun to drink and a great all round session blonde ale. It has been a privilege to be part of the beer's development. See the rest of the winners here, and don't forget to check out Mordue IPA at the Free Trade Inn, Newcastle this week, served exclusively in keg form for the first time ever.

And not to pimp up the pump clip... 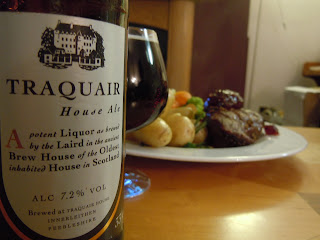 Traquair House Ale is one of those classic Scottish ales you instantly fall for then end up not seeing for a good length of time. It's also one of those beers you don't see mentioned on beer blogs often. Nowadays most are too fixated by the more modern hop-forward beer styles to give time to old classics like this.

The first thing you notice about House ale, besides its appearance is its dark fruit and sweet caramel like character. Lots of malt presence, warming alcohols but not as heavy bodied as you would think. With venison it's fantastic. I loved the way the robust dark malts found harmony with the gritty textures of the meat and the caramelised sweetness from the beer just seems to mellow everything out.

The venison was marinated in lemon infused rapseed oil, crushed garlic and fresh rosemary and was served with redcurrant sauce. Overall an awesome synphony of flavours that was mainly put together by my lovely wife Helen. Without her in my life my diet would be restricted to waffles, baked beans, oven chips, random stir fries and omelettes that fall to pieces after a few minites in the pan. Cheers Helen. 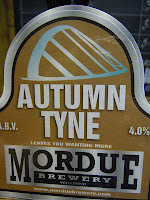 Autumn is my favourite season. It hasn't always been, but a while back I just decided it was. A similar thing happened when I was about eight years old when after long periods of thought I decided my favourite colour was green (the trendy kids always liked red or blue). But overall summer is nice, winter has it's strong points and spring is just boring. But autumn is a great season, and the seasonal beers it brings range from brown ales to nutty auburn-hued bitters to the elusive pumpkin ales.

This autumn has been a nice enough. Plenty of brewing and planning new projects. I also managed to get the old Panda & Frog home brew kit back in action. After not brewing on my kit for such a long time I was very eager to get mashing. This time the brew in question was a collaboration between myself and Mordue brewery's brewery wing man Dave Kerr. Bear Hug is a 4% golden ale brewed with naked oats and honey. A nice easy batch to get things going again. 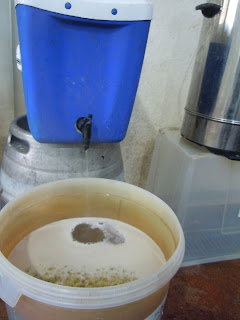 But there's more to life than brewing, at some point you have to dedicate some time to drinking the stuff. So while the Bear Hug ferments it was time to get into the first of my colder weather beers. Port Brewing's Old Viscosity is a 10% imperial stout with a big mocha chocolate aroma and a rich, assertive palate of dark chocolate, raisins and some vinous fruit. The hop bitterness is firm and backs everything up before plenty of heavy alcohols and berry fruit warm the finish. 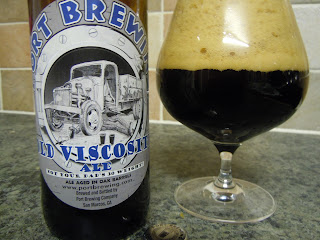 So a pretty intense beer. I would advise drinking this with medium to full bodied cigars. A solid winter warmer. Its a shame I can't get hold of another bottle.
Posted by Rob at 19:03 8 comments:

After ringing up the various Wetherspoons pubs of Newcastle, re-ringing them up and trailing round them all on a Saturday night we finally found some Mordue Red Rye Riwaka on cask. The honour goes to the Job Bulman of Gosforth after a tip off from the boss man Gary Fawson. Mind going straight from work I got a few odd looks walking in to the pub half wet covered in malt dust and yeast stains but it had to be done if I was to get it before the festival ended.
It seems as though the approach of rotating all the listed beers randomly has been taken instead of the traditional 'put everything on at once' approach. This is probably more practical for the pubs involved but not ideal for your average beer geek excited about trying certain beers. But during my time hunting the elusive Riwaka some interesting beers were found. For a start Bell's Kalamazoon Black Silk was pretty unique, like a cross between a dark mild, an Oatmeal stout and a chocolate milkshake. Moorhouse's Pendle Porter showed the weird effect of using Green Bullet hops in porter and St Peter's Golden ale was straight forward and delicious.

As for the Red Rye Riwaka I found the thai spice, leafy hops and red fruit notes a little more dominant and the body a little less smooth than the sample I had tried previously from the Free Trade Inn, Newcastle (a non wetherspoons pub that took on one of the left over Riwaka casks). Overall I was quite pleased. Sadly I didn't get to try many more and soon enough it will be time to say goodbye to Red Rye Riwaka and hello to the few more projects at Mordue I have up my sleeve. But I won't mention that just yet.
Posted by Rob at 20:03 4 comments: Ahh smokey, haggis and chips, straight from the fish and chip shop. A meal fit for a king. But before some of you think I'm going all Cooking Lager on your ass your wrong, Asahi  Black is a beer I consider respectible. A smooth chocolaty malt driven dark lager.  First discovered by myself at a Chinese restaurant (and not many have it) it's smooth...

With the smokey and haggis it's peculiar. The malt picks up on the sausage and texture of the haggis ok but the acidity of the vinegar on the chips spoils it a bit. Then throw in a load of different sauces and you can't tell where this is all going. To be honest, this beer was better served with Chinese food.