The second beer of Christmas 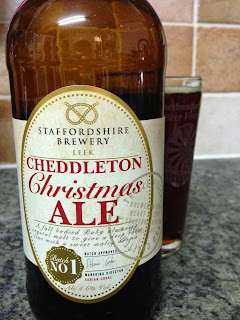 Coming in at number two is this deep, ruby-hued, 4.6% festive ale obtained from a farm shop way down south. For some reason the brewery likes to emphasise on the bottle that the beer is triple filtered (as if it's a good thing) yet the product doesn't suffer from it so much. This one opens up malt heavy with sweet toffee apple meeting prickly winter spice and bitter English hops and liquorish. Slightly bittersweet, rich but with an ashy dryness that's almost astringent in the finish. Not a bad seasonal beer at all.
Posted by Rob at 20:39 No comments:

The first beer of Christmas 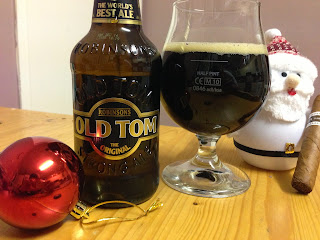 Behold the fourth consecutive year of Rob's Beer Quest's annual twelve beers of Christmas. Opening things up we have reliable classic with a cigar (much like the first first beer of Christmas way back in 2010). We've had some memorable entries over the years. You could now call them the thirty six beers of Christmas. But this year I will be trying to avoid last year's approach of 'the twelve supermarket (3 for £5, quid a bottle or any neckable grog I can find) beers of Christmas.  As least to some extent anyway.

You could probably call Old Tom A benchmark UK brewed Old or Stock ale of the modern era. As recently as 2009 the World Beer Awards 2009 gave this beer the prestigious award of 'world's best ale'. I remember participating in the judging from home via beers sent from Beers of the World Magazine. I scored it highly.

When it was announced I remember thinking; World's best ale? Really? Good beer but.... Really? Besides, I honestly don't believe any beer could hold such a status.

Anyway where was I, o yes Old Tom the first beer of Christmas. I would probably recommend this as a go-to winter warmer, dark and strong it's all figs and fruit cake. Mature fruit meets sweet muscovado sugar in the finish with warming alcohols. A beer with plenty of depth and an old-school feel. It becomes obvious why it wins awards, plenty going on and difficult to fault.
Posted by Rob at 15:01 No comments:

So after getting back from my holiday it appears that I have missed another good attempt to define craft beer. Ed's Beer Site lays down the straight forward approach for those less familiar with beer on how to pick out what's craft and what's not.

According to Ed, if grapefruit is the flavour the beer is obviously 'craft'. This may cover a lot of territory but there's a lot more to craft beer than this. To fall into the craft beer category the craft brewer must be seen as a craft brewer via some or all of the following means;

OK so once you've followed most if not all of these steps you can state as M.D of 'Rebel Dog Craft brew' that you're the soul point of difference in the UK brewing industry. Second to this your products offer an oasis of hop-driven nectars amongst the ocean of boring brown bitters and insipid mass market lagers. Remember to act relatively oblivious that the marketing and business model has been copied many, many times in the endless cycles of beer fans picking up the mash shovels in a 'we wanna be cool like those guys' kind of champagne.

But don't get me wrong, I have nothing against big hoppy IPAs, Black IPAs, Imperial black rye Saisons or any of the brewers who produce much of the most progressive, interesting and excellent quality beers in the country. Furthermore brewers copying ideas from other brewers is hardly a new thing. Cast your mind back ten to twenty years or so you'll remember the ubiquitous droves of small independent brewers churning out session bitters and blonde ales galore. Back then calling yourself traditional was cool and being adventurous involved brewing something darker and/or stronger than 5%.

I am merely pointing out that many brewers have a tendency to follow each other. Think of it a little like the social groups of the school playground. The geeky kids hang together the same way the sporty kids occupy their own space on the playground. The 'craft' types warm to each other the same way the regional or the 80s/90s micro upstarts warm to each other. Different opinions and different views on what makes great beer. Does forcibly cramming as many ingredients into a batch of beer make it any better? Does it matter if your entire product range is dosed up with crystal malt and English hops? This is entirely subjective.