It's been one hell of a year for Rob's Beer Quest. You might not think it, given the mediocre number of blog posts I've managed to put out this year but besides that it has been monumental and arguably one of the best years of my life. To open things up in spring X2 (squared) won battle of beers at Newcastle beer fest, and was not expected. Following this we had Killswitch 51 and IPA with SIBA awards prior to what was obviously the highlight of the year. 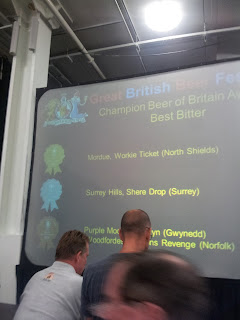 Huddling with the masses around the stage at London Olympia as Roger Protz role-called the winners. Best bitters, "with the gold, those stalwarts from the North East Mordue Brewery Workie Ticket". A monumental day, and if that didn't top things off we even got two Golden Pint award mentions here and here nearer the end of the year.

But hell, 2013 wasn't just about awards. It was the year I realised I won't be a twenty something year old for much longer (scary). My baby girl, Susie, took her first steps (game changing, like in Jurassic Park when the Velociraptors learned how to open doors). Plans were made, lessons were learned, cool people were met. There was no shortage of brewing action and our new apprentice Josh played an integral role during September's 'Operation Black Beaver Storm', involving colossus order of Oatmeal Stout for the Spoons Octoberfest.

Although in many ways it was much like any other year, but for me it was a year to remember.

The eleventh beer of Christmas 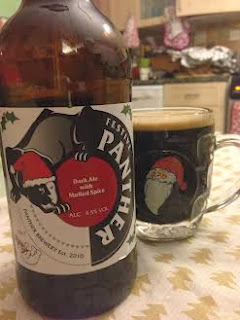 From Norfolk-based, 2010 upstarts, Panther Brewery comes this 4.5% dark ale with mulled spice. It's bottled conditioned also, giving you a yeasty woody tang that's almost Belgian dark strong ale but without the alcohol. Prickly mulled spice, liquorice and dark chocolate are the highlights here and there seems to be a lot of bitter, yeast and spice going on over the darker grains. Overall a full flavoured beer with a bit of a bite to it.
Posted by Rob at 19:04 4 comments:

The tenth beer of Christmas 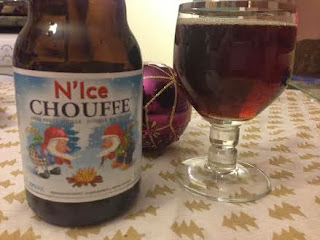 It's a big sweet centred, simple natured 10% Belgian strong ale and it's one of the highlights of this years series. Fruity warming almond like notes, rounded malts and subtle spice throughout make this all in all a very approachable and lovely beer. Excellent stuff.
Posted by Rob at 23:37 4 comments:

The ninth beer of Christmas 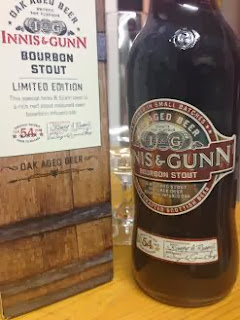 This one raised some intrigue. Innis & Gunn branching out into stout hey? Word was out earlier this year about their take on an IPA. Word was also out that it was awful, and I can see why that wouldn't work. It just wouldn't. I mean imagine someone playing out tracks from Cannibal Corpse's Tomb of the Mutilated... on the pan pipes. It just wouldn't work.

The truth is I don't mind Innis & Gunn beers at all. In the right mood and moment they can be quite special, my only critique being that they do get a bit repetitive across the board. Sweet with spirit like alcohols and an overall viscous feel is way they usually go and this beer follows suit.  It also has some added peppery spice from crystal rye malt contrasting sweet plain chocolate and vanilla. Warming bourbon spirit like alcohols dominate throughout.
Posted by Rob at 21:03 4 comments:

The eighth beer of Christmas 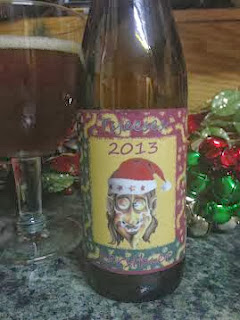 A peculiar looking bottle label for the mighty 10% Belgian monster of a Christmas beer from the much respected brewers from De Struise. Did I say monster? Such a strong term for such a lovely beer. Tsjeeses meets the drinker like a warm bear hug of warming sweet spice, malt and creamy yeast. Deeper still we have mixed berries, leafy hops, brown sugar, caramel and plum. Incredibly drinkable for such high abv, you could call it a bold display of subtlety from a beer that isn't so much instantly likeably but gets better as you drink your way down the glass. Top class Belgian seasonal.
Posted by Rob at 06:00 4 comments:

The seveth beer of Christmas 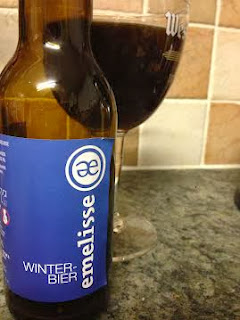 Never had anything from this brewery before so this should be interesting. A Dutch-brewed Belgian style quadruple/strong ale in short. A big boozy Belgian like thing full of dark candy sugar, alcohols and malt is what I was expecting. But at 9% it's certainly drinkable for the style. Prunes, apricot and peach fruits are at the fore with boozy candy sugar and caramel. Carbonation is on the low side so the finish is noticeably sweet fruit cake and yeasty notes. .  ﻿
﻿
Posted by Rob at 18:00 4 comments:

The sixth beer of Christmas 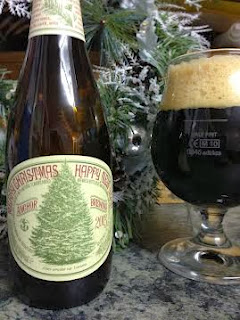 Makes it in the line-up every year it seems, and every year its a little different. This year's offering is a little on the dry side. Medium light in body featuring ginger, Christmas spice, liquorice, coffee and fruit cake before a pine like dryness coats the mouth. A good one to seek out. Always loved Anchor, stylish bottles, old school labels and good honest products.      ﻿
Posted by Rob at 20:42 5 comments:

The fifth beer of Christmas 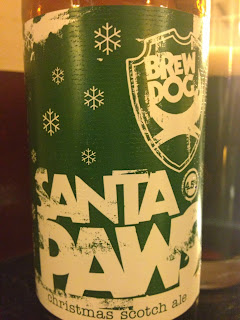 Christmas Scotch ale infused with heather honey is what the bottle says, and at 4.5% you could probably call it a session Scotch ale. It's deep mahogany, almost porter coloured and dominated by robust stone fruits, dry heather and resiny hops with a central sweetness. It has a rough and ready sort of feel about it and finish has that typical Brew Dog dry bitterness and no sticky sweet malt heaviness usually associated with the style.
All round this is a good drinkable characterful stuff, and an interesting take on festive beer. If you like your Christmas beer on the more angry side and less malty-spicy/cuddly this is an obvious choice.     ﻿
Posted by Rob at 19:59 4 comments:

Well, until now I can't say I've ever brewed a tea beer before. Makarov (named after the ex-Russian army service pistol) is a 6.4% brown ale heavily hopped with Northdown and SPALT hops before being infused with Russian Caravan Tea. This is a blended tea that features the smokey Lapsang Souchong variety.

To me all my Panda Frogs are like my children, so coming back from a weekend break after the blending to try the final version was certainly interesting. Makarov is a big cedary, woody, bulky brown ale. The tea appears in subtle nuances with smoke, pine and earthy hops over a central big almond like malt sweetness. It might not be your typical December seasonal, but I cant wait to get this bottled and home for Christmas.
Posted by Rob at 22:10 4 comments:

The fourth beer of Christmas 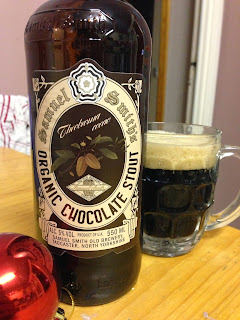 A new one from the old school Yorkshire outfit, and by no means the first Sam Smiths beer to be featured on the twelve beers of Christmas. This 5% Chocolate stout pours opaque black with an obvious nose of fresh cocoa. Its medium bodied, creamy and smooth with a predominant Cadbury's instant hot chocolate sort of flavour over underpinning roast grain and liqorish. A very tasty, instantly likeable little number but in all honesty probably not my favourite Sam Smiths Stout/Porter.

The only problem I have with it is that about half way through it started coming across a little fake, a little overdone. Hell they nailed the 'chocolate' bit on the head but somehow the 'stout' bit seems a tad lost. Like some very commercial fruit lambics it seems to grow tiringly sweet and two dimensional after a while. On the other hand if I wanted a beer to match say a chocolate cheesecake or similar this is what I would turn to.
Posted by Rob at 21:10 No comments:

The third beer of Christmas

Mordue Brewery Howay in a Manger 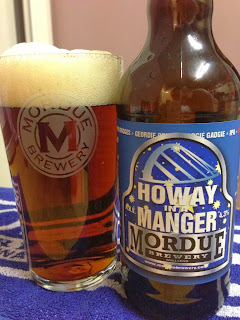 You probably guessed I'd put a Mordue one in somewhere. But wait, is that the new glass featuring the official new logo? You saw it first here on Rob's Beer Quest. This batch of 'Howay' was brought to you in part by Mordue apprentice Josh ('shamone' Josh) on one of his first brew days ever, and a splendid job he did indeed. Basically Howay is a straight to the balls Mordue classic. Straight down the middle best bitter with a citric hop influence in short. Biscuity toffee smooth malt over citric hop underpinnings. Almond hints and a finish that's bready grainy and soft. It's tasting mighty fresh, you might want to buy a bottle. Howay buy a bottle. Howwaaayyy!
Posted by Rob at 19:00 No comments: