The 3rd Beer of Christmas 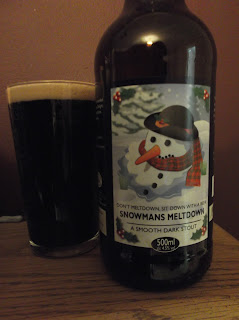 
Well, it sure is cold out. No snow just yet tho. Here's another beer from the south from a less well heard of brewery. Picked this one up from a little farm shop on the way back from a recent trip to Kent. Snowmans Meltdown is a 4.5% stout that opens with fullish sweet oily chocolate and toasty roast grain. The finish turns to coffee with a hint of liquorish and more roast grain. A nice all round stout.
Posted by Rob at 19:02 No comments: 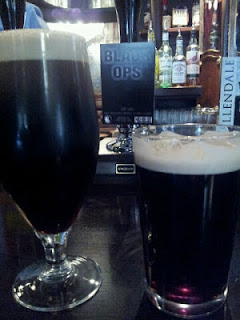 It's not all that often that I get to try the beers of Mordue on trade. At work plenty of sampling goes on but hunting the stuff down on trade is something I would like to do more of. But this week one of the fine pubs of Newcastle, Lady Grey's has decided to take some Panda Frog Black Ops in both cask and key keg form and serve them on the bar at the same time.

This certainly demanded attention (since I had never tried the key keg version), so myself and Matt decided to head down for the purposes of quality control. For those that haven't tried Black Ops, well it's kind of like a Czech style dark lager with the hops switched to heavy dosages of German and New Zealand varieties. The cask version, in short is slightly more raw and uncomprimising. Leafy resiny hops and forest fruit with soft chocolatey-coffee malt in the finish. The keg version is definitely smoother, cleaner and closer to your typical dark lager with the flavours slightly more well composed.

From its inception I knew this beer would be well suited to keg and I'm very chuffed with the results. It might be harder to find but I would definitely advise hunting it out.
Posted by Rob at 22:22 14 comments: 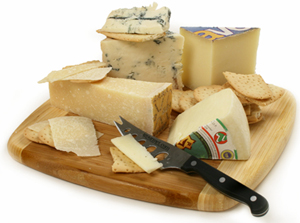 Cheese... Lovely cheese. Been a while since I blogged about it.

For me a good cheeseboard is like a little piece of heaven, and every pub or restaurant has a slightly different version of it though making your own is more fun. The number of cheeses can vary greatly. Three is the minimal number but four to seven is more ideal. More than seven and it gets a bit too much. But it's not all about the cheese, some garnish with apple chunks, others prefer grapes. Biscuits or crackers are good but not essential and chutney is always a bonus. But any great cheese board is in essence like a great football team, the elements shine individually but together provide the experience.

The quality and variety of what's on the board is crucial. I stand by that five is the perfect number of cheeses. In order of preference here's how I would choose it:

1; the blue. (absolutely loads of great ones to choose from here but when in doubt you just can't go wrong with good old stilton)

2; the hard and nutty (Gruyere, one of my weaknesses)

3; the soft, ripe and creamy (Brie or Camenbert, still undecided on a favourite).

4; the cheddar (usually but not always, and not always a strong one)

My wildcard is normally something uber pungent like a munster but it can be goat's cheese or some odd ball French creation. Then again smoked cheeses are hard to turn down also, this is why two or three wildcards are usually better.

Obviously the cheeseboard has to be served with a beverage, which for me is normally a very cheese versatile beer. Barley wines, Big Belgian's, some IPA's, general strong ales or even premium bitters can do the job. Then there's the surprisingly under-rated option of Geuze. Wine or Port will also suffice.
Posted by Rob at 20:00 8 comments:

The 2nd Beer Of Christmas 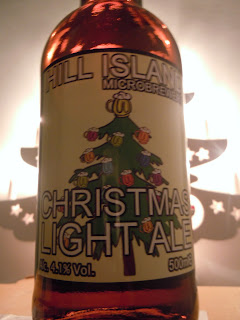 Hill Island is a nice little Durham micro that I've tried a few bottle beers from. Quite fitting to post this the same day the Alnwick Christmas lights go on.

Pours a bright pale golden straw in colour. Nice spicy herbal aromas with a grainy medium to light bodied palate. The drying finish is dominated by herbal, spicy hops. It's an easy going little number and at 4.1% probably a good one to warm up on early in the festive drinking session.
Posted by Rob at 18:19 No comments:

The 1st Beer of Christmas 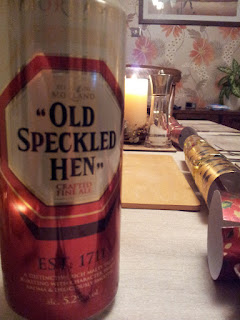 On a bit of a budget this year.

Bear with me here it gets better. Every year the twelve beers are always a bit of a challenge, this year I have a bit less time and a baby to look after. But any how, here goes.

Those that know Greene King's Old Speckled Hen will know it for its rounded sweet fruit and caramel-toffee like malt front. Interestingly here the combination of more carbonation and cold serving temperature seems to counter the syrupy sticky sweet nature of the beer. All in all nothing fancy here, but if offered one again I wouldn't turn it down.

The definition of 'Craft' Beer

You hear a lot about craft beer on beer blogs, especially when it comes down to actually defining the term. The problem I have with it is when it comes to explaining the term to people who know very little about beer. This is where I normally end up struggling to put forward the jist of what the whole evolving, thriving craft beer scene of the UK is all about.

For most beer enthusiasts, craft beer doesn't need a solid definition, they just get it. Wooly Dave did a video a while back that covers things well. We've also seen the debate on Indy Man Beer Con, which didn't really end in any conclusive definitions. The problem often seems that outside the world of beer geekism not that many people 'get it' and the term means very little if nothing at all.

To me there seems to be various perceptions of craft beer. Like the concept of it being only served on keg, or that it has to crammed with excessive quantities of pungent new world hops, or it's about putting more ingredients into a beer. Perhaps it has to be marketed a certain way with plenty of sneering at CAMRA being commonplace among the hardcore fans of craft beer elitism.

Take it or leave it, craft beer in the UK has evolved to be something quite different to the original 1980/90s blossoming craft beer scene in the US. Then again, take your average UK start up brewery that idolises and takes inspiration from the American craft beer market. They look around and feel like a fish out of water surrounded by masses of traditional 'real ale' brewers. So you can see where some of the attitudes and segregations in the UK industry have occurred. You have your 'real ale', your 'lowest common denominator' beer, fancy imported European beers then you have craft beer. Some people think the four things are completely different. Others (like me) realise there is a lot of overlap, especially between cask and craft beer.

So here at Rob's Beer Quest we have a definition. Feel free to argue with it. But to define it we have to put it in comparison to what is not craft beer. Here goes:

Craft beer originates from a brewer/collective of individuals who brews beers to certain specifications to the flavours and aromas that desire. What constitutes as great beer to them is individual to them and is what they strive to produce and wish to represent their company.

Non craft beer originates from a brewer who brews to certain specifications usually set by a managing body that dictates over operations. What constitutes as great beer to them depends entirely on what they can sell in the greatest volumes, to the widest customer base, at the cheapest production costs for the biggest profit margins. They aren't always large companies, some exist to cash in on existing markets.


Problem is, in reality the majority of products on the market take ideals from both camps. So at the end of the day craft beer really comes down to what the drinker makes of it. The definition of craft beer is of something that has no definition.
Posted by Rob at 17:55 10 comments: