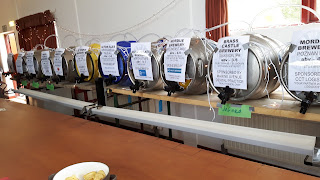 It's becoming an annual post is the Longfram beer fest post. One of the highlights the month of June has to offer. From humble beginnings I have always admired head man Andrew Findlay and the Coquetdale Round Table's efforts on it. A bouncy castle and face painting for the kids meets respectable scran and that's without mentioning the beer. 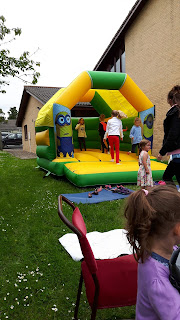 On the whole the beer range is well selected and balanced despite not being expansive. This is a pleasant change from some other beer fests that seem to overplay the same cards thinking the more session blond/bitters gives the broader the appeal. In other words it's easily possible to have twice the number of beers but half the amount of diversity and choice at the same time.

This year the first one on the hit list for me was North Utsire by Cullercoats brewery. A dark Rye influenced 4.1% bitter. Lots of bready doughy caramelised malt meets peppery Rye finish. Quite straightforward and loads of character for the abv. The two Mordue entries were also on form, Poznian Pils and Breakfast pale. Bad Seed Jester Pale was then fresh with floral summer fruit yet with an odd savory tobacco note. Out of the ordinary was Mosaic Saison by Two By Two brewery. Blueberry and fruity bubblegum with a definite Belgian yeast presence and residual sweetness. Worth a try yet a little unusual.

Brass Castle Session IPA was the final note of the evening. More fruity Mosaic Hop-esque influenced with a decent mouthfeel for 3.5%. Overall we had a splendid day, the bairn had her face painted and now thinks all beer festivals provide this.
Posted by Rob at 15:15 4 comments: