Just like the Queen song, the show must indeed go on. But I'm not complaining, overall it's been a good year for me and certainly no ordinary one. The highlights were obviously moving jobs and hunting beer in Rome. But throw in some great beers, a twissup and an awesome birthday party, one or two beer festivals and many brewing ventures and you get one hell of a year to remember.

To be more conventional I could have done a list of 'greatest beers of the year' or a 'Golden Pint awards 2011' like many others but to be honest my beer hunting this year has been a bit less rigorous. More relaxed you could say (plus I get a good amount of free beer from work). But this time last year I remember doing a slightly less optimistic post. But to say goodbye to 2011 in style I would advise you listen to this track whilst slowly scrolling down the pictures on the page. 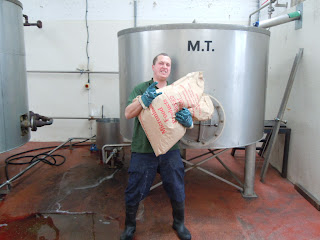 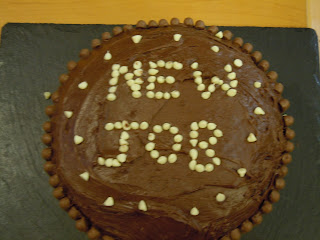 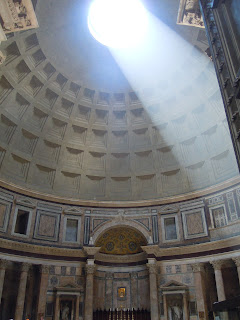 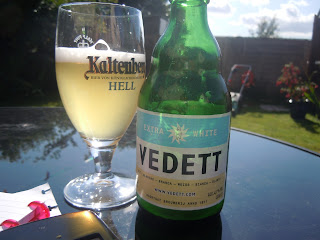 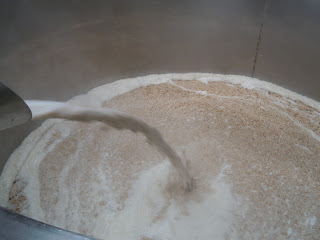 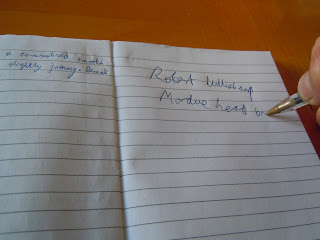 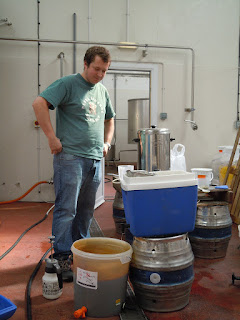 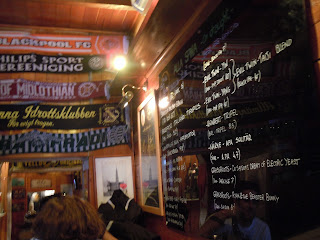 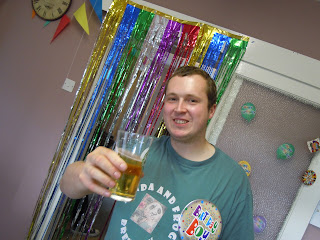 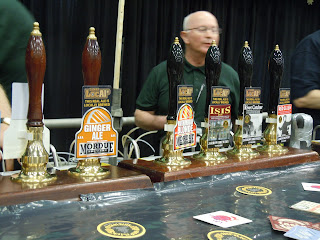 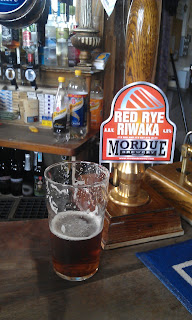 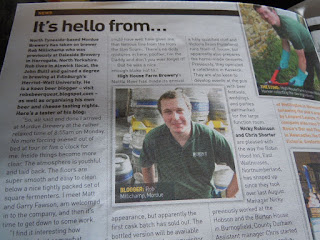 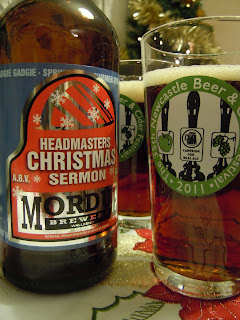 The eleventh beer of Christmas 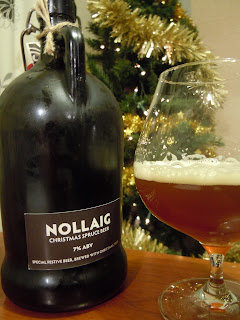 Gaelic for Christmas, Nollaig is another Williams brothers crazy invention this time incorporating hand picked spruce tips and high impact specialist hops. So kind of like a Christmas tree IPA then. It's very limited edition.

I wasn't sure what to expect from this one, but think along the lines of strong pale ale with a twist and you won't be far wrong. It's aromas bring pine and juicy lychee hop aromatics over hints of fruit cake. Drinking the stuff brings waves of cakey sweet malt and ginger bread countered by resiny pine needles, gooseberries and an underlying pithy hop bitterness. That latter of these seems to build more and more in the finish as you make your way down the bottle as hops and pine reveal themselves a bit more.

It certainly is an interesting beer and at 7% it may well have benefited from a bit of ageing. My advice is its worth seeking out as I'm not sure if the brothers will be ever brewing it again.
Posted by Rob at 14:22 5 comments:

The tenth beer of Christmas 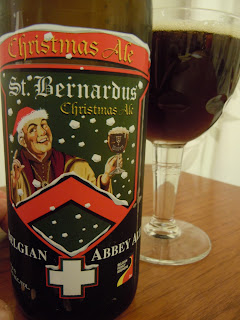 So here we are, it's Christmas day. But Christmas day wouldn't be Christmas day without a heavy dose of sugars and alcohols would it? Well that's what ths beer packs that's for sure. Sweet fruit cake, candy sugar, raisins and figs all play against a spritzy carbonation here. In the finish you get more winter fruit and sherry.
This truly is a christmas beer. But when that Co2 tires a little, and it warms it tends to mellow out and those warming alcoholic figgy raisin notes really cast a glow on everything (it is 10% after all)  then you get a subtle nutmeg and dark fruit lingering finish. Through and through its a classic Belgian﻿ seasonal and definitely worth seeking out for the season.
From Rob's Beer Quest, Merry Christmas to all.

The ninth beer of Christmas

Mikkeller From Via To (barrel aged edition) 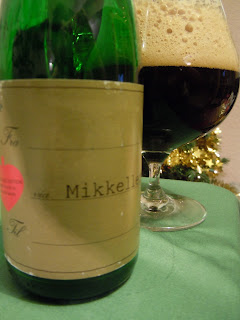 Mikkeller  are a Danish brewer I havn't tried nearly enough given how popular they are amongst beer bloggers. This 8% porter was aged for 8 months in Bourbon barrels. Pours a deep black with a big brown head. The aromas strangely resemble much of the stuff I've given the Elizabeth treatment in my past home brewings (really dry raw woody notes) but with dry cocoa powder, alcohols and hints of citric hops.

This then rolls over into the taste which kind of has a chalky feel to it. Wood, cocoa, big drying fruits, salty notes and dark chocolate lead into big resiny hops struggling to come through in a drying finish that holds a hefty dose of warming fruity alcohols. Overall its damn distinctive, bold and although not instantly lovable it does grows on you to the point that you wish you had a second bottle.

I do love Christmas Eve, probably the ultimate evening to drink specially reserved beers at home before bed. O my present pile looks pretty good this year, and I've already got tucked into some of the stilton. To all RBQ readers, have a good christmas.
Posted by Rob at 19:31 4 comments:

The eighth beer of Christmas 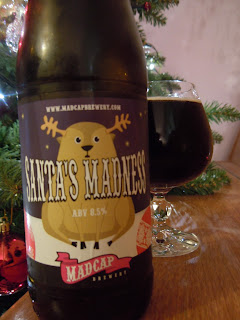 It was a while back now when I covered some of the Madcap range. Since then they've expanded to a five barrel plant and gained a range of cask ales (bless). ﻿Unlike previous reviews I would have to say this has to be one of the strangest Christmas beers I've come across. The nose brings aromas of licorice, leather and peaty smokey hints. The palate brings more peaty, leather dried fruit and a hint of sourness that brings a certain dryness to the finish. It's certainly interesting.

For some reason I'm getting the impression some unconventional micro organisms have had some influence here (whether intentionally or not) but what it lacks from my other experiences with madcap beers is that volumptious almost syrupy thickness that a lot of high alcohol beer can carry. It may have a rather complex aroma, but it does fall a bit short.
Posted by Rob at 13:17 4 comments:

The seventh Beer Of Christmas 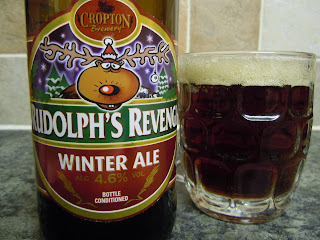 Rudolph's Revenge is one of those Christmas beers that I end up re-visiting each year among a heap load of other readily available seasonals. The bright labelling, its ruby red hue, bready, yeasty malt-driven aroma and zippy forest fruit notes all bring back memories of many a Christmas past (more specifically knocking it back in a half drunken state whilst trying several other beers at Boxing Day parties).


But take the party out of the equation and you can appeciate this better. Its very orthodox bready berry fruit driven palate is enhanced by the natural bottle conditioning. Like the last beer of the series it's very old world and CAMRA friendly (no shock and awe mega hop impact here). So more or less a flawless traditional best bitter and as for the more new world beers, well we might get to them later in the series.
Posted by Rob at 21:14 5 comments:

The sixth Beer Of Christmas 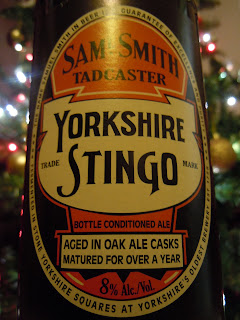 I remember the first time I tried this beer a few years ago. It was Christmas day in fact, I sitting watching Wallace and Gromit whilst eating Wensleydale cheese. You could call it an ultimate Yorkshire experience. It goes well with Wensleydale. Pouring a deep amber with reddish tones Stingo is a mellow, warming approachable winter warmer where woody, dried fruit ﻿and vanilla nuances play off sweet caramelised malts. The finish turns slightly dry and the oak influence is quite subtle given that its oak aged.
In a strange way this beer reminds me of when I (just about) lived in Yorkshire. It's smooth, mild, complex and heavy all in one. In the words of an old Dray man I used to work with; '"Nice mouthfeel".
Posted by Rob at 19:14 5 comments:

The 5th Beer Of Christmas 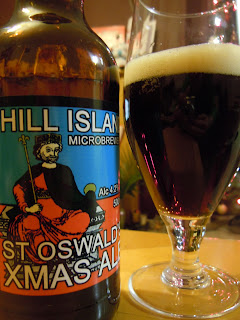 That's right, I'm bigging up the local beers this year. Hill Island are one of the slightly newer breweries on the North East scene, but it was only recently that I discovered this Durham based micro. The beer itself, like many other Hill Island beers is simple, well composed and sessionable.

At this point in the post many bloggers may have lost interest. Mainly because the beer is 1; brown 2; orthodox 3; just 4.2%.  This is true, but it's also delicious. This beer offers a depth of husky, wholesome chocolate malt grain over dark fruit and toffee. The aftertaste is horlicks and malt chocolate. It sure does go down easy, and after a hard days work it sure is the beer for the moment.
Posted by Rob at 15:12 4 comments: 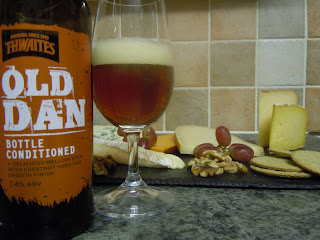 Last night was cheeseboard night. I love cheeseboard night. Getting the cheese out the fridge hours before serving, getting out the knives, chutneys, nuts, grapes and the rest of it all just adds to the experience. Another part of the fun is selecting the right beer to go with it. Thwaites Old Dan at 7.4% was described by fellow blogger Leigh as sweetish toffee-caramel accented beer that drinks a little like a beginners barley wine. In theory, I thought, the kind of beer could nicely contrast the sharp, earthy pungent flavours of various cheeses. So with hardly any other bottled beers left in the house this had to be the one.

Old Dan is indeed a worthy beer. Chestnut amber in colour with fruity alcoholic notes and nutty, caramelised malt. Raisin and fruitcake dominate the finish with more alcohol warmth. With the Chevington and Brie it sails over the earthy grassy textures nicely, but with no fireworks. The two smoked cheeses don't really so much as clash but the smokiness cetainly overpowers.

Old Dan and Berwick Edge have all the right chemistry. Its fruity alcohols really pick up on the tangy fruity notes in the cheese whilst the beer's sweetness contrasts. The problem is at the end of it you can only really taste the cheese. But I can't help it, like many Doddingtons cheeses its bold and full flavoured. But it was the cheese I had never tried that came out top. Fourme d'ambert is a blue cheese that's both creamy, subtle and without the salty tang you would expect. It's rind has a fantastic texture.

Like an old world wine, Old Dan's status as a strong ale is restrained, balanced and easy going. In this case, put both beer and cheese together and they just meld to one. Each one lets the other speak. it might not be the best beer and cheese pairing ever, but probably the best anglo-French alliance since Concord. So in conclusion Thwaites Old Dan is a very versatile beer with many medium strength to mild cheeses and Fourme d'ambert straight rules.
Posted by Rob at 11:30 6 comments:

The fourth beer of Christmas 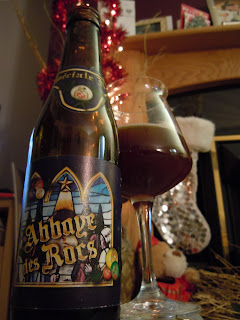 That's what happened to me with this bottle. It seems a lot of Belgian bottled beers I store for a while turn lively (probably due to the use of brewing sugars adding fermentables). Though once it's in the glass it doesn't disappoint. Aromas are of up-front clove, orange peel and nutmeg spice combined with peachy fruity alcohols. The palate opens with a dominant, rich, candy-sugar sweetness that's nuanced with more nutmeg spice. Candy, yeast, peachy fruit and caramelised malt. It sure is on the sweet side, and rather drinkable for its 9% abv. Nice on its own, or as I found out, with cheesecake.
Posted by Rob at 12:00 7 comments:

The third beer of Christmas

Mordue Headmasters Christmas Sermon
Now and then it's always nice to brew something slightly higher gravity. HXS (as its abbreviated) is quite the heavyweight for its 5.2% abv. Deliciously full-bodied and packed with rich fruit cake, berry fruit and caramelised malt leading to sweet candy-sugar notes contrasting prickly challenger hops in the finish.

From memory the brew day went really well. We had a lovely time. A straight-forward big-bodied beer that's now available in cask or bottle. I'm thinking of saving a bottle for the big Christmas day line up, ether for Christmas dinner, or the evening.i
Posted by Rob at 17:30 6 comments: