Greetings readers, it's good to be back. After recent illness I have now been given the privilege of doing a bit of dray work. To those who don't know that means delivering beer. Yes that's right, the glamour, the romance, the look of joy on the landlord's face as you deliver those 9 gallon parcels of joy to his hatch.

Prior to this last week I had not delivered a single cask of beer on my own so being let loose in a transit van around Newcastle city centre was quite the challenge. I'm no Dray Master, like Daleside's Steve or Mordue's Draymaster Col (both were trained at the same at the same training camp in Tibet). But the main thing, as I have stressed, is that all the beer was delivered and there were no fatalities. That's all you need to know. 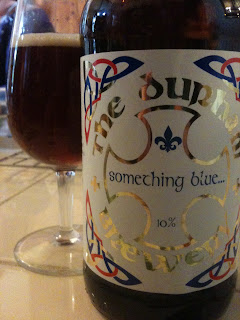 But anyway as it's a nice Bank Holiday break and I have finally managed to bottle the contents of my barrel Elizabeth and re-fill it with some 1750s Porter I thought it might be a good time to open a beer. Something Blue from Durham Brewery was previously reviewed by Leigh. Brewed for the Royal Wedding. A bold 10% English style Barley Wine from the North East's most adventurous brewery. On the nose, loads of almost perfume like alcohols. Taste wise, again loads of warming alcohols and waves of candy sweet malt, orange and a slight cinder toffee like note. Then more bitter orange and warming alcoholic notes follow through in the finish.

I like Durham brewery. Not all of the beers I've had from them have hit the mark but many have been excellent and I like their daring approach and creativity. I do like this one though, and for a 10% beer it's not overly heavy on the body but it is mightily sweet with lots of powerful fusel alcohol/ester like fermentation flavours in abundance. In Leigh's words 'powerful', but none the less it remains to be a relatively balanced, solid example of good old school Barley wine.
Posted by Rob at 21:14 4 comments: 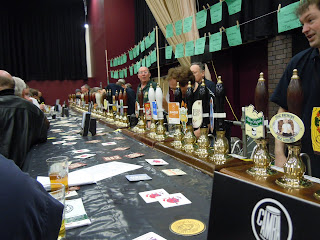 Last Wednesday saw the opening of the 35th Newcastle Beer Festival. Every year I traditionally try to get to it on the first day at least half an hour before the doors open, but the last few years (partly due to living in Harrogate half the time) it hasn't worked out that way. This year however, heading to the event with the Mordue crew I could not only get in the first day but got to visit the exclusive Mordue beer festival at The Hotspur on the way as a kind of warm up. After that brief venture we headed straight to the main event where we got let in with all the trade and sponsor people before it became open to the public (back of the net!). As a bonus I even got my own special VIP badge. 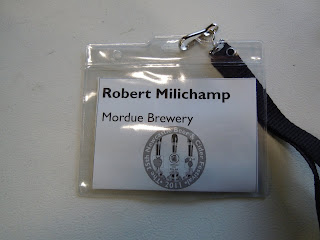 Spelt wrong but it still made me look important
So quite a few faces of the North East brewing scene were around. I got to chat to Mick Hegarty of the Ship Inn brewpub, ex Barefoot brewery head brewer. Gus Odlin from the John Bull also made an appearance and behind the bar today was North East blogging man Chris Mansfield. With my notepad in hand it was time to start things off with some Dark Star Mai Bock. A well rounded interpretation of the German lager style.  Its pale appearance gave nothing away of its subtle fruit and complex malt notes. Next up a modern take on classic IPA, Highland Brewery Orkney IPA had soft caramel underpinnings with under pleasant fruity floral hops. After this I headed back over to the Mordue section to check on the Northumbrian Blonde and the Mordue Ginger ale which came across as a delicate golden ale with ginger overtones. Subtle and pleasant I quite like it, even if the rest of the Mordue staff think it should be something more hardcore. I noticed Allendale Jaspers had a similar subtle ginger influence, but was more amber hued with a caramel malt background, reminiscent of all those other amber hued session beers of Allendale Brewery.

The edgy Tempest Re-Wired Pilsner was vibrantly hoppy with lychee citric notes. A great beer, though it did drink more like a golden ale than a pilsner. Not much to say for the Durham Apollo, that was aching to be brilliant, but seemed a little on the green/young side. 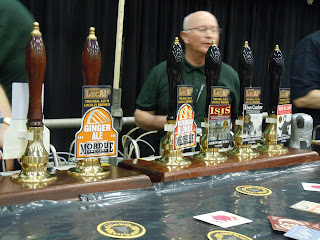 As a sideline some of the students of Darwin Brewery's Brew Lab were out in force advocating two beers from two brew teams made for the festival. The two brews were in direct competition with each other and votes were being collected to determine superiority between the opaque, coffee/liquorish like 3.8% Chewys Wook Stout against the deep amber bronze 4% Mini Kilt Scottish ale, which tasted damn rich and toasty for a 4% beer. Hats off to the Mini Kilt team on that one.
So overall a great night that finished sooner than usual after starting mid afternoon. I failed to determine any such 'beer of the night' on this occasion. Many were good but a lot of people seemed impressed by the Fyne ales range. I had held back on them as I had already tried most of them at my Alnwick local the John Bull. Definitely an under-rated Scottish Brewery. The change of venue to the Northumberland University students union also put a refreshing, more spacious spin on things compared to previous years. Jolly good show.
Posted by Rob at 09:36 2 comments: 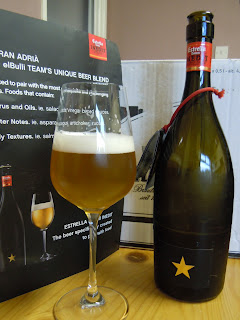 Here's a bottle I picked up from Barcelona airport on the way back from my recent weekend break. With its fancy packaging and its own informative card handout and bottle leaflet. From the makers of Estrella Damm, Inedit, it says is a unique blend of lager and Wit bier styles and is designed for fine dining by being highly versatile with 'the most exquisite and challenging foods'. Apparently Inedit is named after the concept and means "never been done before" (your kidding me, right?). But coming out of a beer desert such as Spain, it sure is promoted with confidence.

So despite the hype, I've seen a lot of beer enthusiasts slag this beer off. Was it because it's a Macro beer, or because it just falls short? Take for example the Beer Nuts take on it. When you try it the term diluted Hoegaarden really does ring true tho. On the nose it's pleasant enough, coriander spice with subtle clove. Palate is very light but soft before the macro-lager influence gives a slight toasty, dry, watery effect that tones down the whole Belgian Wit Bier experience before fading to a dry finish of nothingness.

So I can see why beer enthusiasts wouldn't be drawn to this beer, or even hate it. The marketing really comes across as patronising and dismissive to what the worldwide brewing scene already has to offer. It assumes those reading it know beer only as a yellow fizzy mass market produced watery liquid to be served ice cold and are like 'wow a beer to be served with food, what a novel idea!'.

But despite the criticism I myself am giving this the benefit of the doubt. Think of it in the context of a nation with a relatively boring beer market (i.e. Spain) and how this introduces something a little different, or at least raises intrigue in that market. The beer has some character (although minimal) and what character it doesn't have it makes up for by being almost as bland and refreshing as most other Spanish beers. It's not quite 'lowest common denomenator' and to most beer drinkers at large it sits on the metaphorical line between blandness and interesting. But for a brewing scene such as that found in Spain, it has be a good thing that will hopefully lead drinkers to seek out and explore the world of beer.

Anything like this released over here tho, I would say down with this muck!
Posted by Rob at 10:15 1 comment: 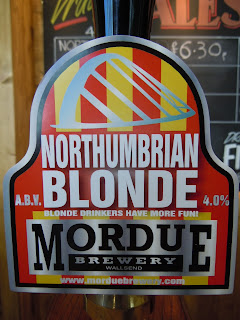 Finding a beer on cask that you yourself helped brew is always a worthwhile experience. It was right in the first week of my Mordue brewing adventures that the very first batch of this 4% Amarillo and New Zealand Green Bullet hop influenced golden ale was pending. Then looking at the forward orders last week I discovered this stuff's going to my local, the mighty John Bull, Alnwick.

So I stroked the two nine gallon casks goodnight and vowed to get myself down the John Bull in the following week to do some on trade quality control. Out of the conditioning tank it was nice enough, but from the handpull it's even better. The aroma brings punchy grapefuit and orange notes that protrude into a hop forward, tangy bitter palate that's balanced by a residual malt sweetness. It has that uncompromising robust Mordue house character. For a 4% golden ale it's not light or elegant but zesty and packed with hop flavour. Nicely drinkable tho.

The good news is this one alongside our seasonal release of Ginger ale, (which I myself helped brew and force the raw Ginger through a blender) Northumbrian Blonde will be available at the Newcastle Beer Festival on April 14th and at the Mordue beer festival at The Hotspur starting on the same date. Alternatively if you wanted a pre-taster you could always pop by the Mordue Brewery shop on April the 9th. 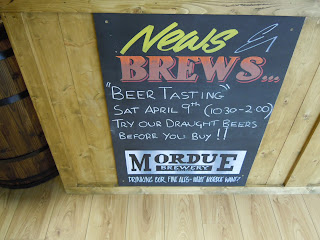 I myself will be at the Newcastle beer festival on the first day as soon as I can possibly manage to get there, It's gonna be huge.
Posted by Rob at 22:28 1 comment: