The 41st Newcastle Beer Festival. Battle of the beers.


So it was that time of year again. The trade session at Newcastle Beer Festival is always a great get together for the local industry. From brewers, to landlords, to wholesalers, this year I got to meet the folk from some newer breweries such as Stu Brew and the respective Errant Brewery. Although it seemed a tad quieter this time the stage was still set to unveil this years Battle Of The Beers winners.

This year Battle Of The Beers was a contest of who could brew the best IPA between 4-6%. Being style specific for the first time this removed the 'paper-scissors-stone' dynamic of previous years where if you entered a big porter style beer you automatically had advantage over a mild. So with the many sub styles of IPA the majority of entrants went with US style IPA, followed by some UK style traditional IPAs then the odd farmhouse IPA and even a Peach IPA from Box Socal brewing.

The Mordue entry this year was 5PA a west cost style IPA. The number 5 represents 5% abv and the use of five hops. It's also double dry hopped. Yet from the brewery I was 89% confident of defeat. Out of the tank 5PA had so much late bitterness it was bound to divide a judging panel. Yet on cask 5PA mellowed into a bold ride of grapefruit and citrus pine, I didn't ever think it would be in such superb form. 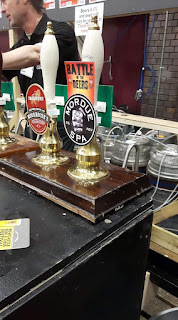 This year our very close runner-up was Almasty Brew Co Mosaic IPA, a 6% NZ-US hop combo this time unfined. It was reasonably hazy, bold but mellow with lots of complex Nelson Sauvin over a medley of soft fruit and pine. Since 2014 the ex Mordue and Tyne Bank brewer Mark McGarry, now Almasty's head brewer, has entered the local scene with a resolve for on-trend bold, uncompromising beers. His second silver at BOTB  was always going to look good on paper. Like an old tennis rivalry, the former chef vs the biochemist we have both undoubtedly added a great deal to the local beer scene. 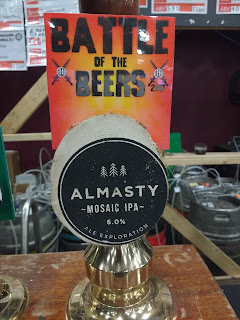 So, after the overwhelming realisation of winning despite being convinced it wasn't going to happen and trying for so long it was time to try new beers. Flash House Iron Giant IPA (BOTB third place) was soft-bodied, unfined and citra led. Yet it got to a point where IPA became tiring and I had to sort myself out with some Leeds Midnight Bell, 4.8% dark mild. Shortly after, the recent SIBA award winner 5.3% Daleside Monkey Wrench was tried with its dark fruit and boozy caramel malts. 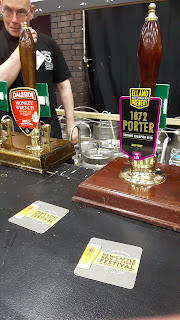 Elland 1872 the former champion beer of Britain was also on, another big beer with lots going on. All in all only a small range of beers were tried in comparison to what was available but it was a great day out. I learned Olicana hops are nothing like Jester and that Stu Brew would kindly let us borrow there tiny brew kit to do short run Panda Frog batches. Just splendid. 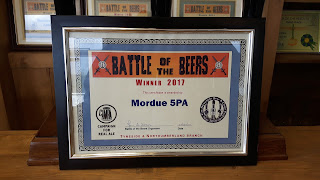 
So this was the first group beer and cheese night in a long time. Beer and cheese has been a common feature on the quest over the years. I've done the one-on-one pairing approach to the freestyle try any cheese with X beer type cheese nights. Some group commercial events also.

This group event was a non-commercial 'parents special' you could say. With the added technicality of five children. Would they stay the distance or would everyone leave early to put them to bed? Or would they put us to bed? I was aware things could have gone either way.


Note that this time round a new approach was taken to pairing. Selecting 2-3 cheeses per each beer would allow freedom with a degree of order. A halfway point between beer 1 with cheese 1, beer 2 with cheese 2 etc or the opposite 'everyone just dive in' approach. Nonetheless first in the lineup was Augustiner Edelstoff, a proper German premium Hells lager at 5.6%. Bold yet delicate, both Brie and Gruyere provided little for it. Durham Cotherstone was a fair match.

Next up was the anticipated, never tested Mordue Workie Ticket (easy to get from work, very food compatible but never tried it with cheese). In the red corner; Doddingtons Original (a nutty cheddar, makes sense) in the blue corner; Doddingtons Admiral Collingwood. The original was a tad sharp for Workie but Admiral Collingwood with its mellow centre and rind washed in brown ale worked harmoniously with enough salty, chalky bite on this cheese to parallel Workie Ticket's late bitterness. 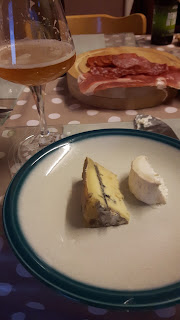 So staying with the cost cutting beer from work tactic we next had Panda Frog Hibernator Bock (6.3%) with Old Amsterdam, a nutty, crunchy Gouda. This textbook pairing went down a treat. Unsurprisingly the fondness for beer and cheese was growing. More surprising was the amount of stamina groups of under five year olds can have when it comes to staying up past bedtime. At this time the children had ceased control of much of the house (living room, kitchen, bathroom, Bridge, engine room), or at least the chocolate stash.

Onwards to Chimay Tripel with Reblochon. This gooey washed rind cheese meets 8% boozy carbonation match was originally meant to be Tripel Karmeliet with Delice de Borgogne, a lovely cheese that didn't really pair with anything. Delice was just too funky. Chimay Tripel played its part but a more exciting chemistry was to found in the final round of pairing. 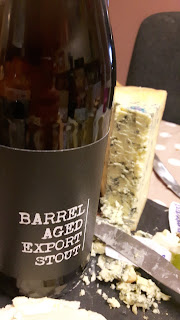 Allendale Barrel Aged Export Stout (7.4%) is a lovely if expensive take on one of the region's finest strong beers. With Stilton there was good chemistry but I felt a less aged original version Export Stout would have done a better job. The beer needed more booze, more bite or rougher edges to go toe to toe with big old salty Stilton.

So it seems beer and cheese has always had an unpredictability factor. Regardless of how many beer author opinions you take in pairing beer X with cheese Y often get; 'well you would think that but actually'. Instinct is probably an equally as useful as literature. Overall this beer and cheese night was a great success, one of the best ever. The great company also made it so.