A summary post you could call it. After not blogging in so long I thought it would be fitting. So far it's been a fairly mixed summer, with June not being the predictably mild to overcast type of month it normally is. Pale ales and lagers were on the agenda, or more specifically cloudy, hoppy paler beers. I noticed this also at Longframlington beer festival, the annual amalgamation of well-selected local and non-local beer meets cider, face painting and a bouncy castle. 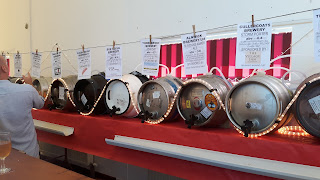 This year the Longfram fest hosted beers from the likes of Box Social, Two By Two, Tempest and Cullercoats brewery. A memorable one was Flash House Hazelnut Stout, Nutella meets liquorice in this medium-bodied, smooth affair. Cullercoats Storm Porter was like a Fuller's London Porter crossed with Old Peculiar. Good substance to it. Tempest Cascadian was also substantial but Two By Two Grapefruit IPA was very pink grapefruit forward but a tad too alcohol and ester heavy for the higher 5.7% abv. A lovely day out of beer with the kids also having fun.

So another highlight this season is WT20. A beer to mark the twentieth annaversary of Workie Ticket winning Champion Beer of Britain. As the folks who work at Mordue know Workie Ticket to be abbreviated to WT on stock labels and the likes. The Mordue equivalant to 1966, 1997 was the biggest year and biggest award in Mordue history. So this year we will be brewing a 6% tribute to the history and the beer. 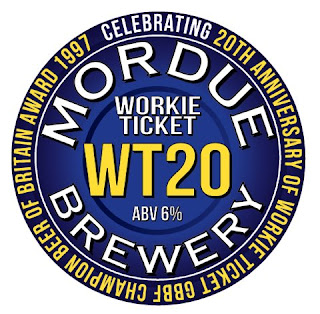 An all-round interesting project. The aim here isn't a first runnings or just a higher gravity version of the 4.5% original. I aim to smooth a few edges out taking a slightly different angle but keep largely loyal to the original template.

Moving on. This month has also been my birthday. Thirty three seems irrelevant but the kids are growing, becoming more demanding and learning new things like how to identify beer in pictures and how to wind parents up. New beers are coming out at Mordue. The brewing scene is seeming more and more overcrowded with new breweries, new trends and new breeds of beer elitists buying into them. 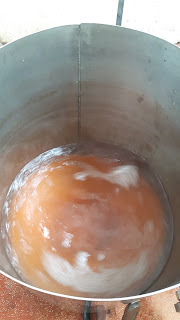 Trans-Atlantic Pale Ale in the underback

On the Panda Frog front this summer we have released Amphibious Four. A 4% amber ale brewed with four malts (pale, munich, cara red, crystal) and four hops (Galaxy, Comet, Citra, Equinox). We also have a Blood Orange IPA in the pipe line along with a few re-releases like New Zealand Pale and Oatmeal Stout. 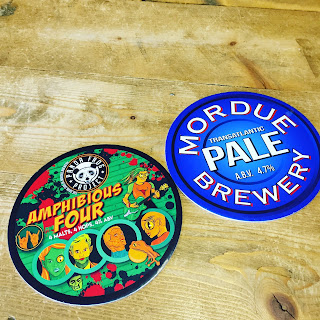 So by no means a dull summer, especially not considering that other new development; http://www.chroniclelive.co.uk/business/business-news/mordue-brewery-newcastle-bar-opening-13219350