The North East craft brewers market was was a craft beer showcase held at the Palace of arts in Exhibition Park near Newcastle University. The basic back story is Wylam Brewery have moved site. Their new 'brew' palace is equipped with a big fancy brew kit (which I forgot to photograph) bar area, some kind of barrel aging program and nice interior design.


The event featured seven breweries of the region on the Friday night session; Wylam, Tyne Bank, Errant, Trufitt, Mordue, Credance and Out There, alongside guests Cloudwater brewery from Manchester. Some quality scran was also on offer. 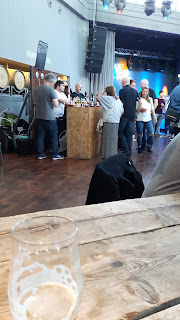 I got a tour of the new brew kit yet the event was mostly about good beer, good people, good food and camaraderie. Sorachi Dollar from Tyne Bank was an early choice for me, a variant from the much respected Silver Dollar. Pine mouthfeel and not overly lemony compared to some sorachi ace hopped beers. Overall impression was quality premium strength pale ale.

Moving on Trufitt from down Middlesbrough way had a very smooth almost creamy Vanilla Porter. I also got to meet the folks at Errant Brewery, relative newcomers to Newcastle's collection of breweries. The Waimea-cascade hopped Blonde ale  Clever Girl brought pleasant mild orange and pine. Credence brewing also had a nice Red ale, a development of their very straight forward core range. 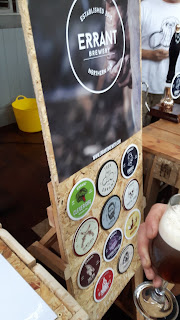 There were familiar sights like Wylam Jakehead and Hexan as well as the Panda Frog/Mordue bar serving our new Sterling-Hersbrucker hopped Pilsner alongside Northumbrian Blonde IPA and Panda Frog Allelic Drift. I also tried a rather nice Cloudwater Centennial IPL. Overall a rather splendid evening.