UK brewing industry; pick your side 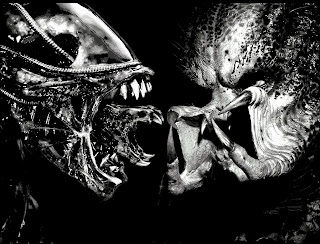 In Alien vs Predator (videogame and the film) you have three sides; Aliens, Predators and Humans. Three races trying to annihilate each other in a battle to the death. In the UK brewing industry you have three sides; Big brewers, craft brewers, real ale brewers. Each side faces a brutal struggle for market dominance in a battle for survival. So which side are you on? Big, craft or real? Let's run through them now:

'Real': Your the traditionalist, your down to earth, you care about the subtle nuances in 'balanced' beers. Cask beer is best and always will be but wait your outdated your yesterdays child you know nothing about progressive brewing and your doomed to fail.

'Craft': You're the non-conformist, leading the revolution. You've got big edgy pump clips that practically glow in the dark and (in your own mind) you're using more new world hops per barrel than anyone else making you a supposed honorary arm of the nation's brewing elite. Sadly anyone can market products like you, and tailor a typical 'craft' product range contract-brewed by whoever.

Big brewers: Unlike the above two groups, who normally respect each other you are the ruthless market overlords who will stop at nothing to maintain market dominance. You may help out the smaller brewers in some ways but to some of them (now that the government has backed down on that evil duty escalator thingy ma-jig) your the main villain again.

OK, so a lot of the stuff written above is a little exaggerated. The majority of brewers don't fall strictly into a category and amongst most of the industry there's a good coherence and mutual respect. I have always felt this, it is part of what I love about being in this brewing industry. Their are however some very elitist sectors amongst the above three industry segments that arguably let their side down. On a whole I'm against the whole craft vs real vs generic brand thing, they all have a place on the market and there's normally plenty of overlap. A long time back I remember once thinking 'is it wrong to love Tokyo* and Daleside Bitter?' Very different beers both brewed with pride and a belief in the product.

As it happens 'craft beer' (add own definition here) is the vogue and everyone wants a piece of it, including the big guys. With reference to post like this and the responses to this post, it becomes more obvious where the divides in the industry are. It was kind of an inevitability that the micro brewing sector could only go so far before the multi-nationals intervened. So who will win? Will a patented official craft beer definition ever come about? Will progressive brewing ever dominate the world erasing the need for any 'lowest common denominator brands'? Or will we all be drinking something from a part of a multi-nationals portfolio?

As you might have guessed this post is related to Workie Ticket's earlier victory win of Gold in category at the GBBF this year. And last Saturday it was it was time for us to receive our award, and hang out with some of the other award-winning folks at the National Brewery Centre in Burton upon Trent.

A beer dinner where an award-winning beer was paired with each course  The above picture, Workie Ticket with Goat's cheese and Red Onion Tart with Rocket & walnut salad served with Balsamic Dressing was one of two appetiser options, the other was served with Fyne Ales Jarl. But overall the feel was for an emphasis on old school beer, and for the most part this was of excellent quality. Elland 1872 Porter is a great beer, a multi dimensional experience that's big and chocolaty one moment then dry and smokey the next with some late bitterness.

We got to listen to Roger Protz do a few talks, all the brewers said their piece and there was even a short cameo from ex-Thornbridge Stefano Cossi. The strange bit was listening to Colin Valentine spark up time to time half expecting him to start ranting about the 'blogeratti' (back in the day it was the hottest topic of the time). Overall it was a great day out. Lots of good food, good beer and good conversation about beer, a splendid day out.
Posted by Rob at 16:12 No comments:


Weighing in at 6.8% abv and around 95 IBU on the richter scale Operation Red Thunder is a an Imperial red ale featuring masses of resinous Amarillo, Cascade and Columbus hops over a huge chewy malt base. I'm rather pleased with it and am especially keen to try the kegged version. The aim here was to produce something bold but balanced. Deep red in colour, this one should smooth out nicely with a bit of age. Keep an eye out for this one.
Posted by Rob at 20:30 No comments: