I could have called this post 'beer drinking highlights of summer 2011' but it's mainly a tribute to my summer of bottle beer drinking in the garden. This has been novel to me because I have only owned a garden for about a year now and the experience of kicking back after a day's work by the lawn on a nice summer's evening with a beer or two is quite pleasant. OK it hasn't been the best of summers, this year's been mostly about the sunshine and showers, but at least it hasn't rained the whole time. Sadly though (or at least in Northumberland) it seems the summer is over and we are now entering that transitionary period between late summer and autumn. 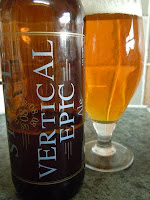 At the other end of the spectrum was the quenching bubblegum tang of Vedett Extra white. A very refreshing Belgian style wheat beer with an extra delicate light wheaty texture. 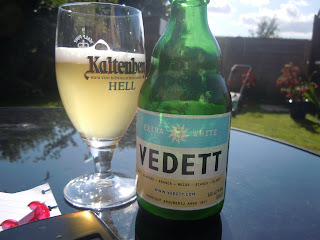 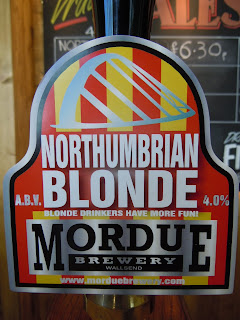 You can't have a summer without a low gravity cask conditioned blonde ale in there somewhere. Northumbrian Blonde has obviously gained popularity since its spring release this year. I myself love its Amarillo hop influenced tang 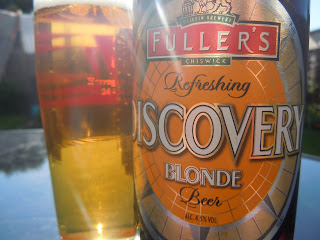 75% continental pilsner, 25% golden ale, that's what I make of it anyways. It works great as a bottled beer both clean and flavouful and great for the sunny days. 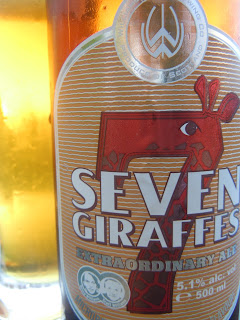 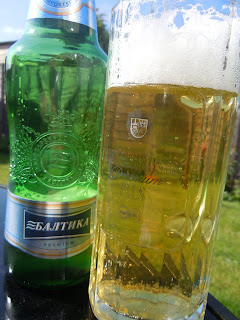 Not really a memorable summer discovery but more of a staple. Months back before I discovered that Tyneside does have some specialist beer shops this Russian brewed Dortmunder style lager helped make up the volume of quenching session beer in the fridge. Malt driven with a clean grainy texture I would argue that it is worthy and not cooking lager.

Well there we have my beer of summer but for now it looks like we'll be saying goodbye to the Northumbrian summer.
Posted by Rob at 21:01 4 comments:

A one for the locals 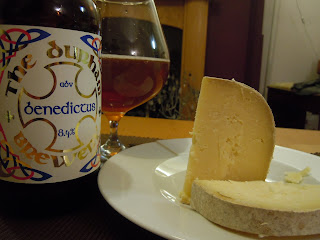 Northumberland Coquetdale is by a distance my favourite cheese of the North East region. It's uncompromisingly earthy, full of texture and has a slight tangy fruity finish. Some call it strong, but cheese lovers seem to think of it as a middle weight.

For a year of so now I have been working on finding the perfect beer paring for this cheese but its strength in flavour and slight dry astringency has made it difficult to pair with many of the local session beers. But out of much trial and error and some success with Belgian Pale ales and strong English pale ales it seems Durham Brewery's Benedictus has proved itself as the ultimate match for this characterful local cheese.

According to the website Benedictus is a Barley wine, but it doesn't seem as heavy as many English Barley wines.  Deliciously fruity, malt driven and with a nice drinkability it seems to marry brilliantly with the flavours of the cheese. Both show a similar strength of character and the rich malt sweetness of Benedictus seems to contrast any rough characteristics of the cheese. I have to admit this is by far my favourite beer and cheese combination of the year so far and probably the best local pairing ever. It's almost like the two were made to be together.
Posted by Rob at 12:20 5 comments:

That's right, on the news for the resurrected Millennium Bridge Ale. check it out here.
Posted by Rob at 22:07 9 comments:

A splendid day out in London


Ahh the cricket. Binoculars in hand and lunch box at the ready, that's the ideal way to watch our lads totally dominate over the teams of the old Empire.

But wait, an hour later and the dark clouds loom over and play is delayed. This cannot be, our lads need enough playing time to totally destroy India and further prove that they're a bad invincible world dominating superteam. But luckily enough for us our research had previously indicated that the Oval cricket ground is close to a place called  Borough Market, home of the much blogged about specialist beer bar The Rake.

Since the early days I have hoped to one day visit The Rake. Mentioned in many British beer blogs and the host for countless product launches and beer tastings it was time for me to finally discover this beer haven that one could almost call the very centre of the UK beer blogging universe. 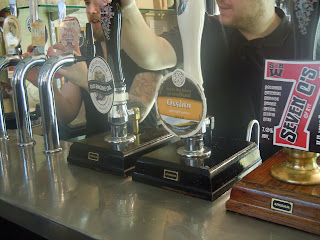 As expected the the place was small, with a big extravagant beer range covering cask, keg and bottled beers from around the world. The big question mark: no Thornbridge, Brew Dog or Dark Star on tap (shock) but I'm sure the big trendy new-world brewers have adorned the Rake taps many times already.

First up for me was a nice chilled schooner of keg Raging Bitch, from the Belgian yeast influenced IPA from the Denver brewer Flying Dog. I was shocked that my Dad, usually the 4% session ale man, also thought it was great. But I think the effect of being surrounded by beer geeks drinking IPAs and the desire for something different took me to my second choice. 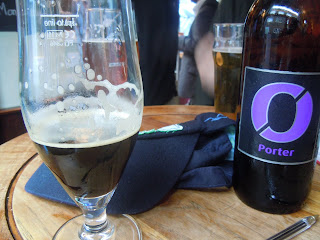 ﻿ ﻿
So as the sun came back out back to the Oval we went. The Rake sure was a better alternative than waiting around in the rain, and returning to a score line of India 8 for 1 was also well received.
Posted by Rob at 17:49 6 comments:

Well, it's been a pretty good weekend. For a start England are now finally the official greatest test cricket team on Earth (woopee!) and I finally got to check out the food at The Broad Chare with its excellent beer range.


As I mentioned in the last post, this weekend was also the exclusive preview tasting of the Mordue Red Rye Riwaka at the Free Trade Inn, Byker. A ten litre polypin connected up to a hand pump provided free halves all round for anyone who wanted to try it and although the feedback I got from it was mostly positive I had noticed an obvious change in the beer compared to how it was raw from the fermenter. It seemed the beer's originally forward hop attack had subsided and given way to the malt and rye backdrop. Some of the aroma also seemed missing but then again I sensed it hadn't developed much condition in its plastic container.

I myself have never been a fan of plastic polypins but the most important thing was that the fundamental characteristics of the beer were largely unchanged and those who tried it seemed to like it. I also explained to a few people that we were planning to make the commercial version a bit more red and less 'London Pride' esque coloured.

Anyway, Saturday a trip to work to check some fermentations was combined with a long anticipated visit to a little shop called Coppers in Gosforth. A kind of regular corner shop with its own section of bottled beers. So like Rehills but with out the cigars and elaborate collection of spirits. My conclusions on the region's beer shops are simple: For American craft beers Coppers edges it, for Italian and European specialist beers go to Rehills but if you're after only local beers Rothbury Wines is the one. 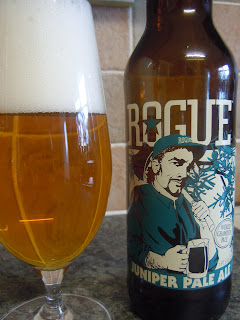 So after the night out came the night in with a Rogue Juniper Pale Ale. Full bodied, and bold with drying spicy juniper notes in the finish, it sure is drinkable. I also discovered how well the Russian Dortmunder style lager Baltika 7 goes with gammon steak. A beer and food pairing advised by the master himself Garrett Oliver.
Posted by Rob at 22:00 4 comments:

For a long while the fact that Mordue brewery were developing a Rye beer was a closely-guarded secret kept by only a chosen few (though I do remember Chris Mansfield blurting it out in the comments of someone else's blog at some point but never mind). Red Rye Riwaka, which was not so long ago to be called Rye Aye Man (fittingly Mordue) is to be a 4.5% red (ish) ale loaded with lime, orange and peppery spice due to be released nationally in October this year exclusively for the Wetherspoons Octoberfest beer festival.


The creator of this beer was me. Though the idea came from the founding brothers' desire to develop some kind of rye beer. I decided the use of the crazy 'in your face' Riwaka hops with their weird Thai spice and lime notes would be a good idea and we took it from there. A trial batch of this beer, using my very own Panda & Frog home brew kit was brewed a few weeks back and for publicity purposes a ten litre polypin of Red Rye Riwaka will be available for anyone to try at the Free Trade Inn in Byker on Friday night this week. I will be also be there but like I say it's only ten litres so when it's gone it's gone.
Posted by Rob at 21:53 13 comments: