If you were a beer, what kind of beer would you be?

I have often been fond of personifications. It was only few months back whilst on a trip to Ben Nevis for a mountain climbing weekend with a few others I was discussing how I sometimes secretly had the urge to compare different women to different beers. For example you could take lovely rounded oatmeal stout and compare it to TV comedy actress Dawn French. A generously spiced, rich winter warmer to TV Chef Nigella Lawson, and a can of Stella to Paris Hilton (all fancy on the outside, over pasteurised fizzy pap on the in). We also discussed what world wide brew would most accurately represent each of the characters of the women on the trip. We had a good range from Fullers London Porter to Destutes Mirror Pond Pale ale. Then the suggestion was made that both men and women could be compared to beers and more people were nominated as different beers. For a few we couldn’t decide on anything obvious, which included myself. Though at times I have thought of myself as more of a mild ale, sometimes I recon I could be of of the more eccentric Belgian offerings, a Rochefort 6 perhaps?

But all this comparison work provided some inspiration for my next brew, wedding ale, which was originally design to reflect the character of the bride (my bride at my wedding in December, the lovely Helen). I'm not 100% with it yet but here is the outline so far:

So basically a rounded amber ale at around 5% abv with a good dose of late hop flavour. This one I'm actually double brewing and transferring into a 9 gallon cask for the wedding, so it should be exiting to get my own homebrew on hand pull for the first time. I have even designed a pump clip so all that’s left to do now is putting it all into practice. Exiting stuff though.
Posted by Rob at 16:51 6 comments: 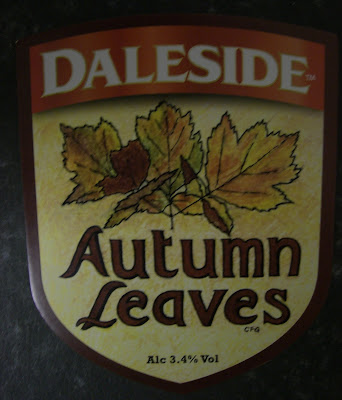 There has never been a time when I have thought of autumn as my favorite season. Don’t get me wrong I like it the way I like most seasons for there various benefits. Though I have never been as fond of spring for some reason, but have always loved winter, and summer has its plus points. But this autumn is to be like no other for myself, for a start it will be my last autumn unmarried and secondly it will be my first knowing an actual beer I designed is out in the pub world being enjoyed by anyone who wants a try.


The beer has a definite autumnal character, leafy hop and aged fruit with a nice rounded mouth feel. Strangely enough when I designed this beer I didn’t specifically intend on designing a seasonal beer, and to be honest I never thought the design would be used, and if it was it would for a one off brew, which makes me even more chuffed. It was just the other day another load of my babies left on their journey to the customer, we waved goodbye, a moving moment indeed.

A walk on the spontaneous side 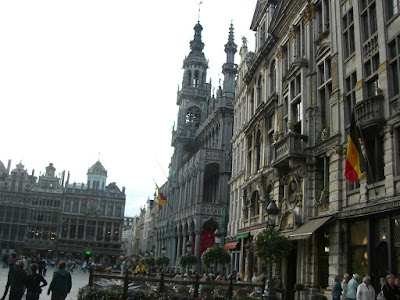 Last weekend me and my lady friend Helen partook in a splendid venture into Brussels, Belgium for a beer hunting holiday. As my first visit to Belgium, I was impressed by the overall diversity and choice of beers available, and the Belgians overall respect for beer in bars, restaurants and elsewhere. Admittedly I have already covered allot of literature on Belgian brewing, and tried many offerings at home, but of particular fascination ifound were the spontaneously fermented Lambic beers, which until recently I had only tried before in commercialized fruit beer form. So much so we decided to visit the Cantillon brewery in Brussels, a tiny little wooden cave like place that actually doubles as a museum. Here we got to see the tools of the Lambic trade, try some samples, and get the head brewers autograph. Following this we used the latest edition of the good beer guide to Belgium, written by Tim Webb to hunt out some spectacular traditional bars filled with elaborate beer ranges. Here allot of new beer hunting territory was covered, but classics such as Duvel and Delirium Tremens were equally welcomed. 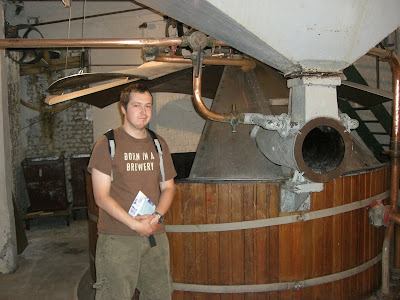 Cantillon's mash tun. Old style.
Another interesting aspect of the holiday I found was the pricing of beers, which seemed to ignore the general UK system of higher abv = higher price, and all standard ales ranging between 6-12% abv were of similar price. It was also noted that the most expensive beers on beer lists were usually traditional gueze or lambic brews found most commonly at 5-6% abv. This would probably make little sense to the average Northern boozer but I myself found it quite fitting as these beers prove to be some of the most fascinating of the holiday. At one point I even considered attempting a gueze home brew but until I find some sherry casks (as lambic beers are fermented in wooden barrels) and age some hops till they become incredibly cheesy it wouldn’t be possible. Plus I would have to have the patience to wait 3 years for the Lambic to mature in the barrel, before I could blend it with some young Lambic to create gueze. Alternatively I could blend my younger Lambics with various fruits such as cherries, grapes or raspberries, or even send them off in neat form. So as we have gathered Lambic brewing it pretty unique, and the beers are worlds apart from your average pint of cask bitter. 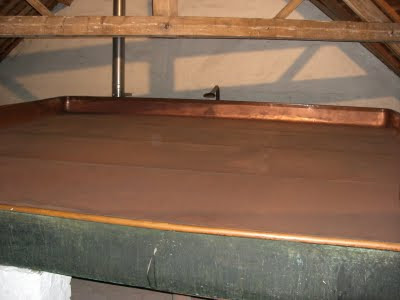 The famous open ship vessel, used by Lambic brewers to cool the wort overnight whilst exposed to the atmosphere, this allows air born wild yeast to and bacteria to contaminate the brew and initiate fermentation of the brew. 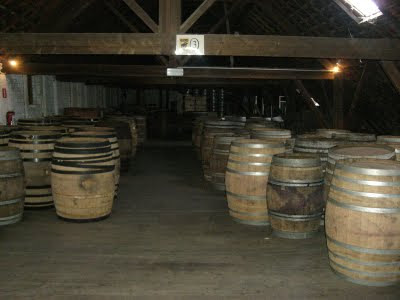