Holidays and the GBBF

Last month it was a great honour to again represent Mordue Brewery at the Great British Beer Festival. Again Workie Ticket was the nominated beer but sadly this time no victory. I recall Roger Protz mentioned in the latest What's Brewing that US hopped beers took the majority of awards this year. In our category of Best Bitters Tiny Rebel's Cwtch was the winner, tasted more Red IPA than best bitter. A great beer none the less. 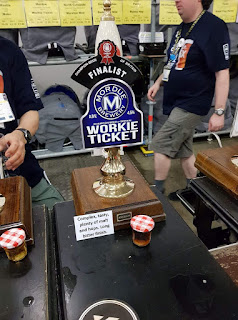 So results aside my third ever visit to the GBBF trade session was a splendid day. The G-Man (Mordue MD), Grey Wolf (External sales man) and myself ventured south via train for the day. We encounterd various people from across the brewing industry including  (for the first time) beer writer Melissa Cole.

A somewhat surreal moment given that back in 2010/11 meeting Melissa Cole was classed as a life ambition.  Me old muckers from Heriot Watt Uni, Ed and Simon also came out of nowhere around the same time.


Another encounter made was the Dredge. Mark Dredge, former lord of the beer bloggers, now beer writer.

I got to sample various London beers and from brewers that you don't often see in the North East. All in all the GBBF was a cracking day out and what followed was the remainder of a short frantic week before going on holiday.

The Vendee region of France is somewhere I'm semi-confident I have visited before on one of my many camping trips to France as a kid. It is quite flat and hosts a scattering of independent breweries. Given that this was not an all inclusive holiday, beers on site weren't served over carbonated and in very small measures. They were however exceedingly expensive.


A highlight of this trip would obviously be a beer and cheese night. This time with exclusively all French cheeses, and the selection on offer was normally vast. Local beers explored were very Belgian influenced with a tendency to be very yeasty and served ether from keg or bottle. Though on this occasion Grimbergen Blonde was the best overall cheese pairing beer.

The holiday overall lacked in session beers (unless you like Kronenbourg). It was rather good however to be able to get some top of the range Belgian beers like Rochefort 8 at around £2 a bottle from the supermarket.

As of most holidays of recent the balancing  act of beer hunting with parenting was in play. Beer budget aside at times the Bairn/s will stress the desire for a certain toys that it is really absolutely essentially mandatory you buy them. Then you will end up carrying that toy around for the rest of the day. Having only one toy that both kids want can trigger protests that could upgrade to a Paddy. 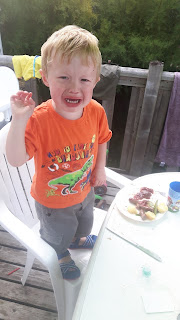 a: too much ketchup on plate
b: wrong cup
c: tired
d: Nam flashback

So in short the kids were not entirely used to long car journeys and long days in the sun but still had a great time.
I give the French lots of marks for effort on their beer scene, it seems to have expanded a lot since my past ventures to the country. I did drink a few Belgian ales but one beer I went back to a few times was Fisher Tradition. Sort of like the French equivelant of McEwans Champion in the sense it's cheap as chips, decent, reliable supermarket beer. 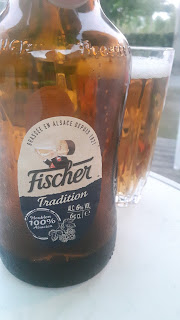 Vaguely a Marzen style lager, clean toasty grain and a rounded hint of boozyness in the finish from the 6% abv. Supermarket beer perhaps but the Triple Hop version at 7.2% was one of the beers of the holiday showcasing the effect of much under-rated low alpha European hops. A tad paler than Tradition with creamy burnt caramel and Peach. Really soft with good drinkability. 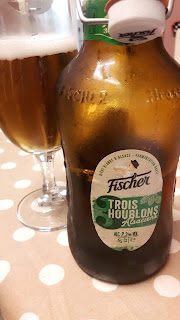 So overall the France holiday was great. I recommend it if you like Belgian esque type beers and don't mind getting away from the current cloudy hoppy pale beer/cloudy sour (with fruit/ other stuff thrown in) UK trend. It's also good for cheese.