As many of my readers are probably now familiar with my ramblings about the glory of Yorkshire, this time I have decided to cover Scotland, and this is for two reasons;

1: Last weeks episode of Drink of Britain covered both whisky and beer in Scotland. It was good to see the lads from Brew Dog being featured drinking with Oz and James on a park bench. I myself have met both of James Watt and head brewer Martin Dickie (I have his autograph) as well as visit the brewery.

2: Its Burns night. But sadly I will be saving my McEwans Scotch ale and dram of single malt till tomorrow night as I will be getting up incredibly early tomorrow to drive to work.

But anyway, for people who know beer know Scotland is traditionally famous for its heavier, stronger, malt accented ales by comparison to English counterparts. However of recent times the brewers of Scotland have diversified their products and much more can be sought after than the classic 60/, 70/, 80/ etc. In fact the country seems to brew many of the most full flavoured and creative beers the UK has to offer, from the likes of Brew Dog and Williams brother with their ‘new world’ beers approach to Broughton ales and Traquair house with classic masterpieces of the Scotch ale style. So if you go be sure to hunt out some beers, because there’s plenty on offer.
Posted by Rob at 11:05 No comments:

A New year… Of more beer.

The beginning of this month I got round to finally bottling my very own Vintage 2008 ale after just over 4 months of aging. At 11.7% a.b.v (and that’s after the primary fermentation) this is indeed the strongest beer I have home brewed, and a very attenuative yeast strain was used to enhance the potency. The interesting fact with this brew was that it was not originally intended to come out at such a high gravity. Some miss-judgement concerning my mash tun extract efficiency turned a target gravity of 1.092 to the immense 1.112! Anyhow my first tastings were promising, and I shall be conducting vertical tastings on this one for years to come.
Further good news comes in the form of another T.V series, in the form of Oz and Clark Drink of Britain, finally a T.V series covering beer that isn’t pandered with gimmicky disrespectful, beer degrading, immature rubbish like last years Morrisey Fox series. In fact from what I have heard and seen Oz Clark is very much a professional beer taster. OK at times he seems to over emphasise the traditional aspects of British brewing, but lets not forget that these days craft brewing can be as much about innovation as tradition, both here and abroad. None the less I sense the brewing force is strong with this one.
However off the screens not much seems to have changed since 2008 yet. I have tried a few interesting beers from Leeds brewery and despite Christmas and new year have managed not to consume all of my cellared/special occasion beers. Admittedly quite a few will probably be consumed at my wedding in December, where I am planning to home brew my very own wedding ale which will be racked into an actual cask borrowed from my work the Daleside brewery. The downside of this plan maybe that I will have to do my own cellarmanship work before the day, and due to my capacity shall have to do a ‘double brew’. I.e. brew two 5 gallon batched of wedding ale in the same day to fill a 9 gallon cask. Given a few extra demi-johns and a hot liquor tank for my birthday this should not be a problem but will probably still mean a 10-12 hour day of home brewing. Brutal stuff. 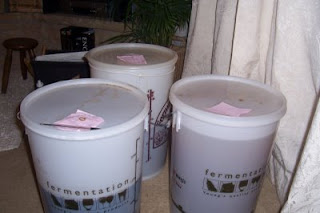 Home brew: Back from the days of living and brewing at my parents. Having plenty of free time as a student, a higher turnover was achievable with batches being brewed at a time. Sadly much of it lacked quality.
Posted by Rob at 21:20 2 comments: