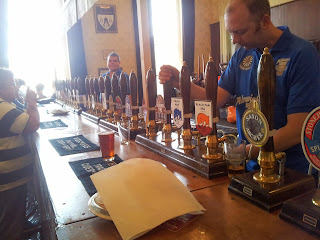 So it's that time of year again. The Alnwick Beer Festival 2013 has been long awaited this year, and as many may know runs in conjunction with Alnwick Food Festival in the town hall. After last year the big question for me was; would Mordue be there, or not?? As it turns out, we were! Autumn Tyne and IPA were in good form and selling well.

This year (as last year) there was a theme. The theme 'Counties' meaning beers from the various counties of the England. Some solid classics were on offer, York Centurion Ghost was always a solid dependable choice for a dark strong ale. Thwaites Wainwright was its pleasant sessionable self though Hopback Summer Lightning seemed a little tired, a mere shadow of its best. Blonde ales seemed a plenty, so did bitters. In fact you probably could have confused the theme with 'session bitters and blonde ales from the different counties of England'. No Stout this year, or Porter, Scotch ales or Wheat beers. Wharfebank's Hop of the World Galaxy gave a smidgen of hope to those on the hunt for something a tad more out of the ordinary. This beer reminded me distinctly of one of those home brews that got tucked to one side eventually making its way to the sink. Flat, sweet caramel but no Galaxy. Yet make no mistake plenty of quality beers were on offer with the likes of Stonehenge, Pictish Brewing and Black Paw all having worthy offerings but after a while it got a bit repetitive. Good festival though, definitely worth a visit.
Posted by Rob at 21:31 No comments: 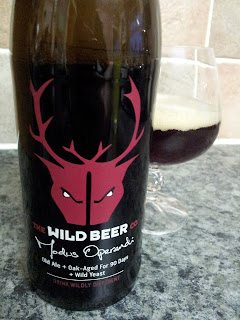 Boy did that summer seem to end quick. Anyway it's time to settle down with some wild and crazy bottled beer, this time from a brewery way down south in lovely place called Somerset.

Basically Modus Operandi (not to be confused with SKA brewing Modus Hoperandi) is a barrel-aged old ale that's been given the old wild yeast treatment. I'm sensing a little Gale's Prize Old Ale or Russian River type inspiration from this one. That signature 'Brett' nose is evident, then it initially hits you with rasping strawberry, caramel and cherry. A sweetish body with subtle woody-caramel undertones is contrasted by tart acidity running right to the finish. Lots of berry flavours, and not assertively sour. Somehow there seems to be a lot going on for its modest 7% abv and I also found this to be a good beer for steak and stilton sauce although I imagine it would be great with duck or venison.

Overall an intriguing and well balanced bit of brewing and as far as specialist sour beers go this is a good call.
Posted by Rob at 10:48 1 comment: