I realised something the other day, for the first time ever it's the end of May and I've still not blogged my exclusive mild ale in May post. This year I didn't feel the need. Anyhow, aside from my liking for Mild, the close relative English Brown ale is another beer I like to frequent now and again and is especially good with things like roast beef or hard cheeses such as Comte. 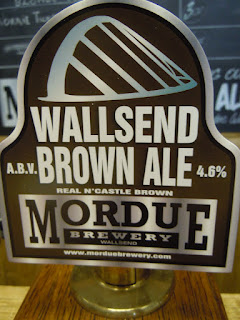 When I first started at Mordue I seem to remember asking about Wallsend Brown Ale as I regarded it as one of the region's finest examples of the style. I was sad to hear that the smoked malt-influenced brew was not to be brewed again (same goes for Jarrow's world excellent version of the style), but it turns out they were wrong and the classic has indeed returned, this time slightly smokier than before. With all its bready malt, berry fruit and smoked malt depth, Wallsend brown ale is in pubs now, but get hold of it quick as there isn't much left.
Posted by Rob at 11:54 140 comments: 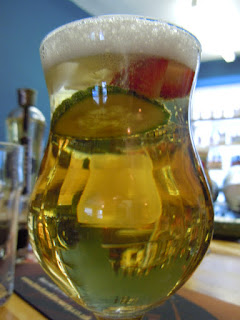 Many people will find that there is something distinctly wrong with the above picture. Some might say almost, disturbingly wrong.

Beer mixology is basically about mixing beers with various liquers, spirits and other stuff to create what is more or less a beer cocktail. Across the beer blogosphere it's been given bits of coverage here and there but the blogger who really caught my attention with it was the Beer Wench. Now Beer mixology even has its own website. Something I've often noticed about beer trends are that what starts in the USA usually ends up over here. That's not to say that the concept of blending beer with other drinks or even other beers is remotely new but something that could arguably complement and enhance the current global craft beer scene.

Up to now I have only tried a few beer cocktails, mostly of them made up by ma main man Justin at Alnwick's local craft beer bar 3 Wise Monkeys. To be honest, I find them interesting though I can't see myself drinking them all night. But what do you think? Is beer mixology sacrilege of good beer? Just a fad? Or an art form in its own right?
Posted by Rob at 14:40 6 comments: 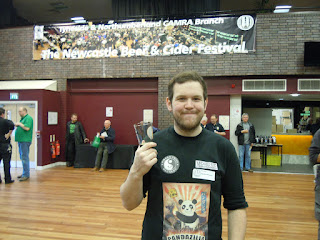 That's right, the wing man is leaving and in just a couple of weeks.

It was about a year ago now that Dave joined the Mordue crew. I remember the whole chapter well. Mark's departure to Tyne Bank led to lots of long hours of work, and it was around then that I really got to grips with the Mordue kit and system of work. Then eventually former Cameron's microbiologist Dave came along, and a level of normality was restored

Dave will leave with experience of working in a small brewery. He will also have refreshed his memory of many of the lines from the film Scum, and some even from Commando (two of the greatest films ever made). I will miss his cups of tea, the finest the company can offer, but now he is moving on to a brew pub in York.

Below you can watch the video of Dave's initial job interview for Mordue, with Matt and Gary. Just remember that he did get the job at the end of it. If anyone wants to be the new wing man please don't hesitate to contact the office, we promise your interview won't be quite as bad as the one referenced.


Farewell Dave, and good luck with the brewing ventures.
Posted by Rob at 19:15 11 comments: 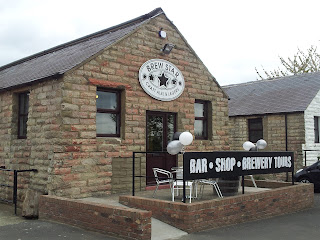 It's been a while since my last brewery visit but last weekend I managed to get myself down to the outskirts of Morpeth for the official Brew Star opening day. Those familiar with Brew Star will know them as part of the North East's new wave of craft brewers. 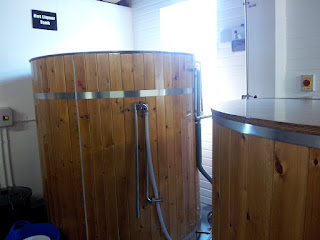 Unleashed only this year, Brew Star are known mainly for core products Sinistar (4.3%) with its grainy malt and hop kick and Blonde Star, their 4.1% clean textured blonde ale that's designed to convert the region's lager swilling masses to artisan beer. On top of these they have plenty of pending projects, including an approachable and sweet Rum & Raisin trial brew that was available on the day.


You get the sense that everything about Brew Star is very neat, modern and with a subtle edge of cool, and after finally getting a proper meet with owners Simon and Dawn I discovered the place is run by friendly folk. Simon showed me round the very compact, well ordered brewery with its nice shiny yet simple 10 barrel brew plant. As he explained, not quite perfect yet but looking very 'made to measure'.

So overall a very pleasant afternoon filled with good beer, good food (especially the pies) and plenty of familiar faces of the region's brewing scene. Later on Justin from the 3 Wise Monkeys turned up to do some beer cocktails but we missed that one. But just like with Allendale, Brew Star, Rob's Beer Quest Salutes you.
Posted by Rob at 21:19 3 comments: