The eleventh Geordie beer of Christmas 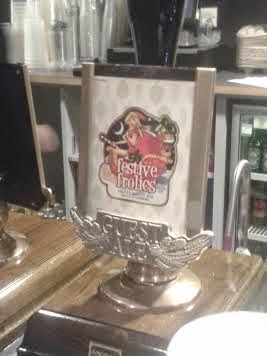 Now then, an important point to make with this entry is that it's not all about virtuoso craft kids in sheds lobbing kilos of hops, orange peel, fruit or whatever else into the mix. As you may have guessed, the Hartlepool-based Camerons brewery is huge (the 11th biggest in the UK) with its own pub estate.

Like many of other Camerons' beers 4.6% Festive Frolics is unapologetically old school, bready characterful and laced with dark fruit and prickly English hops. It's simple, well composed and not so heavy you couldn't easily knock back three or four pints of it in a sitting. All in all, this is a quality pint.
Posted by Rob at 21:07 6 comments:

The tenth Geordie beer of Christmas 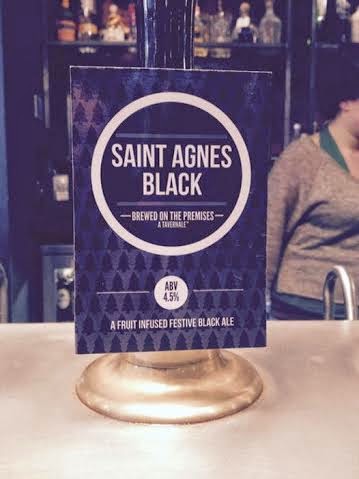 Aside form all breweries great and small, comes the brewpub. Newcastle's Quayside based brewpub The Bridge Tavern to be more precise. It houses a two hectolitre posh looking kit run by Newcastle's own brewing mercenary Joe Roberts, formerly of of Allendale, Tyne Bank and Anarchy.

Joe has the ultimate freedom as a brewer churning out one-off specials on a weekly basis. Saint Agnes Black is a 4.5% fruit-infused festive black ale. It drinks like a slightly weighty, creamy, smooth stout with some interesting blackberry like dark fruits building in the finish. Certainly worth a try.
Posted by Rob at 21:18 5 comments:

The ninth Geordie beer of Christmas 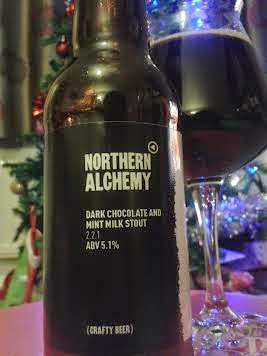 I've always loved the diversity of the brewing scene. From the grand enterprises efficiently churning out vast volumes of national brands to... Well... These guys.

Northern Alchemy at present is one of the region's newest breweries. A tiny brew kit operating within a 30-foot converted shipping container run by brothers-in-law Carl Kennedy and Andy Aitchison (former Anarchy and Hadrian & Border). Together they produce beers of a creative nature, of often abstract hybrid styles that raise intrigue and curiosity all unfined, unfiltered, unpasteurised in keg and bottle form. I seem to remember Coffee and Orange Oatmeal pale generating an unforgettable  WTF moment at first sip. A complete mind bender. Raspberry and Mint Dark Saison was sensual, harmonious and professionally done.

Moving on we have a Christmas beer like no other (but from what I hear this isn't exclusively a Christmas special). Dark Chocolate and Mint Milk stout is the closest beer will ever get to After Eights. Velvety and light then dominant dark chocolate. Try it alongside an After Eight mint  only the slight bready, yeasty finish separates the two. This is a very refined stout from one of the regions most creative and technically proficient brewers.
Posted by Rob at 20:47 4 comments:

The eighth Geordie beer of Christmas 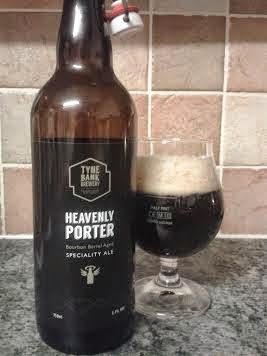 Tyne Bank were one of the main players of the 2011/2012 new wave of North East brewers. Along with likes of Anarchy, Out There and Co they some what rejuvenated the local scene. Not that anything was wrong with the scene before this era, with the exception that many Geordies would ponder; 'where's our Bristol Beer Factory, The Kernel, Summer Wine etc?' as if they were somehow missing out. The likes of Tyne Bank and Anarchy filled that gap, and along with them came others, hence the End Range, hence Panda Frog Project, Durham Diablous and Wylam Jakehead, beer launch after beer launch and the rest they say is history.

So although not strictly pioneers, Tyne Bank Brewery are pioneers of an era. The array of beers they produce is ever-changing including various, speciality ingredient-infused stouts and pale ales. They have grafted awards from SIBA and Great Taste and have done collaboration brews with Hand Drawn Monkey and Brew Dog. Heavenly Porter is a 5.4% porter matured with Heaven Hill bourbon before being aged for six months in a Heaven Hill bourbon barrel. It's packaged in smart looking 750ml bottles that open with a pop. This bottle was courtesy of Brewery owner Julia Austin and for this I am most grateful.

Now I've had my bad experiences with oak aged beers before and will have to point out that this beer is in no way overly harsh or woody. Initial impressions are of apples and pears, an almost cider-like note overlaid with rugged, wood-coated, caramelised, mature, fruit-contrasting sweet vanilla. It's a bold, smooth woody ride that finishes with subtle crème caramel and more oaky vanilla. As far as oak aged beers go this has class and character in equal balance with approachability at its abv. I recommend this with a medium-bodied cigar and a leather swivel chair, if you've got one.
Posted by Rob at 18:22 4 comments:

The seventh Geordie beer of Christmas 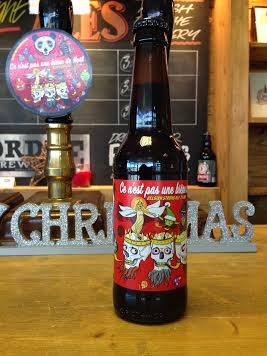 OK this might be breaking the rules a little having two Mordue beers. But this is a Panda Frog beer, which is technically a Mordue beer so call it shameless self promotion. The name Ce n'est pas une bière de noel, or 'This is not a Christmas beer' in French originates back from the various attempts to name the beer. The  office/higher powers that be wanted to label the beer as a Christmas seasonal and I was trying to explain that the beer wasn't originally conceptualised as a Christmas beer.

It's been nearly three years since Mordue Brewery launched its experimental arm named after my very own home brew kit. In 2012 our first beer, Pandazilla was launched at Newcastle Beer Festival, a less than conventional black IPA. Since then my four annual brews have tended to keep things varied and a little less than predictable. Not really following what anyone else is brewing, or what anyone else wants me to brew. This year Panda Frog was proud to win the public voted beer of the festival at Durham Beer Festival. We are also chuffed with our new crazy branding courtesy of Oliver Fowler.

Ce n'est pas une bière de Noel is an all-malt 7% deep reddish-hued Belgian strong ale. No spices are involved and the beer is hopped with Bobek and Belma hops and blended with blackberry, strawberry, raspberry and blackcurrant juice post fermentation. Despite this the intial taste is all sweet, boozy, cherry rasin and caramel. There's some spice, banana and a brisk strawberry-like bitterness with some phenolics. There's an echo of Scotch Heavy going on but it's more obviously Belgian style. I am rather chuffed with it and have a marginal preference for the bottled/kegged filtered version with its more refined character.

The sixth Geordie beer of Christmas 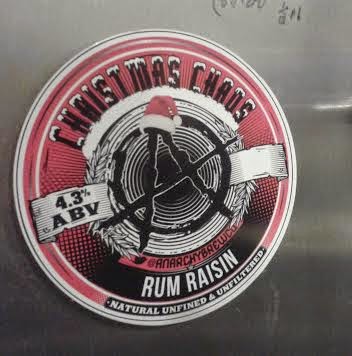 So finally I got hold of another Christmas seasonal. Late November/early December is a period where seasonal beers are bought in but no one's putting them on the bar. Some crafty thinking got me to Anarchy Brew Co itself to sample this and get a bonus bottle of something else quite special and un-released from Michael himself, the head brewer-Yorkshire man.

I remember posting a couple of times on Anarchy. The ground breaking release of Sublime Chaos was one post. In general Anarchy ether come out with aggressive, flavour-forward beers, or ones with real class. Hybrid beer styles, hopped up IPAs and speciality ingredients is the motto and owners Simon and Dawn Miles have done well expanding the Morpeth-based site and picking up SIBA awards.

Christmas Chaos is a 4.3% rum and raisin infused porter-like beer. Jet black in colour, opening with rum-like booziness before inky, roast grain and fruity raisin take over. It's fairly light-bodied and like many Anarchy beers it delivers clean-cut, concise flavours. This one certainly does what it says on the tin.
Posted by Rob at 19:27 5 comments:

The fifth Geordie beer of Christmas 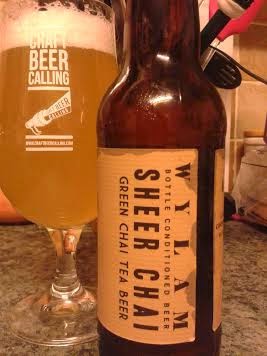 Wylam Brewery has always been a class act to follow on the Geordie scene. I will always remember my first Silver Ghost at Newcastle Beer Festival, a moment of sheer clarity. Like Allendale, Wylam came about during the early noughties period. This was back when I started drinking real ale, shit I mean craft beer. But back then everyone called it real ale, and Wylam were one of the earliest local go-to pints.

Nowadays Wylam have moved on a bit. From their no-brainer, single-hop series to more sophisticated offerings such as Hexan Black Wit (with its recent SIBA North award) and the uncompromising Jakehead IPA. This beer I only discovered recently.

Sheer Chai is a 3.6% concoction derived from pale and wheat malts combining with Himalayan and Indian green teas. What hops were used, I would have no idea, as the peculiar feature of the beer is in its mind-bending complexity for such a low abv. Its flavour profile is said to include cardamom, pistachio, cinnamon, liquorice root. I certainly get a lot of liquorice root and cardamom in the finish. It's very light and cleansing, think fresh spearmint like palate cleansing. Sessionable and odd yet still a class beer.

The fourth Geordie beer of Christmas 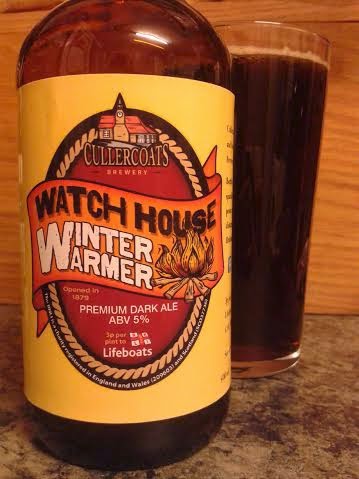 Cullercoat's Brewery, like others, emerged among the 2011/2012 'new wave' of Geordie breweries. A very simple yet efficient looking kit run by the former solicitor Bill Scantlebury. Bill is a splendid chap, with a liking for the RNLI. In fact his brewery is a source of charity for the RNLI and his beer names all on that theme. He has developed a small, quaint set of distinctively labelled ales that (unique to the region) are only brewed using British hops and malts.

Here Bramling Cross is the UK hop of choice known for its woody, berry fruit flavours in this 5.5% premium dark ale. Some of my old local favourites such as Silver Ghost (Wylam) and Matfen Magic (High House Farm) use Bramling cross. Here it's evident in a spicy blackberry like finish after a weighty caramel and burnt toffee malt front. The bottle conditioning gives a gentle carbonation almost is if it were from the hand pull. A winter warmer through and through.