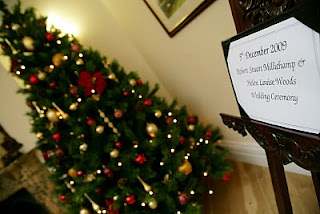 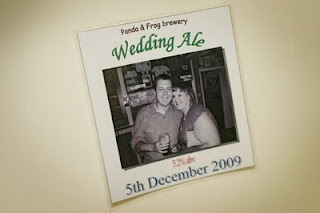 A great day for partying and beer drinking. A total of three casks were fully tapped and stillaged on the day, two pins, Daleside Blonde and Daleside Monkey Wrench, alongside my very own 5.2% amber hued pale ale. From memory it was all drank by about 10pm. 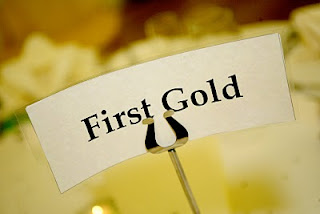 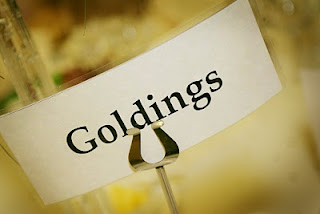 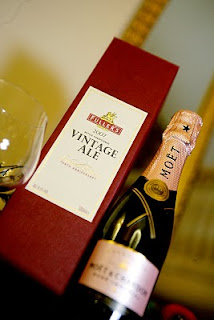 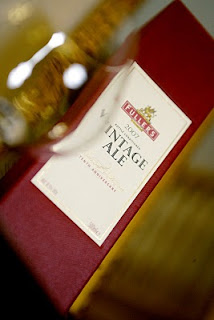 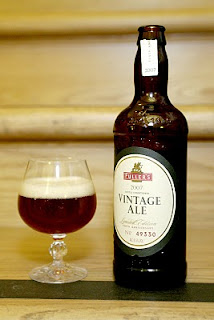 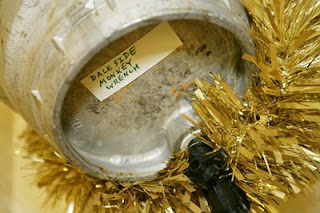 Note the Christmas decorations on the casks, it was that time of year after all. 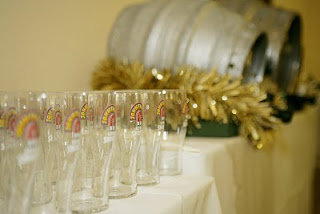 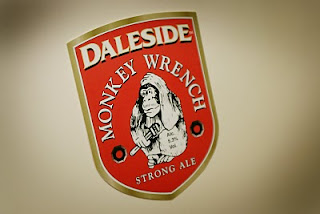 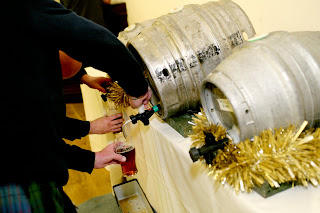 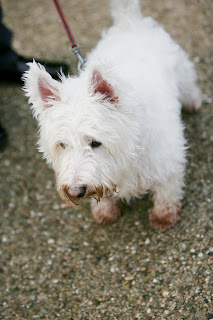 Even our little friend Troy turned up for the day.
Posted by Rob at 18:31 5 comments: 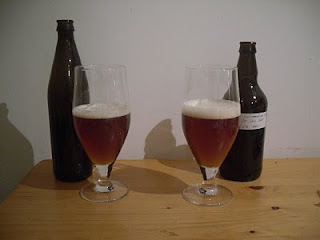 As a follow up post to my previous mingling with collaborative brewing I thought I'd put in some conclusions. Depicted above, the IPA shown on your right is that from collaborative brewer and ex Heriot-Watt university chum Simon, from Cambridge. On the left is my own interpretation. Both were brewed to be as identical as possible using different yeast strains on most defiantly different water supplies, but came out noticeably different. To start, although its hard to tell from the picture Simon's brew is just shade lighter in colour. His beer produced a more forward bitterness, firmer more integrated palate with yeasty caramelised tones and alittle candy sugar. My beers yeast (the Daleside breweries house strain) pushed hop bitterness to the back revealing a malty fullness at its core, with plenty of jammy malt and fruity ester.

From my impressions I would say that my beer tastes the most out of style, drinking more like a heavy amber ale, whereas Simon's (using White labs English ale yeast) has that signature English pale ale character. Both of these classic 'old School' British India pale ales are decent beers, in fact half my batch has already been drunk. Sadly Ed's beer apparently had to be disposed of due to infection. Its happened to me before and its not nice, you just have to move on.
Posted by Rob at 10:29 No comments:

The real dark side.

The Brew-I, my new found/made up religion was initially set up to counter the dark side of the brewing force. Global mega-brewers pushing their lifeless product with multi-million pound advertising campaigns. We all know the score. Then we have the pub-co’s, we all hate them and there evil market manipulating ways. But as a Brew-I priest I feel it must be emphasized that there is always balance to the force. Beer enthusiasts/the Brew-I as a whole act to counter the forces of the dark side, while the dark side use all too familiar tactics, marketing, consumer brand familiarity and stacking high selling cheap.

To tell the truth the Brew-I/beer enthusiast are amongst a minority. I have often thought wouldn’t it be a great world if almost everyone drank craft beer, and none of this mass market lowest common denominator beer existed. Or would it be? Or just maybe it might take the fun out of it, being a beer geek and all that is about hunting out rare beers and the best places to drink them. Finding folks like yourself and chatting to them for hours about beer, being part of a slow turning revolution would be no fun if there was nothing to revolutionize. Part of the thrill is in the chase so to speak.

But the thing is big brewers, small brewers, wholesalers, campaigner groups and all the organizations that make up the brewing industry seem to exist and evolve within a world of ever changing market equilibriums. All parts fit together to make the whole. This theory is well explained on a blog by the well known blogger/beer writer Pete Brown.

Here Pete points out that although its all good slagging off mass market beers or brewers, or having a go at CAMRA for being over traditional, or slating the Pub-co’s or pub licensing laws it wont help the brewing worlds position at all against the more real, sinister and deadly threat it now faces. This, as you would have probably guessed is from the neo-prohibitionists and government lobby groups.

You have probably heard it all before, in the papers and news etch about how alcohol causes such and such many deaths, cost the government so much money, is ruining everyone’s health and is destroying the very fabric or morality in the UK blah blah blah, blah blah all so they wont look as bad with they introduce the next tax hikes, fleecing the working folk of Britain out of as much as they can get away with. This seems to have sparked up allot of outrage within the beer blogging world.

I advise you read his blog as it completely pulls apart the neo-prohibitionist alcohol scare mongering information post by post. Its quite compelling, like watching a Rocky film. 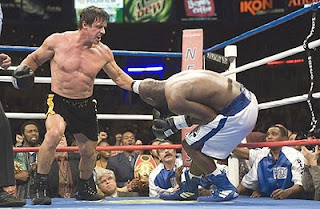 Go on Pete, just one more round! I mean blog post!

But sadly I doubt blogger rants will have much impact on the situation on a whole, no matter how well written. But the bottom line is that people have a right to drink beer (or any other alcoholic beverage), but we also have a responsibility. Pubs, bars, shops and supermarkets all have a right to sell booze, but they also have a responsibility. So when people have the choice to pay £2.70 a pint in the social environment of the pub or going to the supermarket for the ‘12 cans for £5’ offer, (the sign right in your face as you enter the store) who is really taking responsibility?
Posted by Rob at 20:50 3 comments:

Beer for the snow.

Getting married, hunting beer in Maui, Christmas then new year. But who's to say the parties over? This weekend everywhere seems covered in snow, like it has been since we got back in the UK last month. So stuck indoors for the weekend was the best excuse for some heavyweight beer and food pairing. 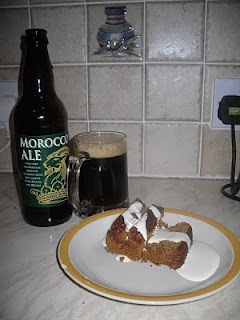 Morocco ale and ginger cake went pretty well, given the rich, cakey gingery nature of the beer. This was followed up by a heavy dose of some of my new Whiskies.

Now I know I'm still quite new to the beer-food pairing game, and I'm sure the likes of Mark Dredge could advise a good pairing or two. But from what I've found so far, one of the simplest and best ways to enjoy epipanic combinations it to take your regular cheese board and pair it with a barley wine or strong Belgian ale. The theory is to use a beer with enough intensity to stand up to the strongest cheese on the board. So from the cellar, brought all the way from California for me as a present, comes this one. 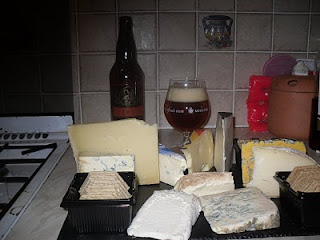 Stone Old Guardian Barley Wine (early 2009 release) at 11.3% certainly held its weight. A beast of beer packed with bold but smooth malt and masses of citrus hops. Very well integrated and drinkable... In fact too drinkable, so drinkable it drinks more like a beer almost half its abv. This leaves me wondering where all the heavy ester and fusel alcohol fermentation flavors have gone? Fermentation temperature was probably well controlled, and lagering may have been used? But it defiantly did a good job of pairing with the board, especially one particular with a soft,creamy Scottish blue.

Sadly I wont be able to use this beer in my official Brew-I beer and cheese evening in a few months time as it is unavailable in the UK. I will be hunting out some US style pale or India pale ales to pair with soft creamy blues. I also discovered once the versatility of Gueze with cheese, like a theme park of powerful acidity and carbonation slicing through fat. Should give me something to think about in the coming months. I'm also thinking of brewing my own light mild for the occasion, having something to cleanse the palate between tastings is a good idea.
Posted by Rob at 16:45 3 comments: 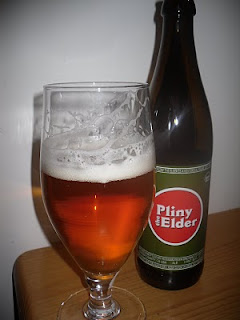 This one was obtained during my stay in San Francisco. Pours a nice mid golden colour and kicks off one hell of a fresh citrucy hop aroma. Truth be told I wasn't sure what to expect from this one. The term double IPA makes you suspect it might take your throat away with furious blasts of bitterness, but turns out it didn't. Pliny is nothing less than a symphony of fresh cascading U.S hops, medium bodied, and just held in balance by chewy rounded malt. Clean and mouth puckeringly dry but without being over the top would be a good description. But its the sheer fresh, floral hoppiness that excells in this beer, and coming all the way from San Francisco I didnt expect it. As I mentioned at the time, this is probably the best American style IPA I have ever tried, Goose Island, Brew Dog Punk IPA, Stone IPA and Jaipur all come close. But far too often they focus on being bold and brash, this seemed truly elegant. 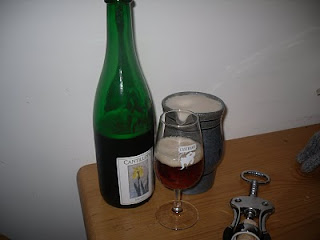 Cantillon are a very traditional brewery. Or should I say Cantillon are a very traditional brewery who like to experiment allot with their craft. For those of you who don’t know, the signature difference between Iris and other Lambics is that Iris is brewed with unaged hops, whereas other lambics use hops that have been purposely aged. A lambic with perceivable hops I thought, mmm. But when you try it it doesn’t seem dominantly hoppy at all with more of a smattering of pepper herbal hop notes behind the dominant zesty lactic sourness and dry lemony notes of many Lambics I have tried. My advice to anyone with this beer is to keep drinking it, because after a short time your perceptions change a little, and that initial biting sourness seems to fade after the first half a pint or so. After which it transcends into a rather mellow rounded maltiness, gentle hops, and perfectly balancing sourness offsets the two. A very rewarding beer, perfect appetizer and brilliant beer altogether, good job I have the head brewers autograph.
Posted by Rob at 10:25 10 comments: