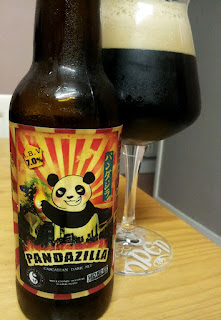 So after a lot of manual work and a lot of waiting for labels to come through we finally have Panda Frog Pandazilla in bottles and released to the wider world. I myself have tried a few at home, though really wished I had stocked up for paternity leave because I honestly favour the bottle-conditioned version marginally over cask or keg. The carbonation, head, lacing and aroma are bang on what I was aiming for. Which is great considering that before we started the whole bottle conditioning kerfuffle we knew there would be variables we couldn't control.

I would advise serving on the cooler side of the textbook 10-12C, on its own or with oriental dishes such as duck chop suey. My food-pairing experiments so far have often pointed me in the direction of dishes featuring a mild sour element. Cider baked pork chops also work well. Alternatively try chocolate, especially dark chocolate based desserts (berry fruit thrown in optionally). But to take things to the next level I would try it with chicken balti (that one kicked my ass). In fact any medium spiced curry or Mexican dish is worth a try.
Posted by Rob at 21:44 52 comments: 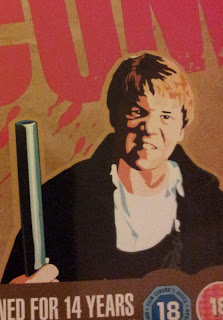 No really. It's a girl look.
It's been a long time coming too and with the poll results I can now confirm that those readers that thought it would be a Chestbuster, Hemaphrodite or a boy were wrong. Being a burly little thing, I could instantly see little Susie one day lobbing around sacks of malt and digging out spent grain from the mash tun (it might happen, you never know). But for the meantime I though it quite appropriate to open a beer, not just any beer though this one I had been saving for quite some time. 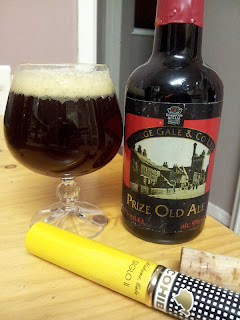 Yep, this one's come right from the back of the ageing cupboard, the oldest bottle of beer I own. The one that when I bought it, I didn't realise that this was probably from the last ever batch of Gale's Prize Old Ale ever brewed under an independant Gale's (before Fullers took it over and put on  500ml crown capped bottles). It's been with me through Christmas after Christmas, birthday after birthday, a graduation, my wedding even, another graduation and numerous 'Open It' events. It's one of the last of it's kind (given this was subjected to aging with the original microflora from the original brewer's wooden vats used to age POA since the 1920's and not the Fullers 'cleverly blended' version).
So what does it taste like? Could it by now have turned to flat vinegar? Or even explosive vinegar fobbing everywhere? Far from it. There's a lot of influence from organisms in the secondary here, you could call it almost Lambic-esque but without the sting. It opens creamy, with fleshy fruity boozy notes, sweet candy, mellow oak and cherries all lifted gracefully by a spritzy carbonation. The sweet cherry candy and oak notes then resonate in the slightly tart finish of subtle sherry-like alcoholic notes.There's almost a bit of Belgian sour red like character about it but the tartness isn't quite at that level.
In short this is pure fermented class. It's a beer thats developed over the years to become what it was meant to be. All it's rough edges and inbalances are gone. It's mellowed and fine tuned itself and stayed preserved to provide someone with an almost timeless moment. I probably won't ever get to try the same beer again. But it was worth it for the moment.
Posted by Rob at 08:56 6 comments: 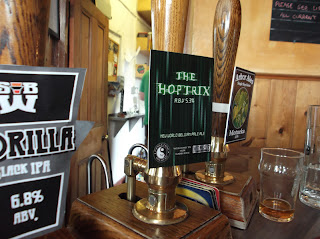 So finally after its unofficial launch at Alnwicks 3 Wise Monkeys,  The Hoptrix has hit the toon and made it into two of my favourite Newcastle pubs, The Free Trade Inn and Lady Greys (both very different and both very complementary to Newcastle's thriving beer scene). As the second instalment of Mordue Brewery's Panda Frog project this Belgian pale cross blonde ale opens with a bold sweet tropical fruit almost pineapple character, herbal undertones and subtle resonating leafy hops before juicy banana late on. Like the last time it was a pleasure to develop. But don't just take it from me, hunt it out now.
Posted by Rob at 17:45 13 comments: 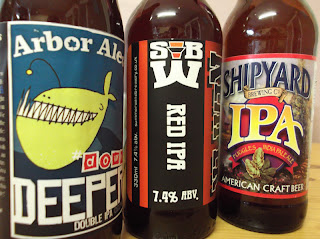 As many of you may know, yesterday was IPA day. At first I was a bit miffed at this. I mean what's it all about? Why isn't there a Stout day? Lambic day? Weizen day? Why IPA? Well all the information you need can be found on the Beer Wench's site and it seems the US craft beer scene event has found its way over the the UK with various venues around the country doing something for it.

Sadly I didn't get manage to get myself to Newcastle's The Free Trade Inn for their IPA showcase as I must remain in a constant state of standby (baby/chestbuster due to arrive any day now). So alternatively I decided to head to Coppers 8 till 8 to pick up just a few IPAs.

So to start things off we have Shipyard IPA, An American IPA brewed in the style of a classic British IPA (an increasingly rare style variant these days). The word fuggles on the label suggested that this would be the best one to start things off with. Pouring a pale gold in colour it sure has plenty of carbonation. Subtle caramelised malt, earthy yeast and hops open things up then the finish turns slightly astringent, sour and a tad cardboard like. It was obviously past its best.

Anyhow, moving we have the bad-ass beast that is Summer Wine Reaper Red IPA, even the name sounds bad-ass. Deep bronze. Aromas of pungent tropical, red fruit and lychee. This is more like it. It opens with a full on assault of resiny citric hop resins, berry fruit and heavy malt backbone before a another huge sappy snap of juicy hops hits you in the finish. A 7.4% no nonsense package of shock and awe that packs a lot in. The echos of the impact last long after the swallow.

So after the throat attack it was time to notch things up for the finale, Arbor Ales Down Deeper 10.4% monster promised much but surprisingly didn't come across as all that aggressive. It pours a pale gold with a slight haze from me accidentally pouring in some sediment. The aroma is straight forward citric hops with fruity esters (apples, pears) yet not as massively pungent as expected. The beer's overall feel is heavy, bold and boozy with lots of fruity viscous alcohols mingling with smooth grainy malt and resiny lime and citric hops. It finishes bittersweet with more tangy lime and citrus hop notes. Well hopped strong ale, yes. Double IPA... Maybe when it was younger.

So that was my contribution to IPA day, normally I would have preferred a more varied range but like I say I have stay on standby.
Posted by Rob at 17:23 2 comments: