Many years ago I thought that the world of beer consisted of 5 or 6 major brands of beer and that was all. For along time I also believed the world of cheese consisted of 5 or 6 major types of cheese, but recently I began to discover just how diverse the world of cheese really is. Admittedly I can't say hunting different cheeses is as exiting as hunting different beers, but pairing beer and cheese I have found highly rewarding. The audience for this event included my wife Helen and both my parents, out of which only my mother could handle the strongest cheeses and high alcohol beer geek beers, but it was all part of the experiment.

Those who remembered my first beer and cheese evening last year will remember many more people going and the whole thing being more of a house party with a cheeseboard on the side. This time the assembly of specific pairings made things far more interesting and organised. So here are the pairings. 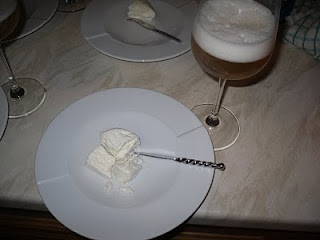 This one went down as an instant winner with everyone, soft, tangy goat's cheese met the crisp, light, mildly citric Belgian Wit. What was outstanding was how the textures molded together whilst gentle citric notes intricately lifted the cheese on the back of spritzy carbonation. Going even better than expected, the likes of fellow blogger Dredgie would term this as a FABPOW (bitchin!). 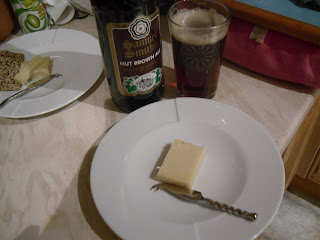 Here I wanted to pair a good brown ale with fairly nutty textured medium intensity cheddar like cheese, but in the end the cheese I was after was unavailable. Its replacement was nutty, gritty, and salty with a slight milky sweetness. Combine this with soft malty grainy, diacetyl influenced classic English brown ale and a decent pairing is found. Soft malt enwraps and softens out the gritty salty cheese whilst the bitterness of the grain builds into the savoury nature of the cheese. Sadly the salty intensity of the cheese overpowered the brown ale a little. 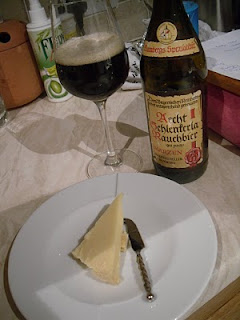 Put together obviously because they're both smoked, and both of similar intensity. Seems logical, and they paired quite well, but not everyone was so fond of the mouthfuls of smokiness. Only two things let this pairing down, firstly the soft cheddar like smokey cheese seemed a little two dimensional, secondly was the absence of the element of contrast. But if you love the smokey flavour this is definately advisable. 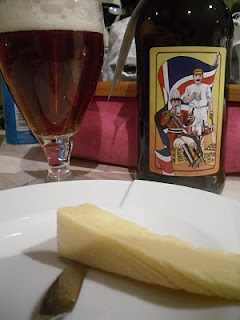 Classic British style IPAs and strong Cheddars are well known to go great together, and this one in particular proved a rather intense pairing. The cheese fruity, salty and acidic with a slight creaminess, whilst the beer plays nicely on this with upfront fruity English hops and sturdy bitterness bringing about tropical fruit like notes in the finish. Sadly our guests found the pairing a little overpowering and to be honest a cheddar of such strength was not needed, so a kind of power struggle on the palate was created between beer and cheese where the cheese kind of won. 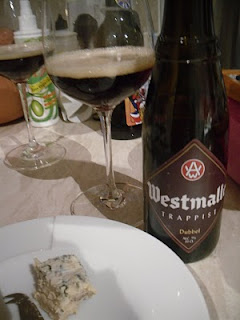 This rather strong creamy blue cheese made an interesting partner for this funky, yeasty, estery, phenolic malty depth of this Belgian double. Knowing the great versatility Westmalle double has for cheese made finding a pairing for it both the easiest and hardest part of organising this event. A decent pairing though with plenty going on, a little harmony, and some contrast. 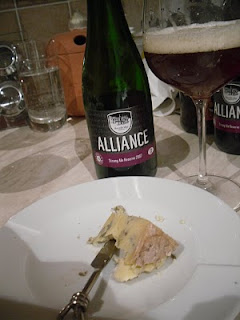 Strong slightly creamy blue cheese meets the silky smooth warming barley wine. Absolutely phenomenal and truly divine. Sadly no one else thought so as no one else liked barley wine or strong blue cheeses. For this was the highlight of the night, even if I was getting a bit bladdered at that point.


So at the end of the day the big question remains; what was the best pairing?
In my opinion the stilton and Alliance came out on top, but by popular opinion the Belgian Wit and goat's cheese won. The others were interesting also, leaving much to experiment with for the next beer and cheese evening.
Posted by Rob at 20:33