The Magic of the Brewhouse (part 2)

You see here at Daleside we believe that brewing and distributing our beer is like spreading our love around Yorkshire and the UK. In this episode of 'The magic of the brewhouse' we see Draymaster Steve and man of action, former badger obsessor Col on the case of racking and stacking some casks for distribution.

Each one of these 9 gallon parcels of love contains 72 pints of joy, ready to be sent out to light up the face of the landlord with joy and fill customers' hearts with glee as they knock back the 5th pint. Also note Draymaster Steve's shive handling skills in this clip. You see Draymaster Steve isn't just called Draymaster as a nick name, he had to train for 18 years with Buddhist dray monks on the mountains of Tibet. Learning to control and maintain a transit van, deliver beer, use a Sat Nav and retrieve empty casks to the brewhouse. After his 18 years with the monks, in 1975 Steve was awarded the Samurai dropbag, the highest honor of a drayman that thus established him as a draymaster. 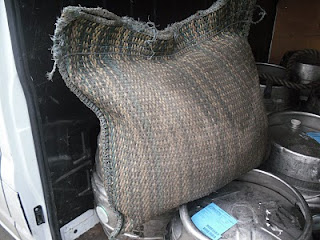 Steve's old dropbag is his most sacred, prized possession only to be touched by the hands of himself or a fellow drayman. So as custom Steve's day always starts with 50 minutes meditation with his dropbag on top of 9 gallon casks before taking to the roads. Distribution can be a tough job, but it's all part of the magic...
Posted by Rob at 09:20

I myself am not a draymaster. I had to drop four firkins off for a beer festival the other night and as I slowly rolled them down a narrow alleyway to the stillage I knew that if only I'd had 18 years training by monks I'd have been able to send the casks in a straight line down the alley with a single kick.