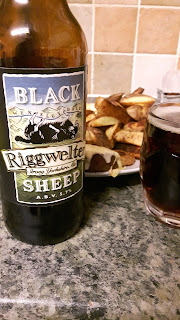 Admittedly I'm not really a beer and food expert. At times I may have been obsessed with it but more specifically beer and cheese was my forte. On beer and food the majority of the time I normally stick to the book (be that Garret Oliver, Dredge, Cole or whoever). However, when you don't have the book or their isn't any 'textbook' pairings on hand, one develops a sort of instinct.

You mentally line the chosen food option with the array of beer options available and take an experiential shot at pairing. Recently I discovered imperial stout doesn't really go with roast lamb dinner. Yet sometimes you find a winning combo from instinct alone. This was how I discovered the delights of cheeseburger with premium brown/Dark ales, and with bacon cheese, chips and coleslaw involved it's even better.

This comes after years of following the textbook consensus of big hoppy pale ale/IPA with the all American burger. It seems as with pizza, cheeseburgers are a highly beer compatible food stuff.
Though hoppy pale beers do pair great with burgers. Hop forward beers seem to carry big flavoursome dishes well and even salads. Here IPA tends to contrast the fat from cheese and bacon.  The premium brown ale latches on to the meaty flavours of the burger.

Although my two best experiences of this have used Hobgoblin and Riggwelter I'm sure more craft elite friendly options like India Brown ales would work just as well.