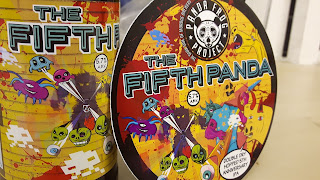 The 5th Panda is an anniversary IPA that's pale golden, brewed with five different hop varieties; Simco, Equinox, Citra, Chinook and Waimea. Aiming to divert from my often Centennial heavy approach to the likes of Pandamonium IPA and X2. Despite being a similar abv this beer is paler than Pandamonium and about 40% less bitterness units. Fruity, tropical, sweet lemon and light bodied for drinkability.


Different from regular seasonals Panda Frog beers are conceived as more expermental, personalised recipies usually designed a year in advance of brew day so the wait is long. It's often interesting nearer the time to rejuvenate the past vision of what the past version of oneself was thinking back then. 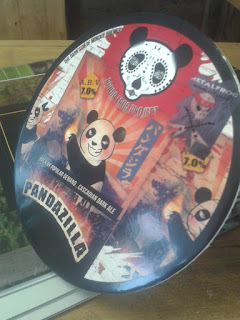 Our label artist Oliver Fowler has undoubtedly done us proud. I will never forget Pandazilla winning at SIBA north or Dartfrog-48 Dunkel Rye Weizen getting beer of the festival at Durham beer fest ether. These days the project is fronted by Pandarillo, Allelic Drift and Pils holding the line. Whereas back in the day it was rare to see more than one PF beer in the brewery at any time. Some points in the year there were none.

I would also note that a lot of Panda Frog goes to wholesalers so it could literally appear nearly anywhere in the UK. Beer 52 and Flavorly have distributed our bottled beers far and wide and we're also getting kegs to SIBA Beer X this year.