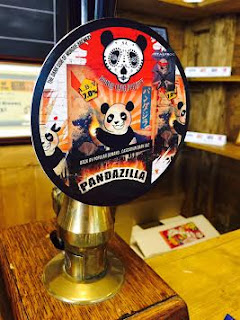 That's right, we have finally brought it back. It was way back in 2012 when the 7% Pandazilla made its debut as the first-ever release from Mordue's Panda Frog side project. I certainly blogged about it enough at the time and since then we've had plenty of requests to bring it back.

This up-scaled version of the original was to be a highlight brew day of 2015. Notably we didn't get quite enough carafa malt for it and hopping rates are slightly increased but overall it's pretty much the same beer. I'd comment that the big coffee front from the 2012 version isn't as obvious. I will let you make your own mind up about it.

Pandazilla it to be unleashed in cask, keg and bottle form. Long standing Panda Frog artist Oliver Fowler's new take on the original label is also very cool. Hunt it down now.