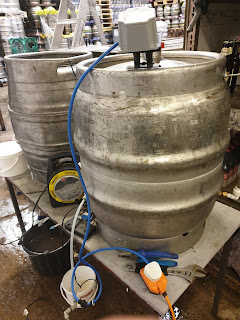 The 80-litre trial brew plant is a relatively new addition to the Daleside kit, invented by former brewer Matt Bloomer. Although quite basic it's still more impressive and easier to use than my former 20-litre home brew kit.

This time round I would be brewing an experimental brew that might make the upscale or might be just for the hell of it. It will be featured at Harrogate Beer Festival 2020 March 6th - 7th.

Emily is a dry-hopped apricot Saison at 5.5% brewed with Galaxy and Cascade hops and an apricot puree. The abv would have been a bit lower if it weren't for underestimation of the aggressive nature of saison yeasts.

The fermentation temperature on this was let go a little as with many traditional Belgian ales though didn't go past 26 °C.

The name Emily bears no specific reference to anything although I did know someone called Emily at Uni and she was from Yorkshire but the name was more to do with it being one my favourite girls names.

On tasting Emily is dry and boozy with up front tropical banana and fleshy apricot going on. There's some spicy phenolics and hot alcohols underpinning it that the fruit partly masks but I'm hoping they age out. Overall I was quite pleased with Emily, she had some rough edges but I do look forward to trying her from the cask at Harrogate Beer festival.