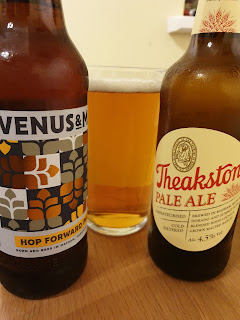 Rivalry is a natural occurrence in the brewing industry. Sometimes it's between the upstart and the long-established and sometimes it's a history that goes way back. Like the school playground, the brewing world segregates itself out into different social groups that generally all get along, although occasionally that isn't so.

Here at Daleside we don't really do rivalries so much. Or at least not in the same sense as the ones in the North East brewing scene. That was more equivalent to say The Hunger Games or underground dog fighting by comparison. I am aware the friendly folk of Roosters Brewery have a long history with Daleside that goes way back and we have great respect for them.

Anyhow, I thought it would make a good blog post to taste off these two rival beers from rival brewers. A majority of people in brewing know about the history between the Theakston brothers and thus the long history between Black Sheep and Theakstons, both Masham based. Both big family brewers. But both beers happen to be  bottled, filtered pale ales at 4.5%.

First up, in the red corner we have Theakstons Pale ale using Summit, Cascade and El Dorado hops over a base of lager and Munich malts. Nice classy label. In the blue corner we have Black Sheep Venus and Mars brewed with Pale and Caramalt hopped with First Gold, Summit and Chinook. The Theakstons Pale ale is poured first and this pale golden beer opens with orange and stone fruit at the fore. There is a little sweetness but a dry feel to it, a little bit old school, a tad flinty but overall well composed.

Next up, Black Sheep Venus and Mars pours a shade darker. There is a more upfront citrus aroma and flavour about this beer, but it's not the sort you would get from using a shed load of resinous C hops. It's more perfumed and catty and the beer has that signature Black Sheep rounded fullness to it with stone fruit and some orange notes.

On the whole my impressions are Black Sheep have dressed things up more, the aroma is more obvious and they've put more effort into making things more contemporary. On the other hand Theastons Pale ale is more down to earth. Where it scores in being a tad more complex it loses out in approachability compared to its rival. A close match but for me Theakstons win this one, however the problem here is  neither beer ranks in the top tier stuff that either brewer has done -Imperial Russian Stout, Riggwelter, 54 degrees North, Old Peculiar and XB. But all in all an interesting brew battle.
Posted by Rob at 17:52